"The way to peace is through negotiations, we are willing to have direct negotiations, they are not willing to. That is preventing peace not a few houses in Jerusalem and Ma'ale Adumim." 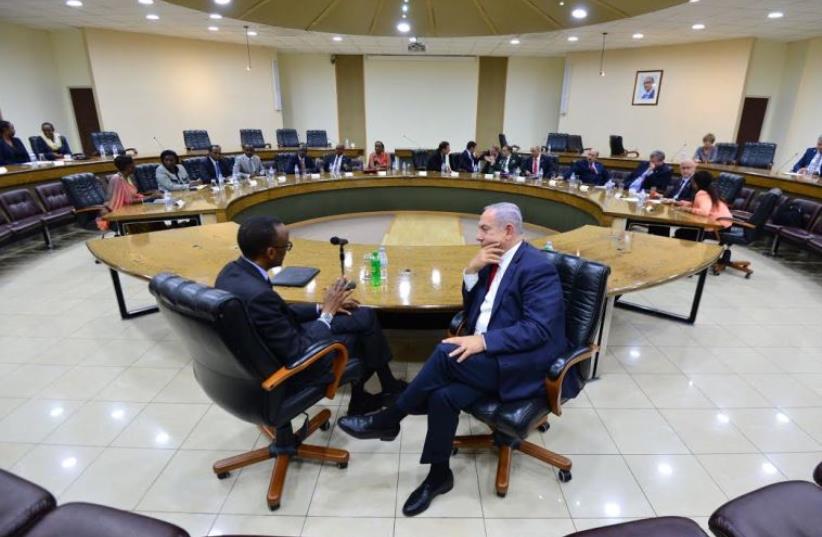 Prime Minister Benjamin Netanyahu meets with Rwanda President Paul Kagame
(photo credit: KOBI GIDON / GPO)
Advertisement
KIGALI - The 1994 genocide in Rwanda teaches that nations cannot turn their security over to international forces, Prime Minister Benjamin Netanyahu said here, in an obvious reference to calls to have international forces serve as a buffer between Israel and a possible Palestinian state.“In Rwanda, UN peacekeepers failed to keep the peace. They not only failed to keep the peace, they failed to respond to urgent calls for salvation against an impending genocide,” he said at a press conference with Rwandan President Paul Kagame, just hours after visiting the memorial to 800,000 people, mostly Tutsi, killed by Hutu.The UN peacekeepers ran away, he said. “We cannot, neither one of us, outsource our safety and our security.”Netanyahu also used the Rwandan experience to drive home another point, “words matter, they have the power to kill.”“In Rwandan radio broadcasts dehumanized people long before they were slaughtered. You asked for the broadcasting to stop, it was part of your battle against genocide before it began. And you were unsuccessful,” he said.Netanyahu said the Nazis also began dehumanizing Jews long before they started murdering them. “So today, when we see leaders in Gaza calling for the murder of every Jew around the world, we all have a duty to speak out. When we hear the Supreme Leader of Iran calling for the annihilation of Israel, we have a duty to speak out.”.Asked at the press conference -- which followed a meeting between the two leaders at Kagame’s residence -- about sharp US criticism of plans to build new housing in Ma’ale Adumim and east Jerusalem, Netanyahu said that it was incitement, not the building of a few homes, that was holding up peace.“We know the US position, it is not new, and not acceptable to us,” he said. “Building in Jerusalem and Ma’ale Adumim is not, in all due respect, distancing peace. What is preventing peace is the continuous incitement against the existence of Israel within any borders, and it is time for the nations of the world to recognize that truth.”And, he added, there is another simple truth, that the way to solve problems is through negotiations, which Israel is willing to do, and they are not.“Those are the things that are preventing peace, and not another few apartments by the Maale Adumim municipality or in east Jerusalem,” he said.Netanyahu also addressed an issue that has not yet been raised publicly during his meetings in Africa: the plight of African migrants in Israel.Netanyahu took issue with the characterization that they were seeking asylum, saying instead that they are “job seekers.”Israel, he said, has an obligation to “regulate its borders,” adding in a reference to Ethiopian Jews that Israel is the only country that “transported black people out of Africa” not as slaves. Kagame dodged a question about whether there was a secret agreement whereby Israel was repatriating African migrants to Rwanda, Ethiopia and Uganda. He said no issue was “taboo” to talk about between leaders, but he would not go into any detail.