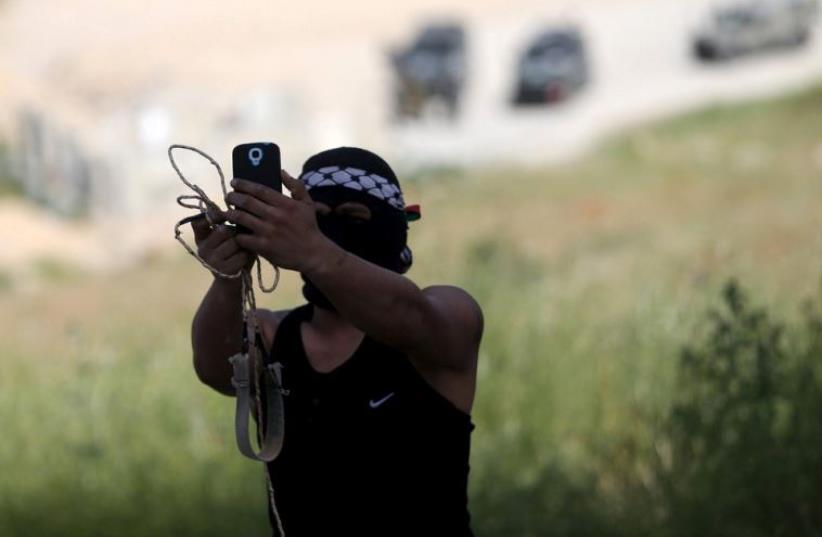 A Palestinian protester takes a selfie in front of Israeli troops during clashes near Israel's Ofer Prison near the West Bank city of Ramallah
(photo credit: REUTERS)
Advertisement
Stepping up his efforts to thwart the French diplomatic initiative calling for a summit in Paris later this month to discuss the parameters of a peace deal, Prime Minister Benjamin Netanyahu argued against the plan in a meeting Monday with visiting Belgian Foreign Minister Didier Reynders.According to the Prime Minister’s Office, Netanyahu said the French initiative “allows the Palestinians to avoid direct negotiations, thereby making peace more remote.”On Sunday night, the first night of Reynders’s three-day visit to the region, he said in Ramallah that Brussels backs the French plan.“We are supporting the French initiative,” he said during a press conference alongside PA Foreign Minister Riyad al-Maliki, “because we need to do something. We need to have at least a conference, and then maybe to start a process,and we are very open to take part if possible...in such a process.”No press conference, or even a statement to the press, was held before or after Reynders’s meeting with Netanyahu.Israel rejected the French plan last month, with the PMO issuing a statement saying Israel “adheres to its position that the best way to resolve the conflict between Israel and the Palestinians is direct, bilateral negotiations. Israel is ready to begin them immediately without preconditions. Any other diplomatic initiative distances the Palestinians from direct negotiations.”Reynders postponed a visit to Israel in December after Netanyahu canceled a scheduled meeting with him because Belgium supported labeling Israeli products from the settlements.At the time, Netanyahu said he was suspending the EU’s role in the peace process because of the issue.According to the PMO, the two also discussed the threat of radical Islam to Europe and the region, and Reynders thanked Israel for its offer of assistance and cooperation following the recent terrorist attack in Brussels.The opposition to the plan voiced by Netanyahu on Monday is expected to be stated even more forcefully next Sunday when he meets French Foreign Minister Jean-Marc Ayrault, who will be in the region to discuss the initiative. Neither Israel nor the Palestinian Authority has been invited to attend the summit, which is scheduled for May 30.While Israel has rejected the initiative, the Palestinians have endorsed it enthusiastically.It is not clear, however, whether the conference will take place as scheduled, because US Secretary of State John Kerry, whom the French want at the summit, is scheduled to be in Vietnam at the time.Government sources said it is still not clear whether Kerry – who is currently in Paris and believed to be holding discussions on this and other matters – will attend the conference.With the US in the midst of an election campaign, the question is how much it will want to turn over a central role in the diplomatic process to the French.It is also not immediately clear when the Quartet – the US, Russia, the EU and UN – will issue a report it has been working on for months regarding steps it believes the sides need to take to break out of the current diplomatic logjam.Israel is bracing for a report that will slam settlement construction and its policies in Area C, and is working through diplomatic channels to try to moderate some of the language. The bigger concern in Jerusalem, however, is that the report will either have operational recommendations, or will form the basis of a set of parameters that will then be taken to the UN Security Council for its endorsement.