Olmert not retiring, but not returning to politics

While in prison, Olmert completed writing an autobiography that was confiscated two weeks ago from his publisher by the state prosecution. 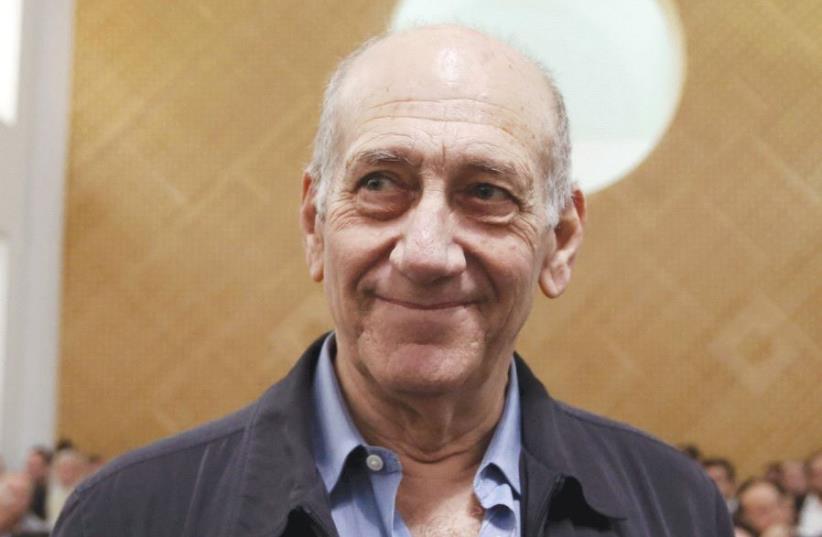 FORMER PRIME MINISTER Ehud Olmert waits for the judges at the Supreme Court in 2015
(photo credit: GALI TIBBON POOL/REUTERS)
Advertisement
When former prime minister Ehud Olmert becomes a free man on Sunday following the parole board’s decision, he intends to rest briefly and then return to business, his associates told The Jerusalem Post.Sources close to Olmert said the week he spent in the hospital helped start his recovery from the rapid weight loss he suffered in prison. They said the 71-year-old’s first goal upon leaving Ma’asiyahu Prison will be to work with his doctors and family on restoring his health.Olmert then intends to seek a pardon from President Reuven Rivlin. When Rivlin rejected a pardon request in March, he indicated that if Olmert were paroled, he could issue a pardon to remove the prison’s requirements that he check in regularly with police and receive approval for every trip abroad.While in prison, Olmert completed writing an autobiography that was confiscated two weeks ago from his publisher by the state prosecution.Olmert intends to promote the book ahead of Rosh Hashana, when it is scheduled to be released. He will resume his business interests in Israel and abroad and will not return to politics, sources close to him said.Associates expressed appreciation to rightwing ministers Naftali Bennett, Israel Katz and Ze’ev Elkin for publicly calling for mercy to be given to Olmert at his parole hearing, despite their political differences. Sources close to Olmert said he would not respond to his critics.MK Shelly Yacimovich wrote on social media that it angered her that “obsessive attention was being given to Olmert, while criminals who are less well known are being ignored.”Her Zionist Union colleague MK Miki Rosenthal said Olmert should not dare consider following in the footsteps of convicted felon-turned-Interior Minister Arye Deri and attempt a political comeback.“Olmert the individual can be forgiven, but the public figure however can never be forgiven,” Rosenthal said. “He was a serial lawbreaker who betrayed the public’s trust, did not express remorse and tried to pass the buck and incriminate his secretary.”Former Likud MK Moshe Feiglin said Olmert should have stayed in jail for the rest of his life.“Shortening the jail time of Olmert, the father of corruption, shames the memory of the soldiers he sent to die for his own political reasons in the Second Lebanon War, as well as those who fight for clear governance,” he said.Knesset Speaker Yuli Edelstein told reporters in Russia that he welcomed the decision and wished Olmert a full recovery.Lahav Harkov contributed to this report from Moscow.