Open mic picks up what PM really thinks about EU

Netanyahu also talks about relations with US, IDF actions against Hezbollah. 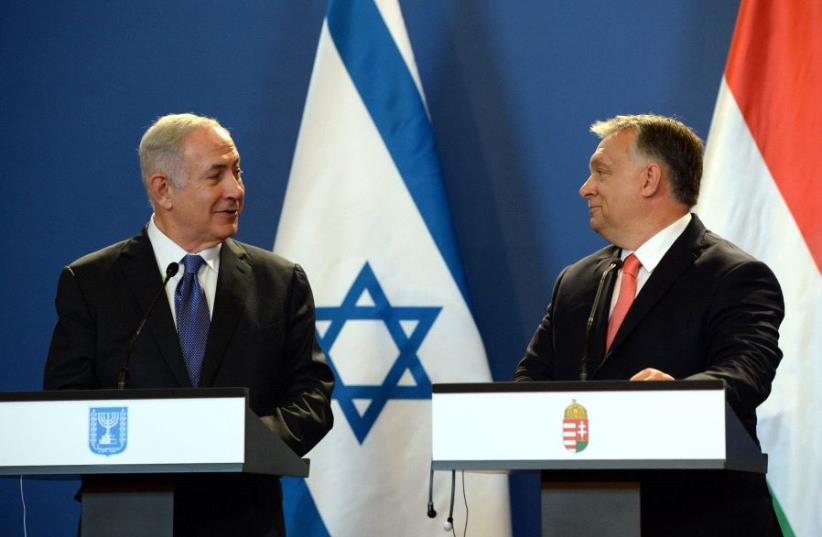 Netanyahu and Orban
(photo credit: CHAIM ZACH / GPO)
Advertisement
The EU’s policies toward Israel are “crazy” and self-defeating, Jerusalem had a “problem” with former US president Barack Obama, and the IDF has hit arms transfers to Hezbollah in Syria dozens of times, Prime Minister Benjamin Netanyahu told four European leaders in Budapest on Wednesday, during a closed meeting that was inadvertently caught by an open microphone.“We have a peculiar situation: The European Union is the only association of countries in the world that conditions the relations with Israel – that produces technology in every area – on political conditions.The only ones,” he said. “We have a special relationship with China and they don’t care about the political issues.”The comments were made during what Netanyahu believed was a closed session with his counterparts – Hungarian Prime Minister Viktor Orban, Czech Republic Prime Minister Bohuslav Sobotka, Polish Prime Minister Beata Szydlo and Slovakian Prime Minister Robert Fico – but because of an open microphone were inadvertently broadcast to journalists in a nearby room.Netanyahu referenced the recent visit to Israel of Indian Prime Minister Narendra Modi, saying that the Indian leader said he needed to take care of India’s interests.“‘I need more water, clean water. Where will I get it? Ramallah?” Netanyahu quoted the Indian leader as saying.He said only the EU was placing political conditions on upgrading its bilateral ties with Israel.“I think it is crazy, I think it is actually crazy,” Netanyahu said. “I am not talking about my interests, Israel’s interests; I’m talking about Europe’s interests.”He asked his counterparts to communicate to their colleagues the need to push forward the EU-Israel Association agreement that has been frozen since Operation Cast Lead in 2008-2009. He said that Europe was undermining its own progress by “undermining its connection with Israeli innovation by a crazy attempt to create conditions.”“Don’t undermine the one European Western country that defends European values and European interests, and prevents another mass migration to Europe – stop attacking Israel, start supporting Israel,” he said.“I think Europe has to decide if it wants to live and thrive or if it wants to shrivel and disappear,” he added. “I am not very politically correct.I know that’s a shock to some of you. It’s a joke. But the truth is the truth – both about Europe’s security and Europe’s economic future.Both of these concerns mandate a different policy toward Israel.”Diplomatic officials in Jerusalem said that beyond the “wow” factor of the comments from a private meeting being aired live, there was nothing substantially new in the remarks, and that the criticism Netanyahu leveled against the EU in what he thought was a private conversation was the same type he has articulated numerous times in the past, both publicly and privately.The same could be said about his comments about Obama and IDF actions against arms deliveries to Hezbollah.Regarding US Middle East policy, Netanyahu – in a clear reference to the former president with whom he had a famously fraught relationship – said, “We had a big problem.It think it is different now. Vis-a-vis Iran, there is a stronger position. The US is more engaged in the region and conducting more bombings [in Syria]. It is a positive thing. I think we’re okay on ISIS. We’re not okay on Iran.”As for the situation in Syria, Netanyahu said he told Russian President Vladimir Putin, “When we see them transferring weapons to Hezbollah, we will hurt them. We did it dozens of times.” That did not lead to a clash with Russia, he said.Netanyahu and the other four leaders addressed the press after the meeting, with Netanyahu quipping that the press already had a rather full briefing.The prime minister said that Israel serves a unique function as “the one Western country in the region, the one country that is able to limit and fight from the region, within the region,” the common danger of militant Islam.He reiterated what he said in the closed meeting about the need for Europe to cooperate more closely with Israel.“It’s time to have a reassessment in Europe about the relations with Israel,” he said.“We have much to offer each other. We have much to offer in the realm of security, much to offer in the realm of technology.This is not only good for us, but I believe good for you.”He announced that the next meeting of the Visegrad Group – Hungary, Poland, the Czech Republic and Slovakia – will be held in Jerusalem.Orban reiterated “our acknowledgment toward Israel for what it does for the security of Europe,” and said if Europe does not cooperate with Israel, “it is punishing itself, which is pointless.”Netanyahu held a bilateral meeting with Orban on Tuesday and met separately with each of the other three leaders on Wednesday. He is scheduled to return home on Thursday.