When Biden came in 2010, Peace Now revealed that a building project in Jerusalem's Ramat Shlomo neighborhood had been advanced, leading to the administration accusing Netanyahu of "humiliating" VP. 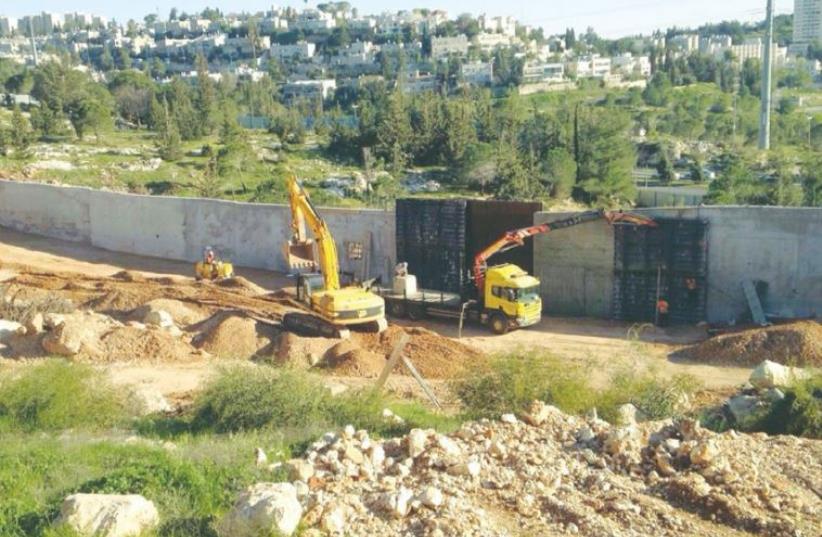 CONSTRUCTION VEHICLES prepare a housing site in the capital’s Ramat Shlomo neighborhood last week.
(photo credit: COURTESY PEACE NOW)
Advertisement
Peace Now is attempting to sabotage US Vice President Joe Biden’s visit to Israel for the second time, the organization NGO Monitor and right-wing MKs charged on Tuesday.When Biden was in Israel in March 2010, Peace Now revealed that a building project in Jerusalem’s haredi (ultra-Orthodox) Ramat Shlomo neighborhood had been advanced from one initial stage in Israel’s long building process to a second preliminary stage. The report led to US President Barack Obama’s administration accusing Netanyahu of “building a new settlement” to humiliate Biden.On Monday, the eve of Biden’s current trip, the organization distributed pictures of the project advancing another stage despite promises from Prime Minister Benjamin Netanyahu that it would not be built.“Peace Now is a political opposition group – they are anti-Netanyahu, as both the substance and timing of this press release demonstrate,” NGO Monitor head Gerald Steinberg said. “The Ramat Shlomo neighborhood is on the edge of the Green Line [the 1949 armistice line] and will certainly be part of any Israel in any peace agreement, regardless of who leads the Israeli government. But by again pushing this issue to coincide with a visit by Vice President Biden, the NGO, which is funded in part by European officials not friendly to Israel, is further trying to embarrass and hurt the Netanyahu coalition.”The head of the Knesset’s Land of Israel caucus, Likud MK Yoav Kisch said “sabotaging Israel’s foreign relations is a strategy that, unfortunately, we hear more and more from leftwing NGOs in Israel.” Peace Now, he said, should use its resources for positive steps instead of harming Israel’s relations with the United States.Yisrael Beytenu faction chairman Robert Ilatov said Israel was facing a lose-lose situation.“On the one hand, the prime minister is not building in Judea and Samaria, even in places that will be part of Israel in any future agreement, while on the other hand, Peace Now, like other extreme leftwing organizations, acts to cause as much damage as possible to Israel’s image, even if it means lying to achieve that goal,” Ilatov said.Bayit Yehudi faction head Shuli Moalem-Refaeli warned that “the extreme left-wing is causing Israel’s isolation and sabotaging the state’s foreign relations,” saying “their behavior and provocations prove they don’t care about Israel.”Deputy Regional Cooperation Minister Ayoub Kara (Likud) said, “The time has come for Peace Now to stop cooperating with the haters of Israel, which has the right and obligation to build in its territory.”Peace Now Secretary-General Yariv Openheimer responded that it is the government’s actions that harm relations with the US, not his organization for revealing them.“They are trying to kill the messenger rather than dealing with the criticism of their actions,” Openheimer said. “They think everyone is to blame, except the occupation.”