The country has also consistently either voted for Israel, or abstained, on Israel-related votes in international forums, since Cartes’ election in 2013. 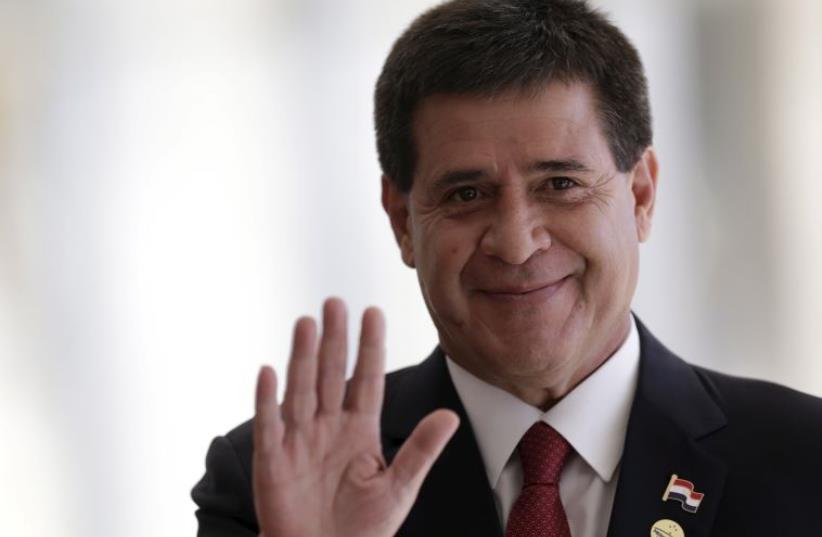 Paraguay's President Horacio Cartes
(photo credit: UESLEI MARCELINO/REUTERS)
Advertisement
Israel does not take its friends for granted, and Paraguay's friendship during difficult times is highly appreciated in Jerusalem, Prime Minister Benjamin Netanyahu told Paraguay President Horacio Cartes on Tuesday.Netanyahu said that Paraguay is an anchor of friendship for Israel in South America, from which it hopes to spread out and improve ties with other countries in the region. His comments came after a meeting in his office with Cartes, the first Paraguayan president ever to visit Israel.Cartes stood by Israel during the Operation Protective Edge, and did not condemn Israel even though some other Latin American states were extremely critical, and some – such as Brazil, Peru, Chile, El Salvador and Ecuador – recalled their ambassadors in protest at Israel’s actions.The country has also consistently either voted for Israel, or abstained, on Israel-related votes in international forums, since Cartes’ election in 2013.The visit, Netanyahu said, reflects both Cartes’ personal friendship towards Israel, and certain historical parallels between the two countries: “Small countries surrounded by a lot of big countries, not always on the friendliest terms.”Less than two weeks since returning from a groundbreaking visit to Africa, where Netanyahu promoted Israel's ties with that continent, the prime minister said Tuesday that Israel wanted to expand its ties with Latin American countries.“You have been an anchor of friendship there. And we are eager to discuss with you the possibilities of increasing our cooperation with all the countries of Latin America, which we think is a continent that has a great future,” he said. Cartes, who arrived on Sunday for two days, noted at the outset of his comments that Paraguay voted for the Partition Plan in 1947, and that both Israel and Paraguay declared Independence on May 14, with Israel doing so in 1948, and Paraguay making the move in 1811.He said that the two nations have something else in common as well: genocide. He noted that most of the country's population was wiped out in the War of the Triple Alliance between Paraguay and Argentina, Brazil and Uruguay between 1864- 1870. Some 300,000 Paraguayan soldiers and civilians were killed then, estimated at 70% of its total male population.“But I don’t want to be the country to be remembered because of the vote, because we had the holocaust,” Cartes said. “I want to see our countries much closer because we share principles and values.”The Paraguayan president said that “we need to be ashamed” that despite the friendship between the two states, this is the first trip to Israel by a Paraguayan president.The two leaders signed a number of bilateral agreements, including a Memorandum of Understanding regarding Israeli assistance to technological developments in Paraguay. They also agreed to cooperate in a variety of fields, including security, agriculture, water and education