Presidential hopeful outlines where the next president must take US-Israel relationship. 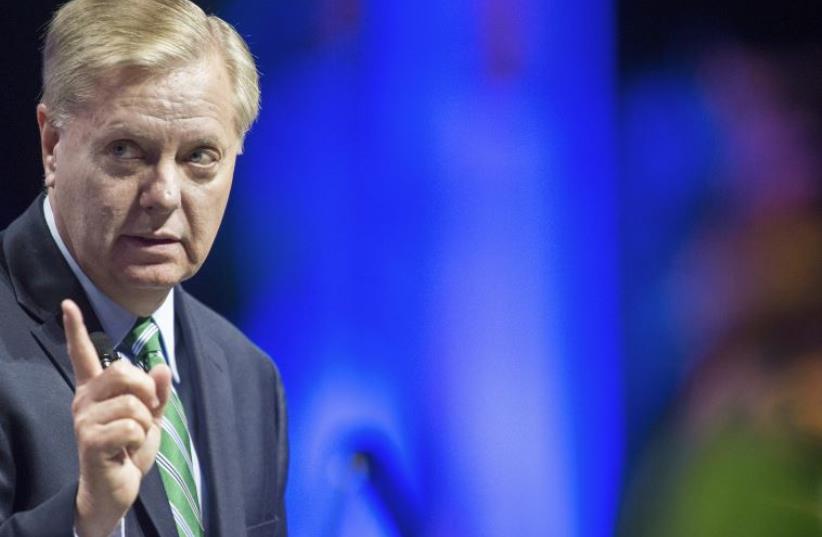 Lindsey Graham at CUFI summit
(photo credit: DPA PICTURE-ALLIANCE/AFP)
Advertisement
WASHINGTON - Attending a black-tie dinner in honor of Prime Minister Benjamin Netanyahu on Monday night in Washington, two men decided to dress down: The Israeli premier himself, sporting his signature blue silk tie, and Senator Lindsey Graham of South Carolina.Making his way through the crowd of 2,000 toward his seat, stopping to greet fellow hawks former Vice President Dick Cheney and diplomat John Bolton, Graham appeared comfortable in his gray suit and his surroundings: Enveloped by like-minded men and women, prepared to honor, as Weekly Standard editor Bill Kristol told the crowd, the "preeminent leader of the free world."In an interview with The Jerusalem Post, Graham – a presidential hopeful running for the Republican nomination – outlined where the next president must take the US-Israel relationship, and why his GOP rivals have thus far failed to differentiate themselves from the policies of US President Barack Obama."The Obama administration has empowered the chief antagonist of the state of Israel with more money, more weapons and a pathway to the bomb, and they think they can fix it by empowering the Israeli military," Graham said. Earlier in the day, Obama hosted Netanyahu at the White House to discuss an increase in US defense assistance to the Jewish state. "Any Republican candidate who wants to police this deal doesn't know what they're doing. Any Republican candidate who thinks you can police this deal is out to lunch."Several of his rivals have proposed precisely that approach to the Joint Comprehensive Plan of Action, the formal name for the nuclear deal reached between world powers and Iran this summer. Among them are Jeb Bush of Florida and Donald Trump of New York."The goal is regime change. I don't want to invade Iran, but the biggest loser of this whole transaction is the Iranian people," Graham continued. "I'm all for selling Israel more weapons, but there's not enough weapons you can sell or give them to protect them against an ayatollah with more power.""This is no different to me than giving Hitler access, you know – this is the 1930s all over again," he added.On the Democratic side, Hillary Rodham Clinton, former secretary of state under Obama, also has proposed strict enforcement of the deal throughout its 15-year lifespan. In September, she criticized the Obama administration for allowing so many of its debates with the Netanyahu government to air out in public."I don't think it's a particularly productive course for the US to take" in public, Clinton said at the time. "It opens the door for everyone else to delegitimize Israel and to pile on."Graham responded to Clinton's criticism with a touch of praise. "She is correct that a public rebuke of Israel empowers Israel's enemies," he said, before reposting with criticism: "The fact that you won't rebuke Israel in public," he continued, "is not a substitute for taking a deal that empowers its chief antagonist with the capability to destroy the Jewish state."The senator is polling poorly across the country and will not participate in Tuesday night's Republican primary debate – the fourth of this election cycle. Previously, Graham has participated in "undercard" debates that ran before the main events with leading candidates. But Graham has been bumped from Tuesday night's undercard showing, as well.Graham, who has represented South Carolina in the Senate since 2003, has visited Israel more than any other foreign nation during his time in office. One recent visit came shortly before he announced his run for the presidency.He believes the timing for negotiations between Israel and the Palestinians is inopportune."How could Israel negotiate a two-state solution when the neighborhood in which she lives is completely falling apart?" the senator asked. "The reason there is no pathway forward is because the region is going to hell in a handcart."Does that mean an independent Palestine cannot be founded until someone fixes the Middle East?"There's no place for a Palestinian state," he said, "until the Palestinian people reconcile amongst themselves: Who are they? Are they people who will live in peace with Israel?"