A spokesperson for the president said haredi representatives had been invited to attend. The theme of the unity session is remembering the past and educating for the future. 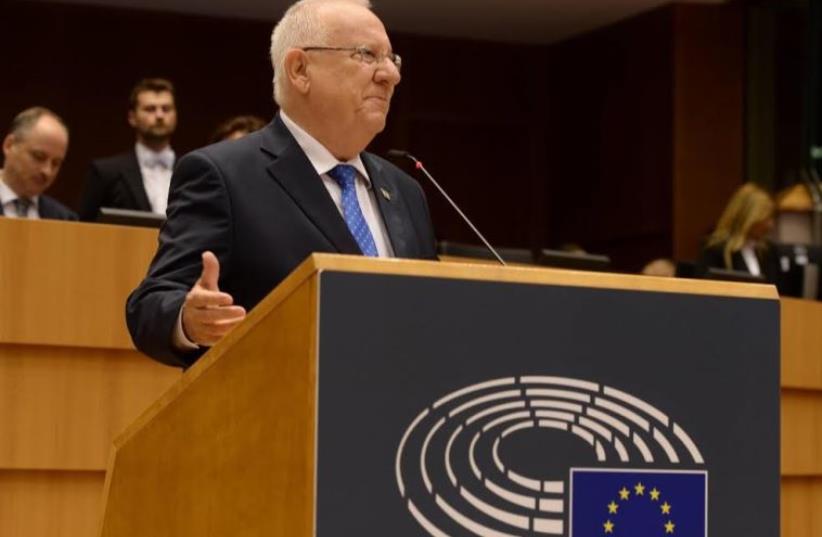 President Rivlin Addresses EU Parliament
(photo credit: Mark Neiman/GPO)
Advertisement
It is no secret that early in his presidency, President Reuven Rivlin offended the leaders of the Conservative and Reform movements.Later, he tried to make up for it by saying that all Jews are brothers. Later still, together with the Jewish People’s Policy Institute and with the backing of Rabbi Benny Lau, with whom he has a very close relationship, Rivlin hosted a pre-Tisha Be’av conference last year at the President’s Residence.In the interim he had met with the American leadership of the Conservative and Reform movements. The meetings had been cordial and of a reconciliatory nature, but Rivlin had refrained from endorsing their requests for equal status for all Jews from all streams of Judaism.When Rivlin was in the United States last Hanukka, he participated in a function sponsored by the United Jewish Appeal Federation of New York and attended by rabbis of different denominations. He said then that it was important for the State of Israel to show full respect and sensitivity to all American Jews. “It is important to remember that we are all one family,” he said.Since then, Rivlin has continued to promote an ideal of Jewish unity. Toward this end, together with the Jewish People Policy Institute, he will once again host a pre-Tisha Be’av conference and study session with Reform, Conservative and Orthodox Jews.A spokesperson for the president said haredi representatives had been invited to attend. The theme of the unity session is remembering the past and educating for the future.The session will be opened by Rivlin and Jewish Agency chairman Natan Sharansky, who has been an outspoken advocate for accepting Reform and Conservative conversions, not to mention those of Orthodox Rabbi Haskel Lookstein.Unless they are accepted, there is no way for non-Orthodox Jews to feel that Israel is their home, Sharansky has argued.Other speakers on Thursday will include: Noam Dan, former head of Binah – the Jerusalem Secular Yeshiva’s pre-military academy; Rabbi Dalia Marx, PhD, associate professor of liturgy and midrash at Hebrew Union College; Rabbi Avi Novis-Deutsch, dean of the Schechter Institute of Jewish Studies; and Rabbi Yermi Stavisky, principal at Himmelfarb High School.The respondent will be Israel Prize laureate Eliezer Schweid, professor of Jewish philosophy at the Hebrew University of Jerusalem.The event will be moderated by prize-winning journalist Shmuel Rosner, who is a senior fellow at the Jewish People Policy Institute