The Ayalim Association was established in 2002 by a group of released soldiers who took up the challenge of creating communities in the Negev and the Galilee. 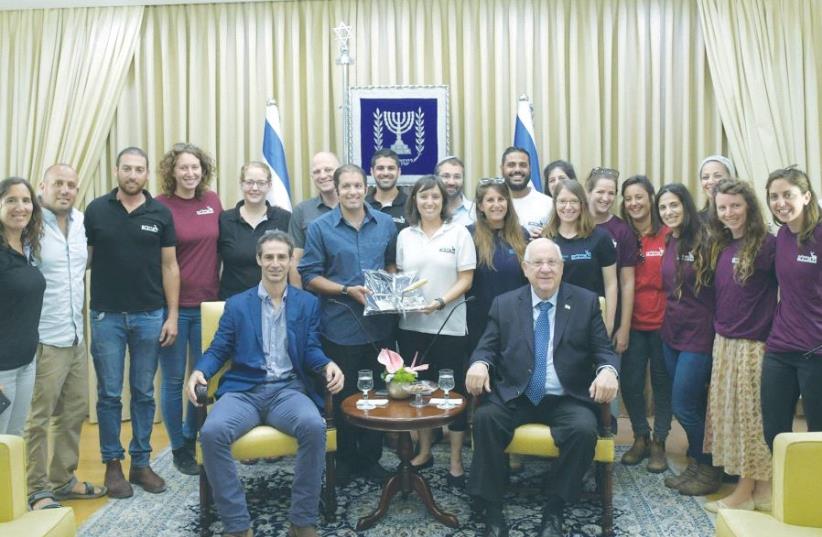 PRESIDENT REUVEN RIVLIN poses with managers of Ayalim, an organization that operates student-run villages in the Negev, Galilee and other peripheral areas, at the President’s Residence yesterday.
(photo credit: AMOS BEN GERSHOM, GPO)
Advertisement
“This is true Zionism,” declared President Reuven Rivlin on Sunday at the President’s Residence where he met with some 20 managers of student villages in the Negev, the Galilee and peripheral areas of central Israel.The managers, who are students themselves, are members of the Ayalim Association, which was established in 2002 by a small group of young adults who had completed their mandatory army service and took up the challenge of creating communities in the Negev and the Galilee. They did this by establishing student villages in the hope that the young people who populated them would create new communities in the area or join existing ones.Recalling a visit to an Ayalim village in Lod, Rivlin said that he was awestruck by what the village contributes to the surrounding community, and the sense of mission in each of the young people whom he met. He told one young man who particularly impressed him with his dedication to community needs and the needs of individuals in the community, that one day he would be a Knesset member. Today that young man, Izik Shmuli, is a Zionist Union MK.Matan Dahan, one of the founders of Ayalim, said that most of its members are grandchildren of pioneers who came to Israel a century or more ago. Instead of absorbing the post-Yom Kippur War values of their parents, he said, “We have the DNA of our grandparents.”Many Ayalim members have no religious, national or political ideology and are motivated, instead, by a desire to work for the common good. Yaki Dayan, a former Israeli consul general in Los Angeles and currently chairman of the Ayalim administrative board, said that Ayalim has a diverse member base and that they all live together in harmony and mutual respect.Many American Jews who want to connect and identify with Israel, but not on a political or religious level, see Ayalim as an exceptional means of realizing this ambition, he said.There are currently some 1,300 students in its villages – a number Ayalim hopes to double over the next three years.Ayalim relies largely on donations from abroad to fund its operations.The annual Ayalim budget, with the exclusion of construction costs, is NIS 22 million. A large portion of that money comes from the United Israel Appeal. This year, for the first time, it received a small budgetary allotment from the Education Ministry.In addition to strengthening peripheral communities, Ayalim also provides housing solutions for young couples. Ayalim is a means of contributing to Israel’s future and to personal fulfillment, said Dayan.“Within three years, we want to change the face of the Negev.”To achieve this goal, Ayalim plans to set up 18 additional student villages.Once there are numerous populated areas throughout the Negev, Dayan explained, many more people will be willing to live there.Dahan was optimistic that once this happens, the government will be much more forthcoming with funding. “We have learned that when you have enough people and a movement behind them, the government comes to the party – albeit unwillingly,” he said.