“All incitement against the LGBT community must stop,” Rivlin insists. 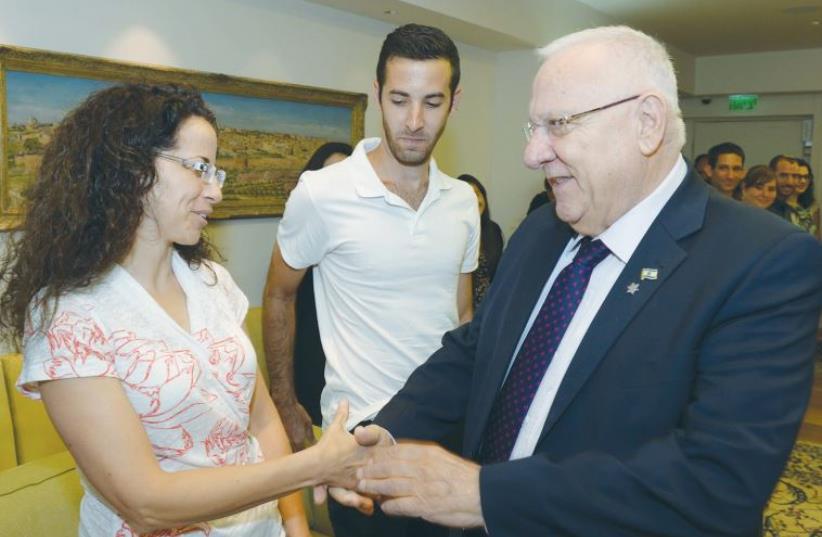 PRESIDENT REUVEN RIVLIN greets Mika Banki, mother of Shira Banki, at the President’s Residence yesterday.
(photo credit: GPO)
Advertisement
July 30 will mark one year since teenager Shira Banki was stabbed by Yishai Schlissel while marching in Jerusalem’s annual Gay Pride Parade, succumbing to her wounds three days later.On Sunday, President Reuven Rivlin met with the Banki family and representatives of the Open House for Pride and Tolerance ahead of this year’s Gay Pride Parade in Jerusalem which is scheduled for this Thursday. Rivlin reiterated his staunch belief that no religious or political ideology can justify murder.“All incitement against the LGBT community must stop,” Rivlin insisted.Religious and political differences regarding sexual orientation are not an excuse for violence and incitement, he said. “This is not our way. This is not the way of Israeli society,” he continued. “Shira’s murder and the terrorist attack in Orlando indicate that a much greater effort must be made in educating towards tolerance, and the great battle is still ahead of us.”He had been pained by the harsh comments of disapproval of the LGBT community by rabbis and academics, he told his guests. It was particularly painful, he said, because those who are so ill disposed to LGBT people ignore the teaching that all human beings are created in the image of God.He was reasonably certain some of the rabbis who are so fiercely critical of LGBT people and whose words are gospel to their admiring students, are in fact gay themselves, and have not yet come out of the closet.Uri Banki thanked Rivlin for his strong and clear message which emphasizes the importance of tolerance and acceptance of the other.“This is something that is lacking in many places,” he said, adding how significant it is that the message comes from the president of the country.Rivlin responded that he and his wife Nechama, are simply representing Shira.He urged all those who feel that they should participate in this year’s parade to do so without fear.The Bankis also called on members of the public from all backgrounds to join in the march and to bring flowers to the spot where Shira was stabbed.