The ministry has notified the court that it is reviewing a "new evaluation" of the hot-button issue of gay adoption. 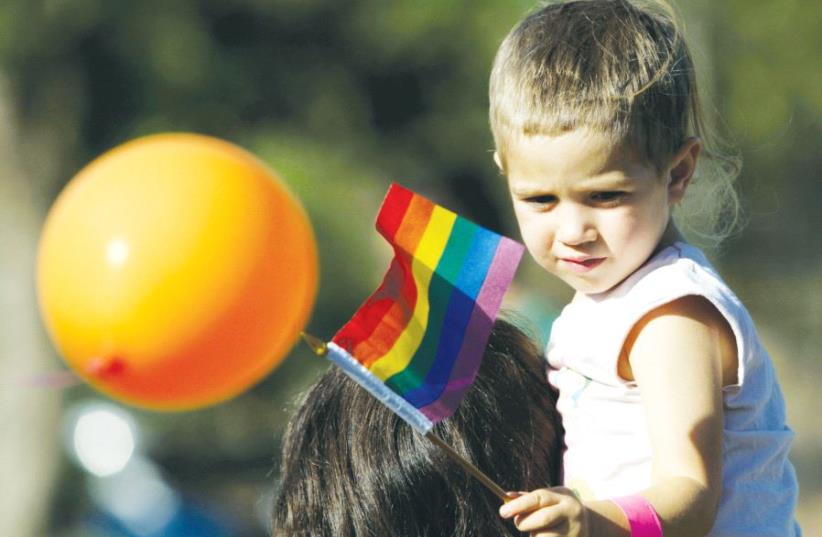 Participants during Jerusalem’s annual gay pride parade
(photo credit: REUTERS)
Advertisement
Labor and Social Services Minister Haim Katz on Tuesday notified the High Court of Justice that his ministry is “undertaking a new evaluation of the issue of adoption by gay couples,” signaling that it is moving in a pro-gay adoption direction.Katz made the notification two days after his ministry seemed to take an anti-gay adoption position to the High Court and one day after sending mixed signals, both of which led to a wave of political criticism.The social services minister also asked the High Court to postpone the anticipated Thursday hearing of a petition in favor of gay adoption to give him more time to review the issue.Following criticism of the anti-gay adoption position, he told the court that more time would allow “professional officials to further re-explore the issue and take into account all of the current relevant factors,” while emphasizing that the overall purpose remains to make adoption more efficient “for all Israeli citizens who want to adopt.”By the end of the day Monday, it was still unclear what the Social Services Ministry’s and Justice Ministry’s real positions were on the issue and why they seemed to be altering them by the hour.In a brief submitted Sunday, the Justice Ministry, on behalf of the government, said that it opposed the Israel Religious Action Center’s petition to permit gay couples to adopt, on two main grounds.The first was no secret. The government and the country are divided over the issue, with the Zionist Union, Meretz and Yesh Atid parties (all in the opposition) pro-adoption, the Shas, United Torah Judaism, Bayit Yehudi and Yisrael Beytenu parties anti, and the Likud, Kulanu and Joint List parties split internally, all but the last part of the government.Accordingly, the Justice Ministry said that the issue must be ironed out by the Knesset as part of a wide public debate over the broader issues of gay marriage and gay rights.But then the Justice Ministry added an unexpected reason to oppose. It represented to the court that the Social Services Ministry, which has primary responsibility for adoption issues, viewed adoption by a gay couple as imposing additional difficulties on the child and potentially hampering the success of the adoption.It is standard for the Justice Ministry to file and argue policy on behalf of the other ministries, once those ministries convey their positions to the attorney-general.However, after heavy criticism from the Zionist Union, Meretz and Yesh Atid parties and one Kulanu MK, the Social Services Ministry issued a bizarre clarification, which seemed to both backpedal and create more questions.The statement said, “Unfortunately, the language in the brief that was submitted to the High Court was failed language which would have been fitting if it had not been said.The minister has no intention to prevent or reject the ability of one group or another to adopt.”Asked on Monday by The Jerusalem Post to explain its backpedaling from its position presented to the High Court by the Justice Ministry and to clarify why this antigay adoption position was presented if the Social Services Ministry does not believe it, the ministry responded with a third ambiguous statement.Tuesday’s statement to the High Court seemed to indicate that the ministry has finally moved to a more pro-gay adoption position, though it is still unclear how that will be reflected to the justices when the Justice Ministry melds together the Social Services Ministry’s view with other government viewpoints.