Soldier at Hebron shooter trial: Terrorist may have exploded at any moment

Subsequently, the CEO of MDA, Eli Ben, also testified in Azaria’s defense, stating that the IDF had not checked Sharif carefully enough for the possibility of a bomb. 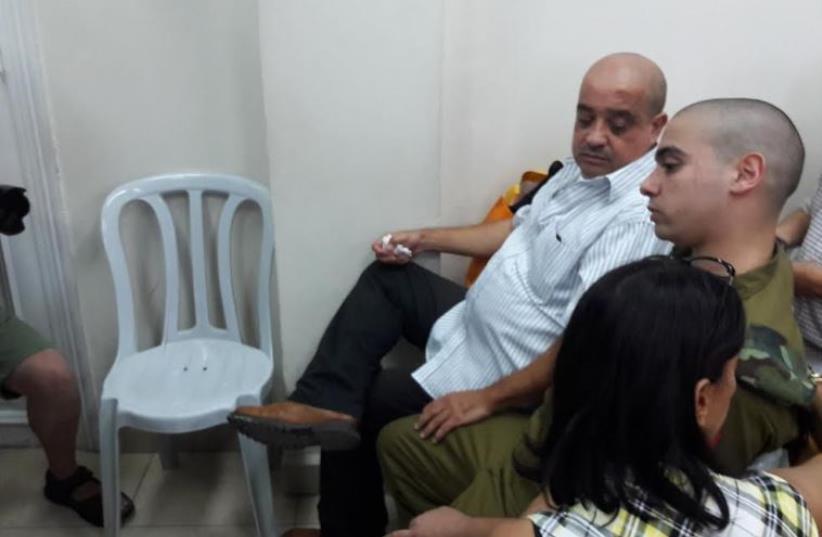 IDF Sgt. Elor Azaria in the Jaffa Military Court, July 25, 2016
(photo credit: YONAH JEREMY BOB)
Advertisement
The immobilized Palestinian terrorist whom Sgt. Elor Azaria shot in the head on March 24 “might have exploded at any moment,” the IDF soldier whom the attacker stabbed told the Jaffa Military Court at Azaria’s manslaughter trial on Sunday.The soldier, O., whose name is under gag order, supported Azaria’s narrative that Palestinian attacker Abdel Fatah al-Sharif remained a danger, potentially concealing an explosive vest, even after Sharif was severely wounded.Azaria is trying to prove that he shot Sharif in self-defense, thinking that he had a concealed explosive vest. Nearly all of the IDF commanders involved in the incident have said there was no operational justification for shooting Sharif and that Azaria wanted revenge for Sharif having stabbed O.It was also considered unlikely that if Sharif were indeed a suicide bomber, he would attack soldiers with a knife rather than blowing himself up.Azaria arrived on the scene about 10 minutes after the attack, first attending to O.’s wounds and then deciding on his own to shoot Sharif in the head as he lay nearly motionless on the ground.In defending Azaria’s narrative, O. mentioned two points where he was worried that Sharif was still dangerous after having been shot.The first time was after Sharif was shot but started to run away. The second point was after O. was being carried away on a stretcher when some of the Magen David Adom staff started yelling that Sharif might have a bomb.Despite the positive testimony for Azaria, including O. testifying that the Hebron shooter was of the strongest character, IDF lead prosecutor Lt.-Col. Nadav Weissman got him to admit that, once Sharif fell to the ground, he no longer viewed him as a threat again until the MDA calls about a possible bomb. This would mean that yet another soldier on the spot viewed Sharif as neutralized from the time he fell to the ground.Subsequently, MDA CEO Eli Ben also testified in Azaria’s defense, stating that the IDF had not checked Sharif carefully enough for the possibility of a bomb.Ben added that now there is no longer a need for a bomb squad to check an attacker’s body before the body is evacuated, but that on March 24 regulations still required a bomb squad check.Even now, Ben said that MDA insists on a more careful physical check of an attacker’s body than the IDF performed of Sharif.At the same time, Weissman embarrassed Ben with evidence that MDA rescue worker Ofer Ohana tampered with evidence in the case by moving Sharif’s knife closer to his body to make it look like Sharif was shot while reaching for the knife.Further, Weissman attacked Ben and the MDA’s credibility and neutrality in addressing the facts of the case with evidence that a number of employees have refused to treat wounded Palestinians due to anti-Palestinian ideology.