Herzog says deal comes too late, while Liberman calls it ‘dangerous’ for Israel. 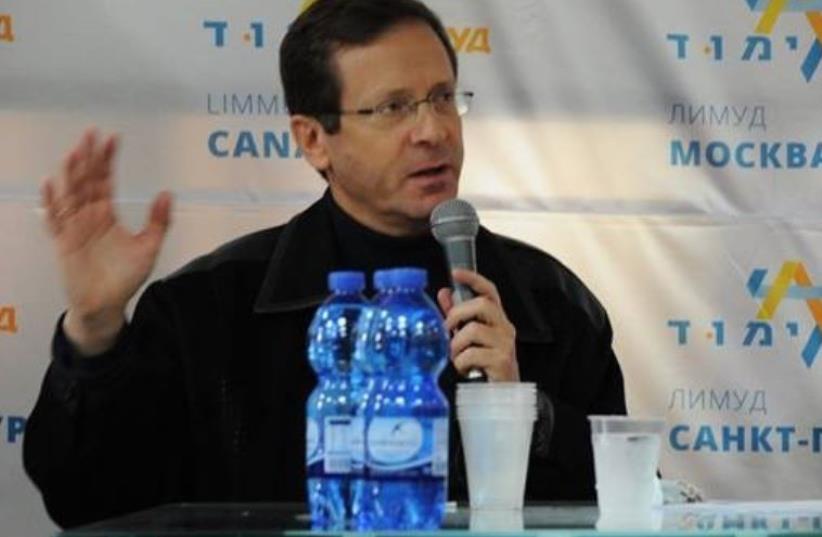 Opposition leader Isaac Herzog speaks at a Limmud FSU gathering at Kibbutz Ginosar, December 18, 2015
(photo credit: ANDREY DEVEIKIN)
Advertisement
Opposition leader Isaac Herzog on Friday welcomed the emerging reconciliation deal with Turkey as a step in the right direction, albeit late in coming, while former foreign minister Avigdor Liberman slammed the move as “dangerous” for Israel.“It’s good that we have reached an agreement with Turkey, but unfortunately this agreement has come too late, and we could have struck a better deal two or three years ago,” Herzog (Zionist Union) told a Limmud FSU gathering at Kibbutz Ginossar.Herzog blamed Prime Minister Benjamin Netanyahu for delaying the deal with Turkey, saying he had been afraid of the Yisrael Beytenu chairman when he served as foreign minister in the last government, “so he froze the negotiations over and over, and the price went up.”The Zionist Union leader acknowledged that the regime of Turkish President Recep Tayyip Erdogan was problematic for Israel, adding that under no circumstances should Erdogan be given “a foothold in Gaza.”“I think Turkey is an important country in the region,” Herzog said. “At the same time, there is a very bad feeling about Erdogan’s conduct toward us in the past years.Turkey must not have access to Gaza, and Erdogan should not be allowed to deal with Gaza.”Liberman voiced strong opposition to any reconciliation with Turkey, calling Erdogan “the leader of a radical Islamist regime.”“The deal with Turkey is not yet complete, but the damage has already been done,” he said at the Limmud FSU event. “Political opportunism is not a substitute for prudent and wise diplomacy.”Liberman pointed to Turkey as untrustworthy partner, arguing that the Turks had traded with Islamic State, invaded northern Iraq against international law, aided Hamas and now had diplomatic tensions with Russia over its recent downing of a Russian warplane on its border with Syria.He added that an agreement aimed at thawing relations between Israel and Turkey could negatively impact recent trilateral efforts to boost Israel’s ties with Greece and Cyprus, as well as ties with Egypt.“[The deal] will also hurt relations with Egypt because I can’t see Erdogan waiving demands regarding Gaza, and any Turkish foothold in Gaza will come at Egypt’s expense,” he warned.Transportation Minister Israel Katz (Likud) told the conference that the deal with Turkey was not “a black and white issue.”“We don’t need a policy of black and white in this region, but rather in every case, in this case Turkey, we must focus on what’s in the interest of the State of Israel,” Katz said. “I think we are preserving Israel’s security interests, and if there are things we have in common with Turkey, they must be expressed.”Regarding tensions between Turkey and Russia, Katz said, “With all due respect, we are not responsible for Russia’s external relations. Everyone navigates its policy according to its own interests, especially the current Russian president [Vladimir Putin]. When it’s necessary, we coordinate our policies with him.”He also noted that even today, many Turkish products were exported to Jordan via the port of Haifa, and that Turkey could help Israel export its natural gas to other countries.MK Michael Oren (Kulanu) said that the pending agreement with Turkey “is a good thing.”“I don’t think it’s too late,” Oren said. “It’s happening for all sorts of reasons. It’s happening because of the gas issue. Turkey has an interest in our pipeline.”Oren said that as ambassador to the US, he had been involved in negotiations with Turkey to reach an agreement for an Israeli apology during US President Barack Obama’s visit to Israel in March, 2013 over the Mavi Marmara raid in which Israeli commandos killed nine Turks in May 2010.“The reason that apology took place was that in every single meeting we had with the president of the United States, Obama, he made it clear that his first priority was the reconciliation between Israel and Turkey,” Oren said.“He viewed the Israeli-Turkish- American triangle as a-close-to-paramount American strategic interest.”Netanyahu had paid a political price for the apology, Oren said, noting that Liberman had, earlier in the day, attacked the prime minister for his attempts to reconcile with Turkey.Since May 2010, despite the fallout from the Mavi Marmara incident, Israel’s trade with Turkey has multiplied fourfold, Oren said.“Turkey is a major trading partner for the State of Israel, and it can be a much better trading partner for the State of Israel, so I think it’s a very good thing that’s happening,” he said.The politicians all spoke at the Limmud Kinneret Festival gathering on Friday. Limmud FSU marked its 10th anniversary with a festive weekend, attended by some 1,300 Russian- speaking Israelis, at Kibbutz Ginossar.