Official: Netanyahu would like to convene a summit in West Africa soon. 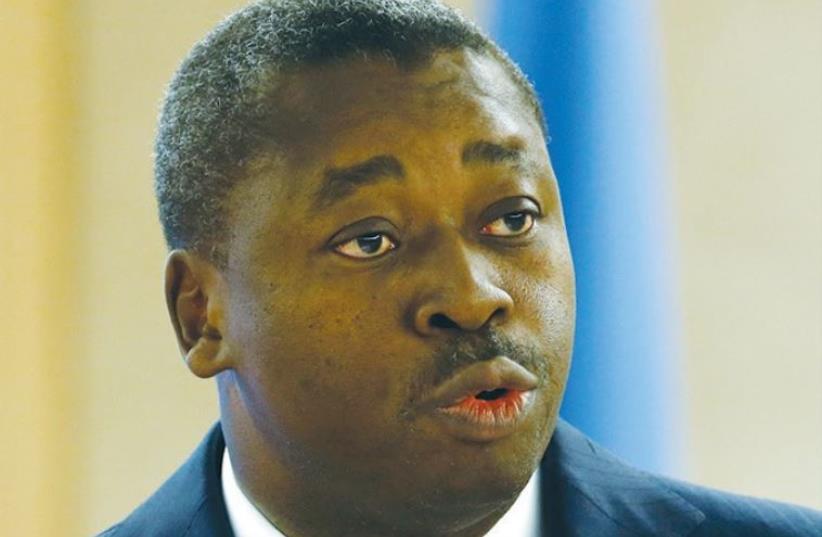 FAURE GNASSINGBE
(photo credit: REUTERS)
Advertisement
Togo President Faure Gnassingbe is expected to arrive for a visit in early August, The Jerusalem Post has learned, with Jerusalem keen on keeping alive the momentum of Prime Minister Benjamin Netanyahu’s recent visit to Africa.Togo is one of Israel’s strongest friends in western Africa, as evidenced last September when it joined Rwanda, Kenya and Burundi as the other African states in supporting Israel at a key vote at the International Atomic Energy Agency.Gnassingbe was last here in 2012.Togo has already given the visit its okay, with a final confirmation expected soon from Jerusalem.A senior diplomatic official said Netanyahu would like to convene a summit in West Africa in the near future, similar to the one he held last week in east Africa with leaders from Uganda, Kenya, Rwanda, Ethiopia Tanzania, South Sudan and Zambia Among the natural candidates to attend such a summit would be Togo, Benin, Cote d’Ivoire, Ghana, Gabon and Cameroon.Nigeria, whose relations with Israel have soured to a certain degree since the ouster of former president Goodluck Jonathan last year, is – according to officials – placing obstacles in the way of arranging such a summit.Netanyahu briefed the cabinet Sunday on his four-day, four-country trip last week to Africa, highlighting the summit with the seven east African countries, which together have some 260 million people.These leaders, he said declared a willingness to strengthen Israel’s links with other African countries, and to work to get Israel reinstated as an observer country at the African Union.“Even though this is a process that will take time, there is no doubt that this is the start of a long journey toward dealing with the automatic majority against Israel in international forums, an automatic majority that rests, first and foremost, on a bloc of African countries.” Netanyahu said.“This will not be achieved immediately. It will take a lot of time, but we have begun the process.”Netanyahu said that both during, and in the two days since his Africa trip, Israel received call from various countries in Africa – “some of which we do not have relations with” – who are interested in enhancing ties.Israel does not have relations with nine Sub-Saharan African states: Mali, Chad, Niger, Guinea, Sudan, Somalia, Mauritania, Djibouti and Comoros.According to the prime minister, these countries “see Israel and its technological capabilities as a major force, first of all, that could assist them in the war against radical Islam that is inundating all of Africa. They want to be close to us; they want our help.”In addition, he said, they view Israel’s technological and entrepreneurial abilities as something that can help in the development of their countries in a variety of different spheres.