Turkey deal ‘cornerstone’ of stability in the region

Foreign Ministry director-general says the Mideast is in chaos • Security cabinet approves accord, 7-3 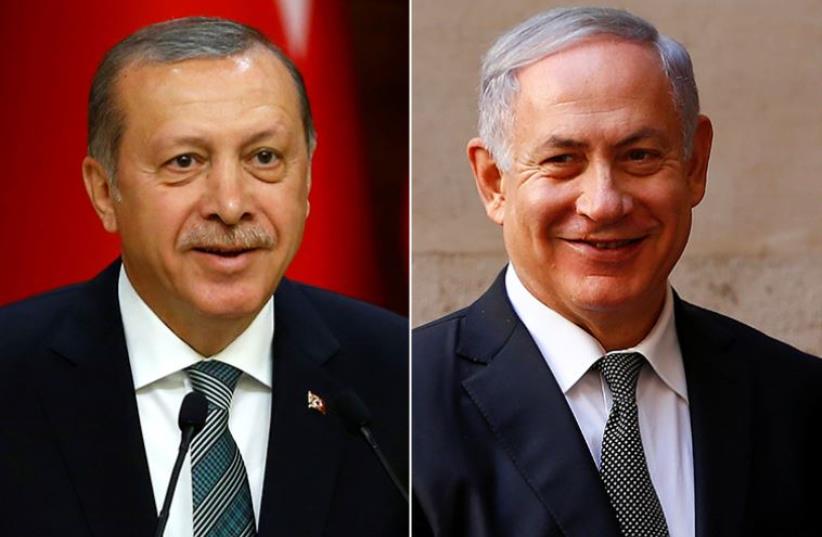 Netanyahu and Erdogan
(photo credit: REUTERS)
Advertisement
The Israeli-Turkish agreement approved by the security cabinet on Wednesday creates the “cornerstone for regional stability in the future,” Foreign Ministry director-general Dore Gold told The Jerusalem Post shortly after the deal was ratified.The deal, he said, “is built on certain norms, such as being firmly against international terrorism.”Those norms, he added, “have been very much up in the air in the Middle East for the last couple of decades, which partly explains the deterioration in the situation.”The need for Israel and Turkey to cooperate in the fight against terrorism, a need highlighted by Tuesday’s deadly attack in Istanbul, is believed to have been one reason the accord passed the security cabinet with relative ease, with seven voting in favor, and three against.The three ministers opposed were both Bayit Yehudi ministers – Education Minister Naftali Bennett and Justice Minister Ayelet Shaked – and Defense Minister Avigdor Liberman of Yisrael Beytenu.All four Likud ministers fell in line behind Prime Minister Benjamin Netanyahu, as did the Kulanu ministers: Finance Minister Moshe Kahlon and Construction Minister Yoav Gallant.“Right now we are in chaos in the Middle East, and what we have to do is begin to put together a concept of how to stabilize this region,” Gold said.Asked how Turkish President Recep Tayyip Erdogan’s open support for Hamas dovetails with a mutual interest in fighting terrorism, Gold replied, “We come from different worldviews.”Noting that the current Turkish leadership has a special relationship with the Muslim Brotherhood going back to 2006, Gold said, “I think the attitudes toward various Islamist movements are evolving and changing, and in the meantime they are being targeted repeatedly by Islamic State.”It is clear to most, Gold said, that “Israel’s agreement with Turkey is not a honeymoon. We do not have some kind of ideological compatibility. They still have their worldview, and we still have our worldview. But what we have is a convergence of strategic interests.”Gold signed the agreement that his Turkish counterpart, Feridun Sinirlioglu, signed the day before in Ankara, and Sinirlioglu did the same in Turkey with the document signed by Gold. The deal must now be ratified by the Turkish parliament, which is considered a foregone conclusion even though it was attacked on Wednesday in parliament by the heads of three opposition parties.The security cabinet ministers met on the deal for some 4.5 hours. Among those who joined the meeting were Mossad director Yossi Cohen and the prime minister’s envoy Joseph Ciechanover, who were both involved in the negotiations, and Attorney- General Avichai Mandelblit.Reflecting discomfort with the fact that the agreement was signed even though Israel did not win the release of the two Israelis missing in the Gaza Strip, nor of the two soldiers whose bodies are being held by Hamas, it was decided that another security cabinet discussion will be held soon to discuss the conditions of Hamas prisoners in Israeli jails.The cabinet also decided that a smaller ministerial committee will be established to deal with the issue of Israeli captives and MIAs, looking for ways to create leverage on Hamas. The cabinet decided to hold a discussion soon on the recommendations of Shamgar Commission on policy regarding events involving captives and MIAs.Public Security Minister Gilad Erdan (Likud) pushed for these discussions. Following the meeting Erdan, who beforehand was considered one of the ministers sitting on the fence, said, “My heart goes out to the families.”“After a lot of thought, I decided to vote in favor of reconciliation with Turkey,” Erdan said. He said that he had become convinced that there was not a scenario in which Turkey would be able to influence Hamas to return the bodies of Lt. Hadar Goldin and St.-Sgt. Oron Shaul, who were killed in the Gaza Strip during 2014’s Operation Protective Edge.The minister said that the agreement had important security and economic benefits. It also takes into account the importance of the blockade of Gaza and includes a Turkish obligation to send supplies to the Strip only through transports that are under Israeli control.“When it will not be quiet, there will not be anything delivered to Gaza,” he said.While acknowledging that paying money to the families of terrorists who had attacked IDF soldiers was infuriating, he said no reconciliation deal would be perfect. “Nothing justifies paying terrorists that attack our soldiers, but the agreement will give Israel economic benefits,” Erdan said.Gallant issued a statement saying that the deal was “vital” to Israel’s security and regional stability.“There are compromises in every agreement,” he said. “But our responsibility in the security cabinet is to identify what is strategically important for the long term.”Turkey, he said, is one of the four central Muslim states in the region, and it is “important to keep it as close to us as is possible. The true enemies of Israel are Iran and the terrorist organizations, and we should concentrate our struggle against them while at the same time forming alliances and developing ties with all the other elements.”Kulanu MK Michael Oren, who took part in negotiations with the Turks in 2013, praised the security cabinet for approving the deal.“The two stumbling blocks when we negotiated were the Turkish refusal to drop charges against anyone involved in the raid, and the Turkish insistence on keeping the Gaza blockade, and the Turks received neither,” Oren said. “The Turks have also been blocking Israeli cooperation with NATO, and we will have a lot of gain from that resuming. It is also nice every once in a while for Israel to say yes.”