Yisrael Hayom, V15 get a pass from Comptroller, but Shapira suggests new media law on bias

Some calls have even been made to declare media outlets activities and funding to be illegal campaign contributions under the guise of being media publications. 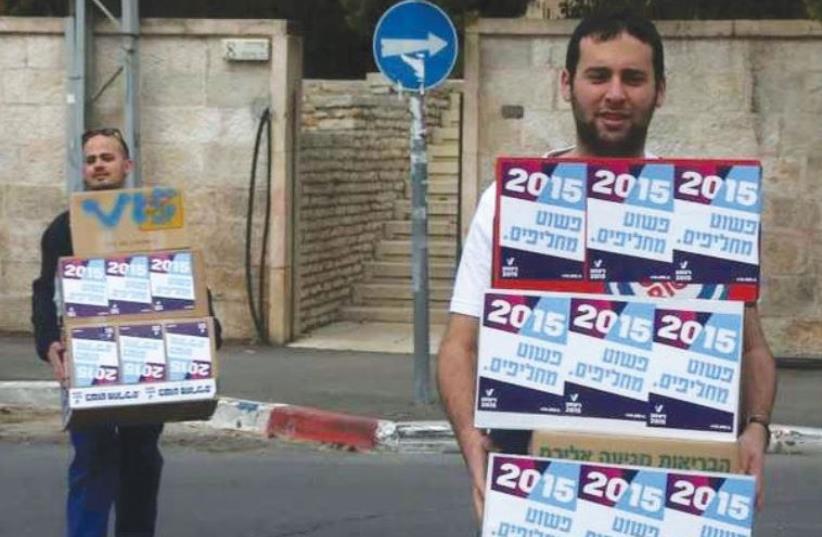 V15 ACTIVISTS on the streets in the 2015 elections.
(photo credit: MARC ISRAEL SELLEM)
Advertisement
State Comptroller Joseph Shapira on Tuesday decided that neither the newspaper Israel Hayom nor the entity V15 were linked to particular parties, as part of his analysis of election campaign financing.Israel Hayom has been accused of being a pro-Likud propaganda outlet for Prime Minister Benjamin Netanyahu, while V15, short for victory in the 2015 election, has been allegedly associated with the Israeli Left and the Zionist Union’s attempt to unseat the prime minister in that election.Regarding V15, Shapira said that despite the allegations, “there were no positive findings of an organizational connection between the V15 entity and any specific political party.”In light of that finding, the fact that it sponsored messages about “changing the ruling party” or “voting for various blocks” was not sufficient “to justify the determination that a particular party received a [campaign finance] contribution, let alone a forbidden contribution, from an entity external top those parties,” he said.A bill by MK Yoav Kisch (Likud) is currently under consideration which would limit the funding that entities like V15 could direct at impacting a specific sector to vote for specific parties, but it has run into opposition by multiple parties concerned that it could impact their voting drives, not just V15.The bill took on greater momentum after a US Senate panel criticized the US State Department for giving a $350,000 grant to OneVoice, an affiliate of which became V15.Players across the system played pick and choose regarding which part of the comptroller’s report to highlight in order to back up their positions on the issue.Senior Likud sources said that the claim of the comptroller, that V15 acted against Netanyahu and in favor of a bloc of political parties, proved the need for the Likud’s proposed amendment to plug the hole in the current law in order to limit such activities in the clearest possible way.Kisch said that without his bill, Israeli elections would deteriorate into American- style elections, where private fund-raising can dominate the landscape of voters’ choices.MK Yoel Hasson (Zionist Union) said that his party has been saying “all along… that there was no connection between the V15 campaign and our campaign to unseat Netanyahu… but the Likud prefers to lie and incite.”He said that all of the Likud’s V15-related efforts were directed at silencing opposition to the prime minister.Israel Democracy Institute president Yohanan Plesner said, “The state comptroller today clarified the situation by establishing an Israeli model for activities of NGOs/NPOs [nonpartisan organizations] interested in influencing an election campaign. This model approves a de facto arrangement, similar to that of the United States’ Super PA Cs.”Plesner said it is necessary to introduce an appropriate set of regulations that will maintain a balance between the rights of freedom of expression and political association on the one hand, and equality and the prevention of extensive influence by outside special interest groups on the other.“Attempts by other democratic systems have taught us that, at least at first, we should be satisfied with full reporting and transparency by these NGOs/NPOs, and we should abstain from imposing other limitations on them at this stage.”Israel Hayom has taken the most heat due to the close relations between Netanyahu and the paper’s owner, Sheldon Adelson. Other media outlets have also been accused of various biases.Shapira said he has been asked to declare certain media outlets’ activities and funding to be part of specific political parties’ campaign financing, because of their perceived bias to assist a specific party. He explained that the “issue raises the most complex and fundamental questions with respect to freedom of speech, freedom of the press and political propaganda.“A determination that a particular news outlet… focuses on assisting a specific party requires a review of the entire media apparatus… and demands investigatory tools and research, some of which are not available to the state comptroller and the authority granted to him by law,” Shapira wrote.He expressed serious concern at the precedent that would be set in terms of maintaining Israeli democracy and a free press if the comptroller got into the business of classifying which media outlets were objective and which were biased or associated with a specific group.Rather, he suggested that the Knesset address the issue to balance the various competing priorities. A bill proposed in the last Knesset was blocked by Netanyahu’s opposition.