Defense Minister Avigdor Liberman sent a letter to the president two weeks ago asking him to pardon Elor Azaria. 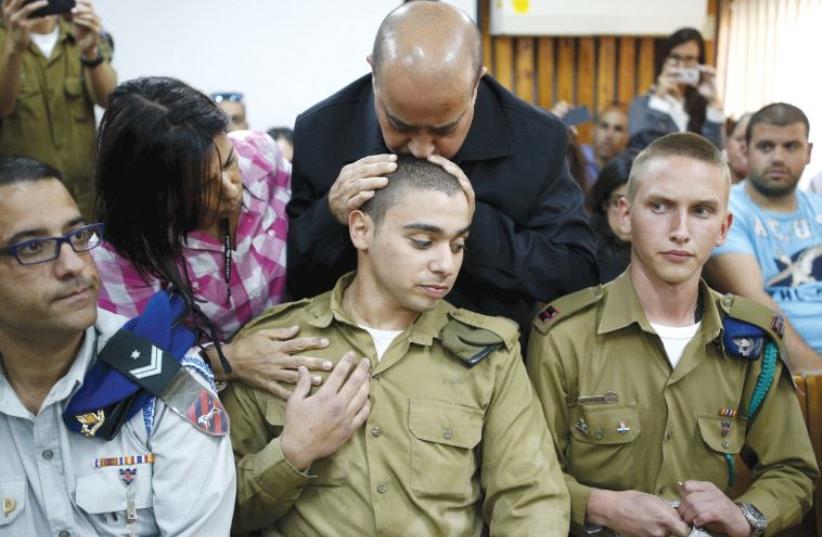 THE FATHER OF IDF soldier Elor Azaria kisses his head during a remand hearing last March
(photo credit: REUTERS)
Advertisement
President Reuven Rivlin on Sunday rejected “Hebron Shooter” Elor Azaria’s request to commute his 14-month jail sentence for manslaughter.The decision left Rivlin standing with the legal community but up against Prime Minister Benjamin Netanyahu and much of the political class who had called for a pardon.Azaria entered jail on August 9 after being convicted of manslaughter for shooting Palestinian attacker Abdel Fatah al-Sharif on March 24, 2016.Videos of the incident, which went viral and brought widespread international condemnation, show Azaria shooting the incapacitated terrorist while he was lying on the ground – although Azaria claimed his shots were in self-defense, and he feared a possible knife attack or concealed explosive vest.“The president has reviewed the offenses committed by you and their circumstances, the content of your written application, and all the material and opinions brought before him, and has decided to reject the application,” said a letter from Rivlin’s legal adviser.
IDF soldier shoots dead subdued Palestinian terrorist in Hebron, part of Elor Azaria case
“The president learned that in passing sentence, the military court took into account the circumstances you raised... in this pardon request for considerations of leniency, and noted it took them into account in passing a lighter sentence,” the letter continued, “In addition, in September 2017, the chief of staff saw fit to further ease your sentence and reduce the punishment by four months from the prison sentence... for reasons of compassion and while taking into consideration your military service as a soldier.”Ultimately, the letter said, Rivlin thought “an additional lightening of your sentence would harm the resilience of the IDF and the State of Israel. The IDF’s values, including the Purity of Arms, are the core foundation of the strength of the IDF,” and have helped Israel “in the just struggle for our right to a safe, national home, and in building a robust society.”The letter added, “In his decision, the president took into account the fact that you are expected to face a committee in approximately three months, to consider your release.”Defense Minister Avigdor Liberman said that although he respects the president, he found his decision to deny the pardon unfortunate.“Beyond the personal price that the solider and his family paid, there is a public interest and need to heal the rift inside Israeli society. There is a greater impact to be considered on those already serving and young people who have yet to be drafted.”Culture Minister Miri Regev said the president had harmed the institution of pardoning and abandoned Azaria. Rivlin, she said, had an opportunity to utilize the purpose of the pardon but, unfortunately, gave into political pressure. Regev claimed the president sent a clear message to soldiers that if they make a mistake they will be abandoned.Communications Minister Ayoub Kara said the Azaria family had already suffered enough, paying a price to their health, and that this should be a time for mercy.In contrast, Labor MK Omer Bar Lev said, “There is still hope for Israel as long as it has such a president.The real way to heal rifts in Israeli society is to support the decisions of the IDF chief of staff, who symbolizes the national consensus and not the negative spirit against it.”Jerusalem Post Staff and Greer Fay Cashman contributed to this story.