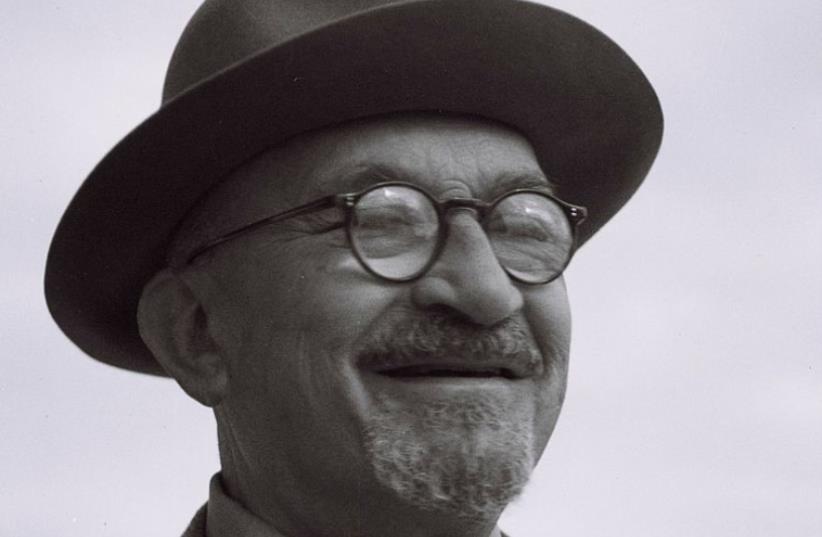 Israel's first president Chaim Weizmann
(photo credit: MENDELSON HUGO)
Advertisement
In Jewish tradition, the first day of the Hebrew calendar month of Nisan marks the first of Judaism’s four new year’s days, and is known as the New Year of Kings. As the modern State of Israel does not have a king, the date was chosen to honor the country’s deceased presidents and prime ministers. Each year the sitting president and prime minister each award a prize for research into the history and heritage of departed leaders.This year, the President’s Prize was awarded for research into the life of the state’s first president, Chaim Weizmann; and the Prime Minister’s Prize was given for research into the life of Ariel Sharon, the nation’s 11th prime minister.The President’s Prize was awarded to the young historians project of the Amos de Shalit High School in Rehovot, where Weizmann lived; and to Eden Ramon, a student at the city’s Eshel Hanasi High School, named in memory of Weizmann, for hosting a radio program which presented the story of his life. The young historians spent sifting through the archives in the Weizmann House on the campus of the Weizmann Institute of Science, also in Rehovot.The Prime Minister’s Prize was awarded to Dr. Efrat Zakbach, whose doctoral thesis at Bar-Ilan University examined Sharon, and the influences and interaction between political and military strategies.President Reuven Rivlin said that he could not allow the occasion to pass without mention of the fifth president, Yitzhak Navon, a native son of Jerusalem, who Rivlin said was “a dear man beloved by all sectors of the population.”Rivlin also gave a passing mention to Sharon, who he had eulogized recently at the latter’s graveside on the second anniversary of his death.Although Weizmann was known as a great scientist, Rivlin also credited him with being a great diplomat and Zionist visionary without whose powers of persuasion, the Balfour Declaration might never have come about.The Balfour Declaration, which paved the way for a sovereign state for the Jewish people, was subsequently quoted at the San Remo Conference in April 1920 and again by the League of Nations that approved the creation of a National Home for the Jewish people, said Rivlin, who emphasized his oft repeated argument that this was proof that the State of Israel was established not as compensation for the Holocaust or other evils perpetrated against the Jews, but rather in recognition of the historic right of the Jewish people to their own sovereign state in the Land of Israel.Prime Minister Benjamin Netanyahu thanked Rivlin for mentioning San Remo, so that historic fact could be put into the correct perspective.“There are people who think that without the Holocaust there would be no State of Israel,” he said, “but I say had there been a State of Israel [in 1938] there would have been no Holocaust.”Netanyahu remarked on a striking parallel in the lives of Weizmann and Sharon.Weizmann’s son, Flight.-Lt.Michael Weizmann, was an RAF pilot whose plane was shot down over the Bay of Biscay in 1942. His body was never recovered. Sharon’s first wife, Margalit, was killed in an automobile accident in 1962, and their young son, Gur, died in October 1967 while playing with his father’s loaded gun.Netanyahu felt that both men buried their grief in a sense of mission for the Jewish people, the Zionist cause and the State of Israel.He reviewed Sharon’s remarkable career as a soldier whose beliefs that a leader goes ahead of his troops, and that wounded and dead soldiers should not be left in the field, have become intrinsic to IDF values. These particular values were already entrenched when Netanyahu began his army service shortly after the Six Day War.Netanyahu also credited Sharon with having played a significant role in the peace between Israel and Egypt.Turning to Sharon’s political career, Netanyahu said, “Arik was in my first government, and I was a minister in his, and we cooperated on many economic reforms.”He paid tribute to Sharon’s policy for subduing terrorism, and said that Sharon’s strategy and tactics were still relevant today.Netanyahu acknowledged that he and Sharon had strong differences of opinion, especially over the 1995 unilateral disengagement from the Gaza Strip, “but the issues on which we disagreed in no way measured up to those on which we did agree.”Netanyahu concluded by saying that Weizmann and Sharon were two important links in the chain of Israeli leadership.