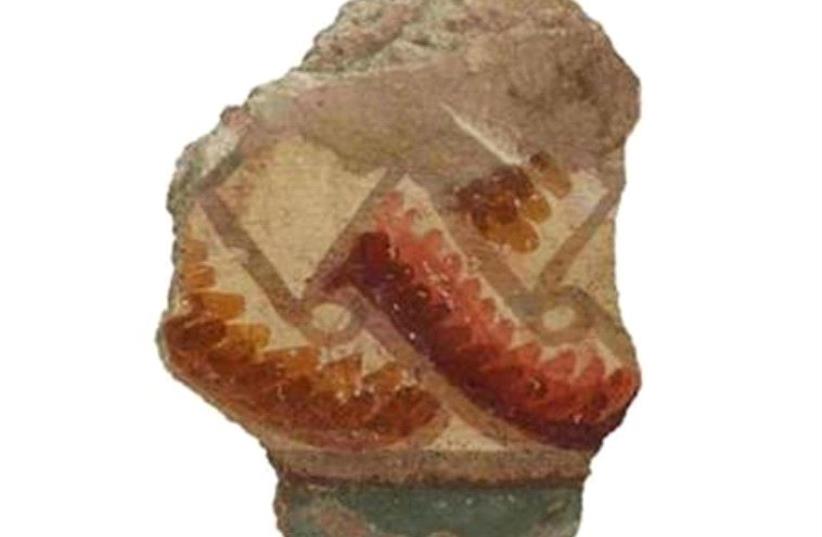 Guilloche, in a fresco from Zippori, dating from the early Second Century CE
(photo credit: G. LARON)
Advertisement
A team of archeologists sponsored by the Hebrew University of Jerusalem uncovered hundreds of fresco fragments in Tzipori National Park that date back to the second century CE, shortly after the Roman destruction of the Second Temple.The fragments include the head of a lion, a horned animal, a bird and a tiger’s hindquarters – all of which were discovered in what was a monumental building located at the end of an ancient road in Tzipori. At least one fragment contains a depiction of a man bearing a club.Traditionally, images depicting animals or people were not common within Second Temple period religious custom.Archeologists are still unsure of the monumental building’s original purpose, but the significance of the frescoes found in it lies in how early they are dated, and the highly Jewish population that would have approved of them existing in a community- centered location.“It’s actually the first time that we know that they painted those figurative images.It’s kind of a revolution for them,” says Zeev Weiss, professor of archeology and Tzipori archeological team director for the Hebrew University. “Though we don’t know who constructed this building, whether Jews or not, still, it was a Jewish population that enjoyed it and that somehow indicated that their surroundings had changed.”These finds raise questions relating to the sociohistorical background of second- century Tzipori residents. Who initiated the construction of the monumental building that once housed the frescoes that were discovered? The questions of who approved the patterns and images that adorned the walls and what their intention was are also being explored by the archeologists there, with no definitive answers found yet. The finds uncovered throughout the site indicate that Tzipori, the Jewish capital of the Galilee, was home to many Jewish inhabitants throughout the Roman period, but the city also had a significant pagan community for which a temple was built, opposite the monumental building, parts of which were also discovered this summer.“After the destruction of Jerusalem, most people in the region did not use figurative images. That includes Tzipori, which is a Jewish city,” says Weiss.“We’ve been digging there for 35 years, and I have to say that most of the finds did not include figurative images. But in the second century, we know that there was more openness to the Roman world.”The new finds in Tzipori contribute significantly to the research of Roman art in Israel. To date, excavators have uncovered the walls of several public and private buildings from Roman Tzipori that were decorated with colorful frescoes in geometric and floral patterns.This team’s finds are the first, only and earliest evidence of figurative images in wall paintings at the site, according to Hebrew University archeologists.Parallels to these finds are virtually unknown at other Israeli sites of the same period. Some panels bearing depictions of figures were discovered a few years ago in Herod’s palace at Herodion, and according to historian Josephus, the walls of the palace of Herod Antipas in Tiberias were also decorated with wall paintings depicting animals. Beyond that, no murals with depictions of figures dating to the first century and the beginning of the second century CE have been discovered to date in the region.