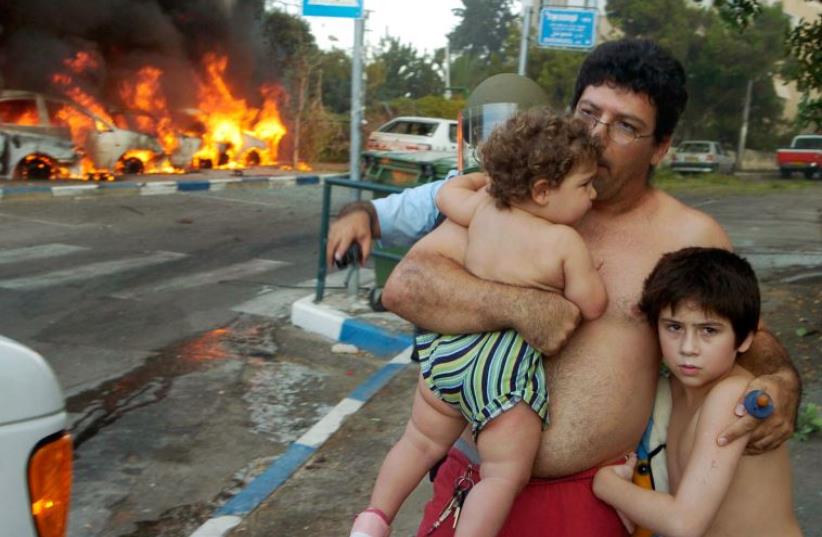 An Israeli man stands with his children at the scene of a rocket attack in Haifa, August 13, 2006
(photo credit: REUTERS)
Advertisement
Gaza border residents lack the resources to cope with the post-traumatic stress they are experiencing, including 4,000 affected children, according to a report issued by State Comptroller Joseph Shapira on Wednesday.The report covers problems at the municipal government level, including issues ranging from defects in municipal building processes to issues with transportation safety around schools to the failure of the Jerusalem Municipality to maintain competitive bidding when it issues contracts.Regarding treatment of traumatized Gaza border residents, the report noted that post-trauma treatment centers in communities such as Sderot and the Ashkelon region lack sufficient personnel to treat the immense number of affected residents since the 2014 Gaza war.And many of the personnel at these treatment centers were insufficiently trained for their roles, Shapira said, relating to the period of November 2014-March 2015.Further, the 11 treatment centers discussed by the report are not properly shielded from rocket attacks, meaning that when they were needed most and on an emergency basis during the war, they were not usable, because they were unsafe.In June 2014, the Health Ministry notified the treatment centers essentially that, going forward, they would be mostly on their own, with less involvement from the ministry, said the report.While Shapira explained that the ministry may have had a positive goal of empowering local officials with greater freedom and flexibility, the decision was taken too suddenly and left the treatment centers insufficient time to organize themselves along the new lines of responsibility.For example, without the ministry’s guidance, the treatment centers failed to keep a comprehensive running count and sufficient ongoing documentation of how many trauma cases it was handling.The absence of documentation meant the ministry was unable to perform any effective oversight or to comprehend and analyze the overall situation.Despite the criticism, Shapira did compliment the Education Ministry on its handling of cases of post-trauma children after the 2014 Gaza war had ended and complimented general overall government efforts over the last decade to better attend to post-trauma problems.Regarding building processes in the Haifa region, also referred to as “Shomron,” but not actually part of the West Bank region of Samaria, Shapira said that local authorities are poorly supervising building and have allowed a wide range of illegal building, including by the former head of the Jisr e-Zarka council, Ezzaldin Muhammad Amash.The report called the defects “grave even to the extent of harming public faith” in the councils.During the 2012-2014 period covered by the report, the local council did not collect the required fees for building, profits that should have been repaid to the council or fines for illegal building.Further, the council authorized new water and electricity connections without following proper procedures and did not update the general plans for building in the area, including a failure to update computer records.Next, the report found that several municipalities continue to over employ and overpay outside consultants to the tune of millions of shekels.These processes are not transparent, ignore procedural safeguards and have led to improperly large payments to consultants dealing with grass care, kitchen construction and a Ping-Pong sports elective.Shapira also found deficiencies in transportation and safety of the roadways relating to educational institutions.The report said that municipalities improperly hired transportation companies and contractors for building safety structures around schools, violating conflicts of interest principles by hiring people they knew who were not necessarily qualified.Further, Shapira said that he “viewed very gravely” the situation where many of the safety structures around schools were defective, putting children attending those schools in danger.Finally, the report covers a range of specific problems in specific cities, such as the absence of a proper bidding process for issuing contracts in Jerusalem, the improper renting of city units in Bat Yam and the failure to properly register businesses in the Hermon region.