According to the recommendations, the general school curriculum as well as textbooks should be updated to include chapters on the culture of Mizrahi Jews. 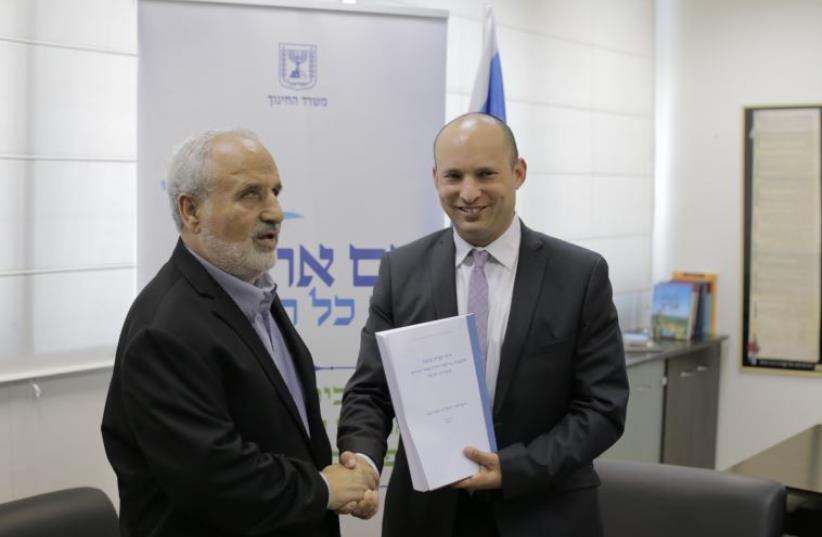 Erez Biton presents the recommendations of the Biton Committee to Education Minister Naftali Bennett in Tel Aviv on Thursday
(photo credit: DANIEL BROWN)
Advertisement
“After 68 years, we’re righting a historic injustice,” Education Minister Naftali Bennett said on Thursday.Speaking at a press conference in the Education Ministry offices in Tel Aviv, Bennett was presented with the recommendations of the Biton Committee, tasked with empowering Eastern Jewish cultural studies within the general education curriculum.Bennett launched the committee some four months ago, and appointed as its head, Erez Biton, the first poet of Mizrahi descent to win the Israel Prize in Literature (2015).Biton was tasked with empowering the identity of the Mizrahi Jewish community – including immigrants from Egypt, Iraq, Iran, Tunisia and Libya – within the education system.“The students of Israel will learn the entire Zionist and Jewish story, including the rich heritage of Mizrahi Jews,” Bennett said upon accepting the report.“I’m deeply moved by the addition of amazing stories, long left out of our education system, into our classrooms. I will make sure every girl and boy studies their heritage, their family’s history, and be proud of it.”Bennett said that he was raised in an Ashkenazi home, and was never exposed to the culture of Mizrahi Jews or their contributions to the state.“I want and ask that my children be raised on a complete Israel story, that they be educated in the spirit of the entire Jewish story,” he said. “We will tell the story of the entire Jewish nation, of all its communities, of all those who helped us arrive at the wonderful country we have today.”The committee, comprised of numerous subcommittee, among them literature, history, thought, academia and research, and enrichment, presented their recommendations in all fields on how to incorporate Eastern Jewish culture into the education system.According to the recommendations, first and foremost, the general school curriculum as well as textbooks used in classes should be updated to include chapters on the culture of Mizrahi Jews and on their works and contributions.The committee also called to establish a National Day for Jewish Refugees from Arab and Islamic States to be marked annually in schools on November 30. This would include visits to museums and other enrichment activities.The recommendations also included the organization of annual school trips for youth to Balkan states, Spain and Morocco as part of a heritage tour to learn about Sephardi roots in those countries.Additionally, the committee recommended launching a television show on the Educational Television Network about the many contributions of Eastern Jewry to Zionism and to the development of the State of Israel.With regards to higher education, the committee called for equal representation of Mizrahim and Ashkenazim on the Council for Higher Education.It urged that Mizrahi representatives be included in the social sciences in order to empower Mizrahi Jewish identity.In addition, the committee recommended establishing a new faculty in the social sciences for the study of Eastern Jewry in order to promote research in the field.The committee also made recommendations outside the purview of the education system, calling to establish museums for all the different communities of Mizrahi descent, such as, for example, establishing a Libyan Jewish heritage museum.The recommendations also called for the commemoration of significant figures in Eastern Jewish culture by naming schools and streets after them.Additionally, the committee called to strengthen ties with Diaspora organizations to explain and raise awareness of the situation and history of Jewish refugees from Arab countries.Over the next few months the ministry is set to learn the recommendations, and put together a plan to implement them.“I’m excited to open for our students a window toward beauty they haven’t yet met,” Biton told Bennett.“The committee for the empowerment of Mizrahi Jews in the educational curriculum took me on an unexpected adventure, meeting 17 communities whose voices are silenced in the Israeli experience; communities begging to be given a place and identity in the education system,” he said.Biton said the report and recommendations are a “statement of legitimacy to a valid Mizrahi identity, without taking anything away from the current Israeli identity.”He added that Bennett had given a “historic meaning by establishing the committee” and said the opportunity, the first of its kind, is “exceptional.”Biton, who has been blind since childhood, was born in Algeria. His well-known works include 1976’s Mincha Marokait (Moroccan Gift), 1979’s Sefer Hanana (Book of Mint) and 1989’s Tzipor Ben Yabashot (Bird Between Continents).Additional members of the committee included Oshra Alfasi, PhD; Yigal Ben Shalev, PhD; Dina Drori; Shlomo Ventura; Yehuda Miran, PhD; Prof.Aharon Maman; Prof. Moshe Amar; Prof. Chaim Saadon; and Tamar Eilam Gindi, PhD.