"Israel is poor in natural resources, but rich in human resources." 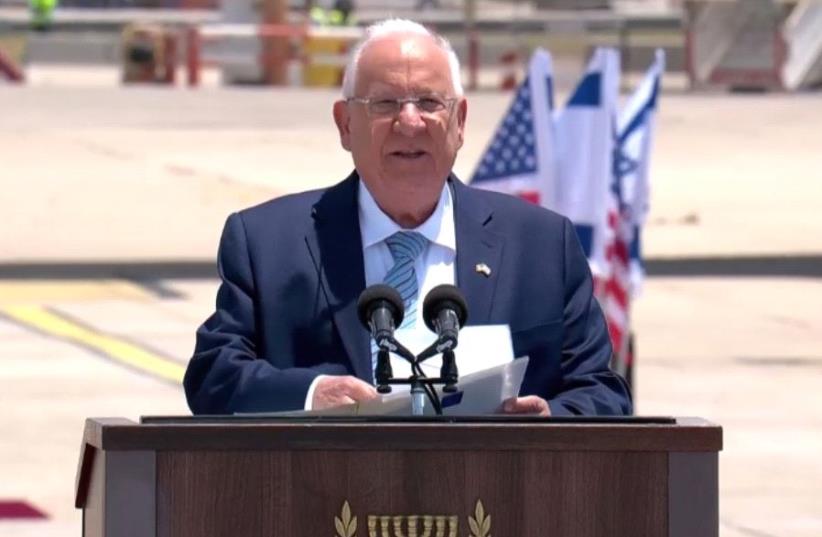 President Rivlin speaks at Ben Gurion Airport after the arrival of US President Donald Trump
(photo credit: screenshot)
Advertisement
Deeply perturbed by the Teva crisis, President Reuven Rivlin said on Monday that major local companies should remain in Israeli hands.Rivlin spoke at the Foreign Trade and Outstanding Exporter award ceremony at the Presidential Residence, which was revived by Economy and Industry Minister Eli Cohen after a three-year hiatus.“Israeli industry is a strategic national asset,” said Rivlin, “And much thought must be invested into how to safeguard it and develop it even more.”Looking out at some of Israel’s leading industrialists, Rivlin said that success has many fathers, but in this case, it was not surprising because they were all Israelis.The president said that he could not put into words the intensity of his sense of pride when he is witness to the impact of Israeli creativity, innovation, entrepreneurship and joint ventures, while on state visits abroad.Israel is poor in natural resources, he said, but rich in human resources.“Without you,” he told the industrialists assembled in front of him, “It’s doubtful that Israel would be where it is today. All of you have a share in Israel’s industrial revolution.”Wherever one goes in the world and sees groundbreaking developments in technology, cyber, medicine and agriculture, chances are high that they originated in Israel, said Rivlin.“We export Israeli know-how to the world,” he said. “What we’ve achieved in the past 70 years defies imagination.”Rivlin cited as an example the fact that bilateral trade between Israel and the UK is around $8 billion. Seventy years ago, no one would have believed that such a thing would be possible, he said.Rivlin was particularly enthusiastic about Netafim’s drip irrigation systems, which has not only helped Israel but also reduced famine in the world. Established in 1965 in Kibbutz Hatzerim in the Northern Negev, Netafim has 29 subsidiaries, 17 manufacturing plants of irrigation equipment and 4,500 employees around the world, of which 1,100 are in Israel. Netafim’s exports for 2016 were in the range of $400 million. It’s was also the winner of the Export Prize.Both Rivlin and Cohen enthused over what Netafim has done to enhance Israel’s image in the world, and to bring water to places where water did not exist before.Netafim has helped to solve paucity of water problems in more than 110 countries and has enabled crops to flourish across land that was arid for centuries.  The company’s slogan is “grow more with less.”Cohen said that part of Netafim’s secret was to drip water on the plant rather than water the groundHe also noted the significance of the government’s decision to allocate $4 billion for the disabled. This was feasible only because of Israel’s strong economy, he said, adding that the strength of the economy stems from the success of Israel’s industry and exports.Commenting that innovation has been an Israeli trait since Biblical times, Cohen wondered aloud taking into account what is happening in the world today whether King Solomon would still say that there is nothing new under the sun.Using Netafim as an example, Cohen exclaimed: “Look at how Netafim has changed the world by bringing water to the aridest regions.”
It is because of Israeli innovation that world leaders flock to Israel to see what Israel has to offer, he said.Similarly, foreign companies operating in Israel have opened R&D and production plants in the country and have individually provided hundreds of jobs in industrial zones, said Cohen.Outstanding Exporter awards were presented to Cabiran Investment Casting Solutions, which is wholly owned by Kibbutz Cabiri in the Western Galilee; Elmo which provides solutions for motion control; Ham-Let valves and fittings; Bio Bee biological systems that provide solutions for pest management and natural pollination; A.L. Electronics, Engineering and Production Services Ltd.; and HP Indigo Digital Printing.