Rivlin, a seventh-generation Jerusalemite, is a staunch advocate for Israel’s capital. 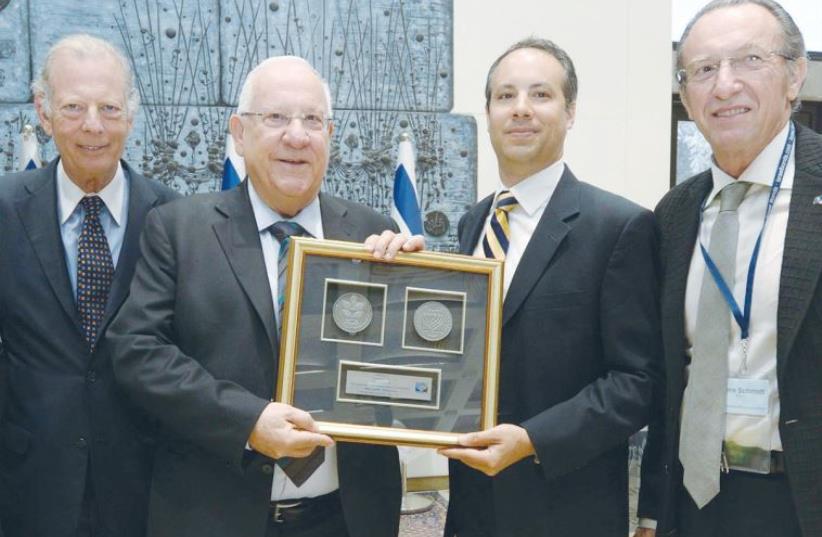 PRESIDENT REUVEN RIVLIN stands with members of an Israel Bonds delegation
(photo credit: MARK NEYMAN / GPO)
Advertisement
Israel’s most impressive accomplishment is the reunification of Jerusalem, President Reuven Rivlin said on Sunday in a meeting with members of an Israel Bonds delegation.Rivlin, a seventh-generation Jerusalemite, who seldom misses an opportunity to tell his guests that he is the son of the son of the son of a native Jerusalemite going back seven generations and that his grandchildren are ninth-generation Jerusalemites, is a staunch advocate for Israel’s capital.When interviewed, his customary greeting and farewell is: “Shalom, from Jerusalem.”On Sunday, the Gregorian calendar date of the 68th anniversary of Israel’s Declaration of Independence, Rivlin hosted a 140-member Israel Bonds delegation – the largest ever to come to Israel – which was visiting the country as part of the organization’s 65th anniversary celebrations.When Benjamin Goldkorn, one of the members of the delegation asked Rivlin what he considered to be Israel’s greatest achievement, the president’s initial response was: “that we could manage so many needs,” and he went on to list the absorption of refugees; fighting and winning several wars and continuing to cope with the burden of security; building up the country, the economy, the army and scientific endeavor; and the winning of 12 Nobel prizes to date.However, he then paused momentarily before saying: “When Jerusalem became united, it was the greatest day of my life.”Rivlin perceives Jerusalem as “a microcosm of our ability to live together and build confidence between Jews and Arabs. We need only one sovereignty in Jerusalem, and the city should be the capital of all believers around the world as the capital of peace. We are here to stay.”When asked by a participant from Ohio what he considered to be his legacy, Rivlin took the opportunity to once again promote his favorite mantra that Israel is both a Jewish and democratic state, and that there is no gap between Jewish and democratic.In his opening remarks, Rivlin referenced the recent UNESCO resolution, which ignored historic Jewish ties to the Temple Mount, and declared: “UNESCO goes against the facts because we have been here for 3,000 years and we have mentioned Jerusalem in our prayers during the 2,000 years we spent in the Diaspora.”In his preliminary address, Rivlin said he had been blessed to see the country grow around him.“I have been blessed to witness the miracle of the Jews returning to their homeland, and I have witnessed the miracle of seeing the desert bloom and the hi-tech boom. And all this we have done in the face of many threats from inside and outside.”Rivlin acknowledged that Israel could not have achieved all this without the support of Israel Bonds, which, in its 65 years of existence, has invested more than $40 billion in Israel and has grown from a solely American operation to an international one.Participants in the delegation came from North America, South America, Canada, Luxembourg, France and Mexico.“Israel Bonds is not just a way to show support for Israel,” said Rivlin.“It is a way to show faith in Israel – faith in our growth, faith in our development and faith in our future.”