Shimon Peres: A renaissance man and workaholic who outlived all his rivals

Peres outlived all his rivals, but pretended to take offense when anyone wished him long life to 120, asking why they were selling him short.

By GREER FAY CASHMAN
SEPTEMBER 28, 2016 11:34
Israel and the world bid farewell to Shimon Peres
Advertisement
“Don’t worry, I won’t forget to die,” Shimon Peres used to tell his adversaries, though he pretended to take offense when anyone wished him long life to 120, asking why they were selling him short.In the end, Peres outlived all his rivals.According to Jewish tradition, no prophet is heard in his own city. And, although Peres, who turned from hawk to dove, was sometimes mocked and even scorned in Israel for his efforts to bring about peace, he was greatly respected by the rest of the world as was evident from the accolades that flowed in after the longest serving of Israel’s public servants died on Wednesday.Peres had close ties with generations of world leaders, some of whose countries did not even have diplomatic ties with Israel. Some he met through their joint involvement in the Socialist International, others at World Economic Conferences in Davos, and still others in clandestine meetings around the world.Although there was no higher position to which Peres could aspire when he completed his seven-year presidential term in 2014, just two weeks shy of his 91st birthday, he did not disappear from the international stage.Well before the conclusion of his presidency, Peres, a Nobel Prize laureate, was already planning to continue much of what he had been doing – but from the Peres Center for Peace in Jaffa rather than the president’s mansion in Jerusalem.For Peres, ceasing to work would be equivalent to preparing for his death. He continued to travel abroad, albeit not with quite the same frequency, and he continued to grace numerous events, give interviews to foreign media, which lapped up whatever he had to say as if they were listening to the Oracle of Delphi.Yitzak Rabin, Shimon Peres and Yasser Arafat.(photo credit: REUVEN CASTRO)This workaholic nature caused tensions in his personal life; though he frequently called his wife, Sonia, the love of his life, he chose the presidency against her wishes and she never moved into the President’s Residence in Jerusalem.Once in the position, Peres developed a softer, more tolerant personality than he had displayed as a politician.He had the gift for becoming an instant statesman.He simultaneously exuded a sense of nobility and humility punctuated by his frequent declaration that a true leader is not a ruler of his people but a servant of his people.As a servant, Peres listened with great interest to what people from all walks of life, from many countries, communities and organizations said to him.And, when it came to Peres, the old adage that you can’t teach an old dog new tricks simply did not apply.He was forever learning about developments in any number of fields and asked pertinent questions of his interlocutors. He was never afraid to say he didn’t know or understand.His fertile imagination was constantly at work dreaming up projects and possibilities.As director-general of the Defense Ministry as a young man, Peres promoted Israel’s defense, aviation and nuclear industries.In later life, he was a keen advocate for nanotechnology, green industry and brain research.As a politician, he was often vilified. As president, he became a beloved statesman.Peres was the quintessential diplomat and statesman, attracting both the most important and most anonymous members of humanity at the same time. 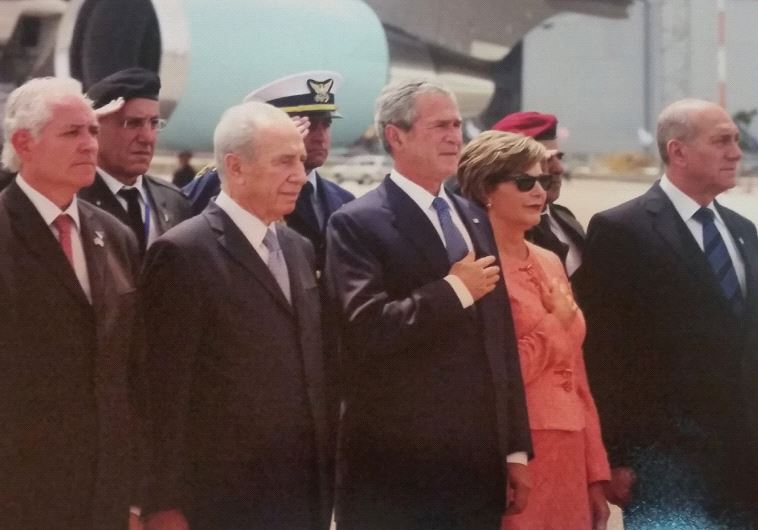 Shimon Peres and prime minister Ehud Olmert (right) with US president George W. Bush (photo credit: AVI DODI)Wherever he went in Israel, people lined up to be photographed with him and he obliged with infinite goodwill and patience.His office was a mandatory stop for internationally renowned dignitaries and celebrities visiting Israel who were on a sort of pilgrimage to see him.If anyone could be said to have had a full life it would be Shimon Peres.An immigrant from Poland, he attended the agricultural school in Ben-Shemen, and was one of the founders of Kibbutz Alumot.He was one of the founders of the Labor Zionist Youth Movement, a member of the Hagana during the pre-state period, director-general of the Defense Ministry at age 29, and a Knesset member from 1959 to 2007. He served in various political parties, spent a long period as Labor Party chairman and held a string of government roles including two nonconsecutive stints as prime minister, and headed various ministries.For his extensive travels around the world, Peres studied not only the history and politics of those countries, but also read their literature.It wasn’t simply a matter of intelligence and political or diplomatic strategy, but a courtesy to his hosts who were always astounded by the breadth and depth of his knowledge.Similarly, when he was president and accepted the credentials of heads of diplomatic missions in Israel, Peres always had a supply of anecdotes about past and present leaders of their countries; could quote from their most revered poets; and relate to their history.THEN PRIME MINISTER Shimon Peres greets newly released Prisoner of Zion Natan Sharansky at Ben-Gurion Airport (photo credit: GPO)Age notwithstanding, Peres was, in every respect, a renaissance man. He wrote prose and poetry and had a long string of honorary doctorates from leading universities in Israel and abroad. He also was an avid theater goer and visited museums and art galleries.Peres had many political rivals; some, such as Golda Meir, disliked him intensely while others, such as Yitzhak Rabin, disliked him personally but respected him. Peres and Rabin overcame their differences in the last years of Rabin’s life, actually developing a friendship.Yet, even in his twilight years, Peres, despite all the love, admiration and respect he earned as president, was still held in contempt in right-wing circles for his role in the Oslo Accords, with many blaming him for the upsurge in terrorist attacks and the large Israeli death toll in its aftermath.He received many honors at home and abroad, including the highest France and the United States could bestow.Peres, who knew every French president from Charles de Gaulle to François Hollande, was a great Francophile. He also was extremely well disposed toward the US, enjoying a warm relationship with almost every president from Dwight Eisenhower onward, and a particularly warm relationship with Bill Clinton and Barack Obama, who awarded him the Presidential Medal of Freedom, and personally called Peres after he was released from the hospital following a heart procedure in January 2015.