The suspects are alleged to have committed five robberies in one night during December, in Arugot and Kfar Ahimn. 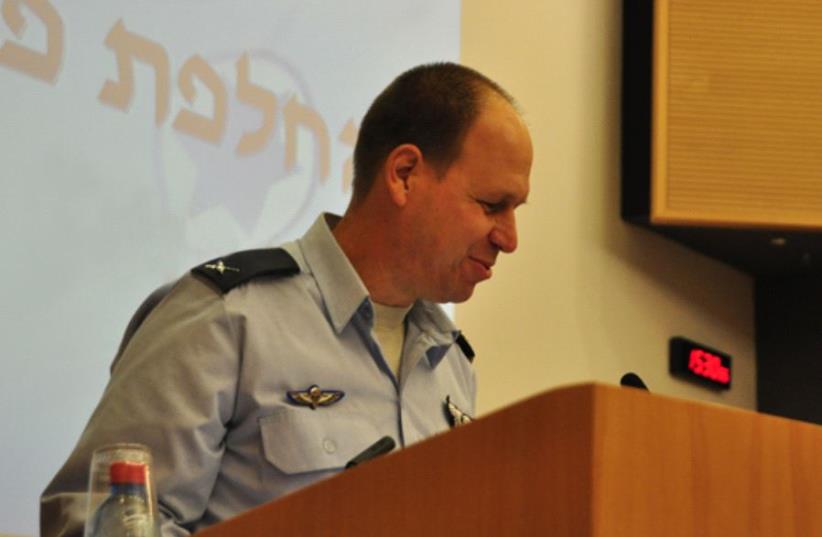 Maj-Gen. Hagai Topolansky
(photo credit: WWW.IAF.CO.IL)
Advertisement
Six Arab-Israeli and Palestinian men suspected of several break-ins, including stealing the laptop of an IDF general, were arrested in early February, the police announced on Monday. The stolen laptop incident led to the the resignation Maj. Gen. Hagai Topolansky, the Israeli military’s manpower directorate. Four of the men have already been served indictments, while indictments will be filed against the remaining two on Monday. In a statement police said that a “complex” operation including the assistance of an airborne unit and special forces, led to the location and arrest of the suspects - residents of the West Bank, east Jerusalem, and Beduin towns in southern Israel. The suspects are alleged to have committed five robberies in one night during December, in Arugot and Kfar Ahimn, in which several vehicles were stolen. Among those break-ins was the house of Topolansky. Topolansky resigned after it was revealed a laptop carrying sensitive information was stolen from his possession. The police said they were yet to recover the military laptop. As the stolen computer is IDF property, military police had launched an investigation and questioned Topolansky under caution where he explained what kind of information was on the computer. According to IDF protocol, military officers are forbidden from leaving military computers in their homes or cars where they are at risk of being stolen, to prevent classified information from falling into the wrong hands. Military laptops containing classified material must be kept locked in the base's vault.  The IDF has in the past dismissed officers from their positions after their military laptops were stolen. A lieutenant colonel in the air force was suspended for two weeks in October after his computer was stolen, and last year Lt.Col. Ilan Levy, an artillery commander in the northern command was dismissed after his car was stolen with military documents inside.  The documents were later found in the West Bank by the Shin Bet.According to police, the suspects operated in three squads that operated together. Including a team that would allegedly conduct the robbery, another team that would drive the men to the site of the robbery, others stole cars and transferred them to “cool off” before transferring them for resale. “We have used the best forces and means, both overt and covert, in order to bring those responsible for harming the personal security and quality of life of local residents behind the bars,” police said in a statement.