Maccabi defeats Hapoel in back-and-forth Haifa showdown to move up to fourth place. 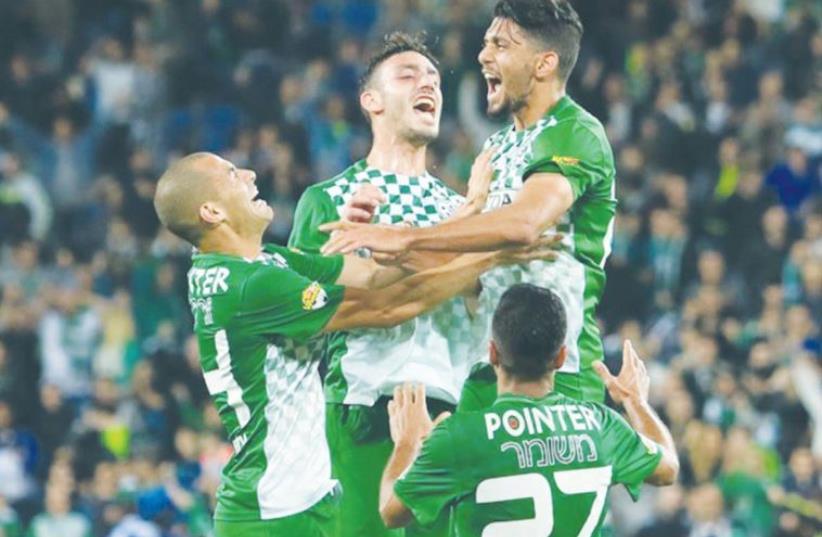 Maccabi Haifa midfielder Ataa Jaber (right) celebrates with teammates after scoring his side’s second goal in last night’s 3-2 win over Hapoel Haifa.
(photo credit: ERAN LUF)
Advertisement
Maccabi Haifa continued its recent revival with a 3-2 win over Hapoel Haifa in the derby on Sunday, climbing up to fourth place in the Premier League standings while handing its bitter rival’s survival hopes another blow.The Greens led by two goals at the break, but Hapoel equalized in the 68th minute. Maccabi would nevertheless leave Haifa Stadium with all three points thanks to Ofek Fishler’s own goal eight minutes later, leapfrogging Hapoel Ra’anana into fourth, while Hapoel remained in the relegation zone, two points from safety.Maccabi looked to be cruising at the interval, holding a two-goal cushion after dominating the first half. Glynor Plet headed in the opener in the 17th minute before Ataa Jaber made it 2-0 five minutes from the break.However, the Greens allowed Hapoel to seize control in the second half and almost paid a dear price for their lax approach. Hisham Kiwan brought the visitors back into the match three minutes into the second half and a Taleb Tawatha own goal in the 68th minute tied the score, with the defender tucking in Haim Megrelashvili’s pass from the left.However, Maccabi would have the last laugh, with Fishler turning Eyal Meshumar’s cross from the right into his own net in the 76th minute to give the hosts a lead they would maintain until the final whistle.Hapoel ended the match with 10 men after Hanan Maman was shown a straight red card in the 91st minute for a foul on Jaber.On Monday, Hapoel Beersheba looks to continue its remarkable run when it hosts Bnei Sakhnin at Turner Stadium in their regular season finale. Beersheba extended its Premier League unbeaten streak to 20 matches by claiming a club record eighth straight win last week, beating Hapoel Kfar Saba 2-1 on the road to reestablish a five-point gap over Maccabi Tel Aviv at the top of the standings.Maccabi moved within two points for a third straight week with Saturday’s 5-0 win over Kfar Saba.Beersheba has won 18 of its past 20 league matches, picking up 56 of a possible 60 points, an unprecedented haul over such a stretch in local soccer history.Sakhnin secured its place in the championship playoffs with last week’s 3-0 win over Ironi Kiryat Shmona, registering its fifth win over the past six matches.Sakhnin hasn’t conceded a goal over that stretch, last taking a ball out of its net back in mid-January when it lost 1-0 to Beitar Jerusalem.“Every team has something to fight for. Sakhnin is three points from fourth place and in a certain situation fourth could lead to European qualification,” said Beersheba coach Barak Bachar. “I’m sure they will fight and they are in excellent form. This is one of the better teams in the league at the moment. It certainly won’t be easy and if we are not ready we will be in a problem.”A win on Monday will ensure Beersheba will lead the standings ahead of the showdown with Maccabi Tel Aviv in two weeks, but Bachar insisted he isn’t thinking of that match just yet.“We want to continue our run. There is still plenty of time until the match with Maccabi,” he explained. “Both teams will face tough matches beforehand and our entire focus is on the game against Sakhnin which is going to be very difficult.”