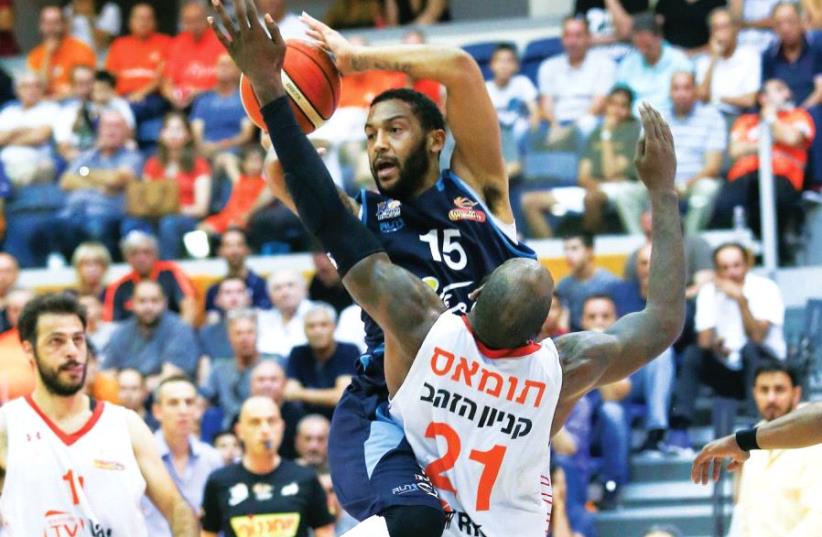 Hapoel Eilat ’S Pierria Henry (15) scored a game-high 34 points in last night’s 94-91 win over Charles Thomas and Maccabi Rishon Lezion to tie their quarterfinals series at 2-2.
(photo credit: ADI AVISHAI)
Advertisement
Maccabi Haifa became the first No. 8 seed to knock out a No. 1 seed in BSL playoff history on Sunday night, completing a 3-1 series win over Hapoel Holon with a 99-82 victory in Game 4 at Romema Arena.Despite only qualifying for the playoffs on the final day of the regular season, Haifa never looked like an underdog in the series.Holon won Game 1 at home in double- overtime, but Haifa tied the series with a 31-point triumph at home in Game 2 before winning 78-77 on the road in Game 3.After a tight first half ended in a fourpoint Haifa lead (46-42) on Sunday, the Greens established a double-digit gap in the third quarter. Holon fought back, but Haifa would reply with a 13-3 run to clinch the win.Haifa will face Maccabi Tel Aviv in the Final Four semifinals at Yad Eliyahu Arena next Monday. Tel Aviv completed a 3-0 sweep against Bnei Herzliya last week.The second semifinal has yet to be decided, with Hapoel Eilat to host Maccabi Rishon Lezion in a decisive Game 5 on Wednesday after tying the series at 2-2 with a 94-91 road victory on Sunday.The winner of Game 5 in Eilat on Wednesday will face in the semifinals the winner of the series between Hapoel Jerusalem and Ironi Nahariya.On Monday, Jerusalem will try and force a decisive Game 5 when it visits Nahariya, which leads the best-of-five series 2-1.There was little to separate the teams in the first half in Haifa, with an Oz Blayzer three-pointer giving Haifa a four-point lead (46-42). Haifa slowly but surely extended its lead in the third period, taking it to double- digits (59-49) for the first time with six minutes left in the quarter.A Darion Atkins basket made it a threepoint game (80-77) with just over six minutes remaining, but Haifa showed its character once more to complete the upset.John DiBartolomeo continued his sensational series for Haifa, scoring 24 points. Orlando Mendez-Valdez also netted 24 points, with Kevinn Pinkney adding 19 points and 12 rebounds.Jordan Taylor had 23 points and nine boards for Holon.Rishon had a three-point edge (22-19) after a tight first period, but Eilat opened the second quarter with a 9-0 run to take a lead it wouldn’t relinquish.Eilat’s lead was at nine points (44-35) at the break and the southerners were cruising with 6:30 minutes to play in the third frame, extending their margin to 18 points (80-62). The game looked to be over, but Rishon never gave up the chase and a Charles Thomas three-pointer brought it within three points (88-85) with 39 seconds remaining.But Rishon couldn’t complete a comeback and will have to win in Eilat for the second time in the series or its season will be over.Pierria Henry exploded with 34 points for Eilat, with Landon Milbourne adding 23 points and eight rebounds. Patrick Richard led five Rishon players in double figures with 16 points.On Monday, Jerusalem will try and force a decisive Game 5 when it visits Nahariya, which leads the best-of-five series 2-1. After two dejecting defeats to start the series, Jerusalem bounced back with an 84-75 win at home in Game 3. But Hapoel will have to win on the road at Ein Sara Arena on Monday to send the series back to Jerusalem for a decider on Thursday.