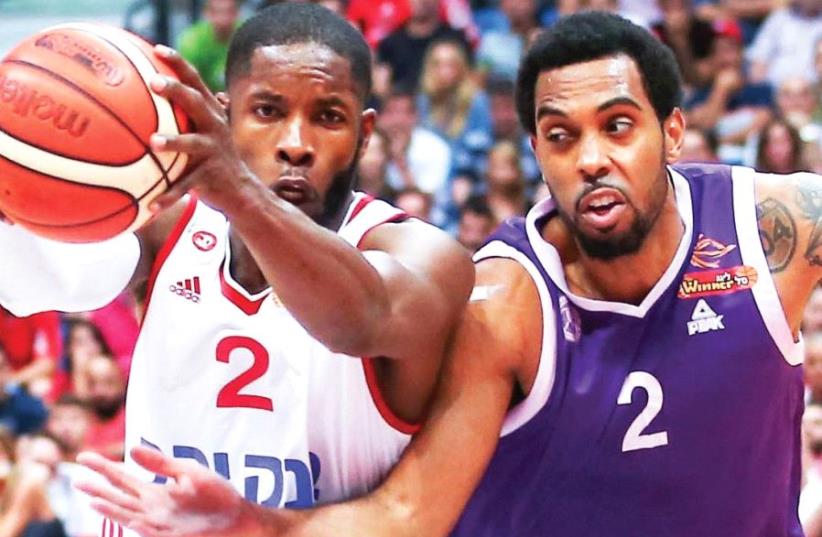 Hapoel Jerusalem guard Jerome Dyson (left) scored a game-high 16 points in last night’s 71-60 win over Derwin Kitchen (2) and Ironi Nahariya in the decisive Game 5 of their BSL quarterfinals series.
(photo credit: DANNY MARON)
Advertisement
Hapoel Jerusalem booked the final ticket to the BSL Final Four on Thursday night, becoming just the third team in playoff history to come back from a 0-2 hole by beating Ironi Nahariya 71-60 at the Jerusalem Arena.Nahariya surprisingly won the first two games in the series and came tantalizingly close to completing the upset in Game 4. Derwin Kitchen’s three-point attempt at the buzzer missed the basket, allowing Jerusalem to breath a huge sigh of relief after holding on for a two-point victory to send the series to a winner-takes-all Game 5.Hapoel was in control for most of the decider, but didn’t clinch the win until the closing minutes. Jerusalem held Nahariya without a field goal for the closing five minutes of the contest, scoring 14 of the final 19 points of the night to progress to the last four for a fifth straight year.Jerusalem will face Maccabi Rishon Lezion in the Final Four semis at Yad Eliyahu Arena in Tel Aviv on Monday. Rishon completed a 3-2 series win over Hapoel Eilat on Wednesday.In the second semifinal of the night, Maccabi Tel Aviv will play Maccabi Haifa.Jerome Dyson led Jerusalem with 16 points on Thursday, with Travis Peterson adding 13.“We feel great coming back from 0-2,” said Dyson. “We weren’t worried.We didn’t play bad in those games. We let the first one slip away and were sluggish in the second one. But we always knew we were capable of winning three straight games.”Jonathan Skjoldebrand had 14 points for Nahariya, which still hasn’t won a playoff series since 2004.Jerusalem got off to an encouraging start, especially on the defensive end. The hosts held Nahariya to 11 points in the first 10 minutes and was ideally placed entering the second quarter, leading by 11 points (22-11).A Travis Peterson basket to start the second period took the gap to 13 points, but Nahariya would reply with a 16-2 run, with Hapoel losing its way on offense.The hosts ensured they were ahead at the break after outscoring Nahariya 6-0 in the final three-and-a-half minutes of a scrappy first half (32-27) in which the teams combined for 17 turnovers and went 4-of-18 from three-point range.Five straight points by Skjoldebrand made it a two-point game (34-32), but Jerome Dyson and Lior Eliyahu combined for 10 points to keep the hosts ahead (44-39).Nahariya was soon back within a point (44-43), only for Jerusalem to end the frame with a 10-2 surge. Amar’e Stoudemire’s dunk was followed by a fortuitous buzzer-beating three from Bar Timor, giving Hapoel a nine-point cushion (54-45) entering the final 10 minutes.Derwin Kitchen’s basket with 6:47 minutes remaining kept Nahariya within striking distance (57-52) and also ended Eliyahu’s game, with the Israeli forward picking up his fifth foul.Pressure continued to mount on the hosts when Niv Berkowitz hit a three to cut the gap to two points (57-55), but Nahariya would come no closer until the final buzzer. Five straight points by Peterson gave Jerusalem some breathing space (62-55) and Yotam Halperin’s triple with 1:38 minutes remaining opened a 12-point margin which Nahariya was never going to erase.