In the middle of a playoff race, fans momentarily shift their focus to baseball

After three hours of baseball, Israel walked away with a 5-2 victory. 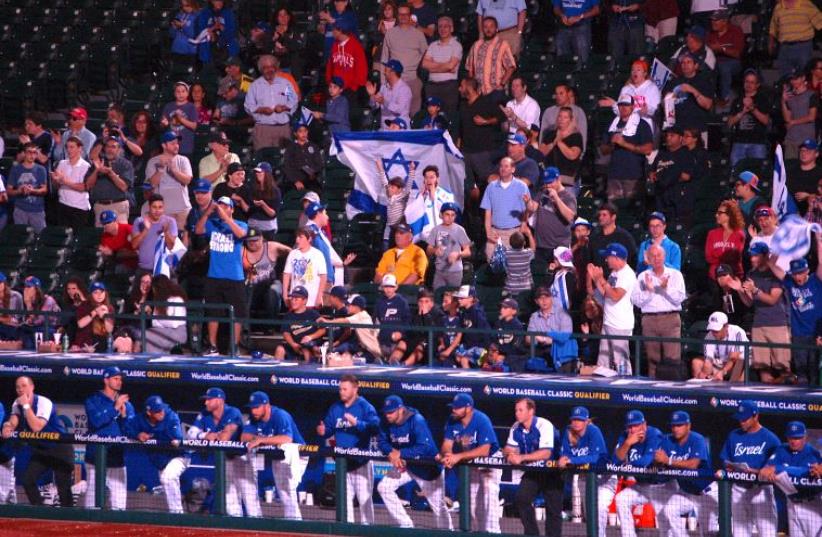 Fans cheer for Israel in their win over Great Britain.
(photo credit: JOSH SOLOMON)
Advertisement
BROOKLYN, NY – He checked his smart watch. The Mets were winning over in Queens, playing in a game heavy with tensions of the final weeks of the months long season, hoping to hang onto a playoff spot. In front of him was Israel’s national team tied with Great Britain’s national team, playing in a minor league stadium (that of which belongs to the Mets) on the shore of Coney Island. The formula was there: a Thursday night, the national team playing, a game that marked the beginning of a four-year-long pursuit of redemption – if the game was played in Israel, the ballpark may have been packed. A school and work night for many in New York resulted in a smaller, but still relatively sizable crowd, but for those who knew, they saw Team Israel win its opening game of the World Baseball Classic qualifying round. The fans who showed up to a 7 p.m. game on a Thursday night may have been an overwhelming Mets crowd, with season ticket holders for the major league franchise receiving early ticket buying opportunities, but were dressed mostly in a Team Israel blue. People were lined up at the gates two hours before the game. They wore Israel jerseys, some of which were soccer jerseys, others that were bought the day-of and then select ones who had from Israel’s first appearance in the WBC in 2012 (one fan wore his Team Israel hat that he bought four years ago for the first time Thursday night, joking that he had to prove to his wife it was a good purchase). Some were draped in Israeli flags. Others wore paraphernalia from their Yeshivas, and one could be spotted with a ‘Shalom Brooklyn‘ shirt in Hebrew letters, from when the Brooklyn Nets basketball team moved into town.  Many who came were religious and filled the queue to the kosher eating stations through the evening. When a vendor walked the stands selling ice pops he yelled, “All natural, three dollars, all natural ices, three dollars...and it’s kosher!” Before the game began the flags of all four teams playing in the qualifier in Brooklyn to clinch the final spot in the WBC in March were presented on the field: Israel, Great Britain, Pakistan and Brazil. Three national anthems were played. First was the British anthem. Then a choir from a Yeshiva in Flatbush sang Hatikva – which prompted Team Israel, standing along the first baseline to remove their caps and to replace it with official team kippot. Following Hatikva, a student from the Yeshiva then sang the United State’s national anthem.  When the game got underway, some of the usual confusing fan loyalty ties played out as well as one Yankees fan watched former Red Sox catcher Ryan Lavarnway. "He's a former Red Sox so I want to boo him, but I can't because," he says at motioning to the Team Israel uniform. On the next pitch Lavarnway ripped a pitch down the left field line, just foul, but prompting the reactionary cheers to a hard hit ball from the baseball fan. Local legend, Jason Marquis earned the start. The Staten Island native, who played both in the Little League World Series and the Major League World Series was welcomed by a big hand from the crowd, including your fair share of heckling from the Great Britain side. "It's nice to be in a competitive atmosphere and pitch for something so meaningful," Marquis said. When former Mets slugger came off the bench to pitch hit in a crucial spot in the 7th inning with the bases loaded, the Brooklyn crowd ushered him with a roar worthy of the late-great Hank Greenberg. Davis, like some of his teammates, spotted a compression sleeve, similar to the one current Met star Yoenis Cespedes wears, but this one was not neon green but rather white with a blue Star of David. In Davis’ nine-pitch long at-bat, he fouled off a ball into the stands down the left field line. As the ball was drifting its way over the stands and onto the food concourse one fan frantically could be heard, “Ike Davis fly ball, Ike Davis fly ball, Ike Davis fly ball,” as he bolted out of his seat among a crowd in pursuit of the errant ball. When the day’s Hebrew Hammer did hit one through the middle of the infield for an RBI single, the crowd erupted. “He had a sneaky fastball and I kept fouling it back. I got to a 3-2 count a couple times and finally got a pitch I could handle and squares it up,” Davis said after the game. “And thank God it found the hole.”After three hours of baseball, Israel walked away with a 5-2 victory, advancing into the winner’s half of the double-elimination bracket. Israel plays Brazil, the 10-0 winner over Pakistan, at noon on Friday.Over an hour after the final pitch Thursday night, a notification rang in that the Mets game was over. About a quarter to midnight in New York, the team from Queens hit a walk-off home run in the 11th inning to win the game. And with that, for many fans, meant the end of a night of baseball – until about 12 hours later when it starts back up.