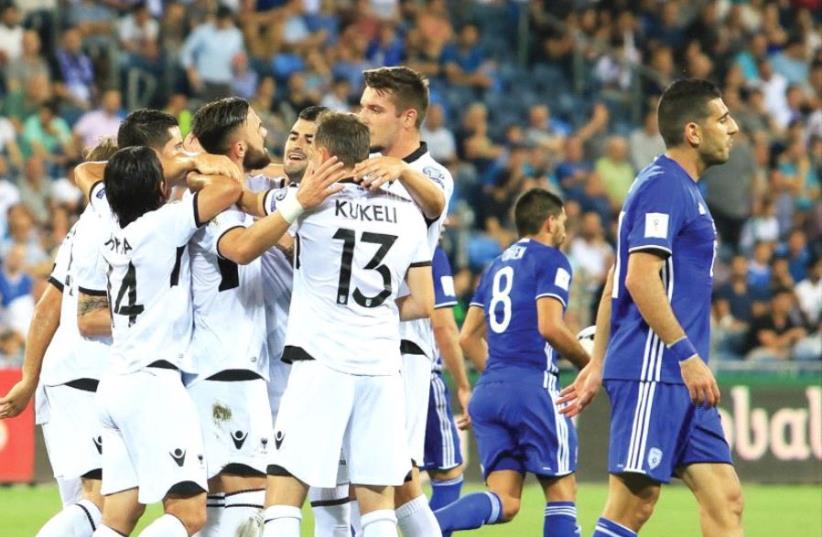 Albania pla yers celebrate their team’s opener in last night’s 3-0 victory over Israel in Haifa, with dejected blue-and-white defender Eitan Tibi (right) walking away in disgust.
(photo credit: ERAN LUF)
Advertisement
Israel’s poor play finally caught up with it on Sunday night, with the blue-andwhite suffering a humbling 3-0 loss to Albania in 2018 World Cup qualifying in Haifa.Israel could have all but accomplished its initial target in Group G by opening a six-point gap over Albania in the battle for third place with four matches to play.But instead, it dropped to a dejecting defeat that saw Albania leapfrog into third and gave the national team an alarming wake-up call.Since Israel discovered back in July 2015 that it would be facing both Spain and Italy in the group, it was clear that its realistic goal should be to finish in third place. Only the winners of each group will qualify automatically for Russia 2018, with the eight best runners-up to advance to home-and-away playoffs.Israel knew from the start that Albania was its main rival and it beat a nine-man Albania 3-0 on the road in November. But the national team looked lost on Sunday, with Armando Sadiku netting a first-half brace (22, 44) before Ledian Memushaj (71) secured the win in the second half.Sunday’s loss marked the start of the second half of Israel’s qualifying campaign.The blue-and-white will be expecting to pick up all three points when it hosts Macedonia in Haifa in its next qualifier on September 2 before visiting Italy without any expectations three days later.Israel will complete its campaign in October, going to Liechtenstein on October 6 three days before it hosts Spain at Teddy Stadium in Jerusalem in its final qualifier.After requiring a Ben Sahar stoppage- time penalty to snatch a 1-1 draw last week against a Moldova side that has only beaten San Marino and Andorra over the past three years, Israel’s coach and players insisted that everything would be different against Albania.Israel was lackluster from the start, struggling to create chances and allowing Albania to control the possession. The visitors were far from impressive, but they didn’t need much to open a two-goal lead by the break.The small contingent of Albania fans was louder from the 15,000 locals from the start and was given something to celebrate in the 22nd minute. Bibras Natcho’s poor clearance went straight to the feet of Odise Roshi and he found Sadiku in space.Any hope that Albania’s opener would jolt Israel into life was soon dashed, with the hosts failing to muster a response. The blue-and-white’s defensive frailties were exposed once more one minute before the break, with Sadiku scoring an almost identical goal to the first, firing into the bottom left corner yet again, this time from five meters further out.Striker Itay Shechter replaced midfielder Eyal Golasa in the 53rd minute, with Idan Vered coming in four minutes later in place of Lior Refaelov. Israel coach Elisha Levy made his third and final substitution in the 67th minute with Yossi Benayoun replacing Ben Sahar, but it was Albania which scored again.Memushaj slotted in from close range after a well-worked team move in the 71st minute and many of the fans that didn’t leave the stadium early let the players know what they thought of their performance with resounding boos at the final whistle.