J’lem and Mac TA to battle in cup final 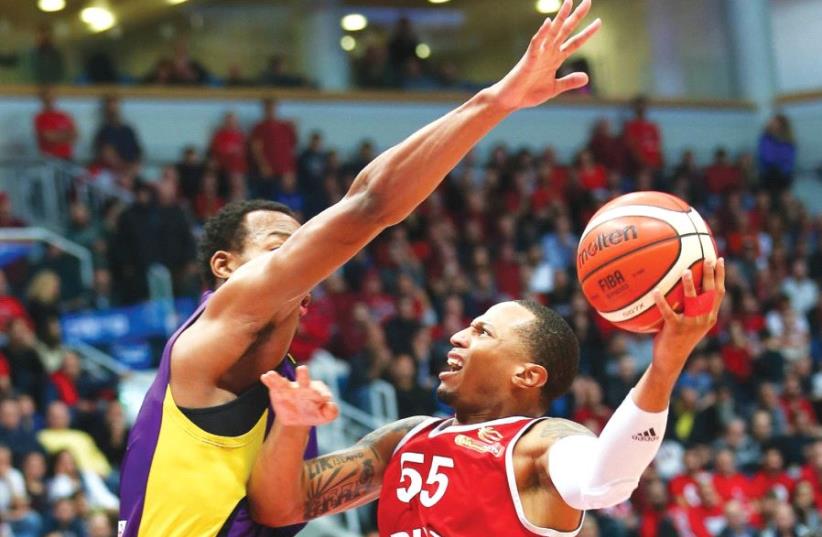 Hapoel Jerusalem guard Curtis Jerrells beats Hapoel Holon’s Darion Atkins to the basket during last night’s win in the State Cup semifinal, with Maccabi Ashdod guard Chase Simon
(photo credit: DANNY MARON)
Advertisement
The two powerhouses of Israeli basketball, Hapoel Jerusalem and Maccabi Tel Aviv, will face off in a local final for just the second time in the past nine years when they vie for the State Cup in Jerusalem on Thursday.Maccabi beat Jerusalem in the cup final two years ago in what was the only meeting between the two teams in a BSL or cup title game since 2008.The yellow-and-blue has dominated the State Cup in recent years and will be targeting an eighth straight triumph on Thursday.Maccabi’s 95-89 win over Maccabi Ashdod in Monday’s first semifinal at the Jerusalem Arena extended its unbeaten streak in the competition, which stretches back to December 2008 when it was defeated by Ironi Nahariya in the last 16.Jerusalem will be playing in the final for just the second time since its last triumph in 2008, beating Hapoel Holon 68-59 in the second semi.Hapoel claimed its 12th win from the past 14 games, and will be aiming to finally lift the cup once more ahead of three consecutive road games and the Eurocup quarterfinal series against Gran Canaria.Jerusalem and Maccabi met in BSL action just last week, with Hapoel winning 74-63 at the Jerusalem Arena.In the second semi of the night, Stoudemire continued his recent excellent form, but Jerusalem opened an early lead mainly thanks to its play on defense. Hapoel held Holon to just 12 points in the first quarter and Stoudemire scored eight of his team’s 18 points to establish a six-point advantage after 10 minutes.Jerusalem couldn’t build any momentum though, losing its rhythm in the second period.Simone Pianigiani’s team scored only one field goal in the final six minutes of the first half, allowing Holon to take a two-point lead into the interval despite scoring just 29 points.Jerusalem didn’t take long to regain the lead in the second half, but it was still anyone’s game with 10 minutes to play, with Hapoel holding a twopoint edge (44-42).Jerusalem had lost to Holon in their previous two meetings in the BSL this season, but that was a different Holon side. Dan Shamir lost star guard Khalif Wyatt, the BSL’s top scorer, until the end of the season after he suffered a serious knee injury in last week’s win over Maccabi Rishon Lezion. Dagan Yivzori also hurt his knee in the same game, and will miss the next four weeks.Holon managed to remain close for much of the second half as well, but eventually ran out of fresh legs and Jerusalem prevailed.Tarence Kinsey led Jerusalem with 19 points, with Stoudemire finishing with 10 points and seven rebounds.Darion Atkins had 18 points for Holon.Maccabi coach Ainars Bagatskis insisted that his team shouldn’t have even been considered the favorite against Ashdod, which entered the semifinal on the back of five straight losses in the BSL.“Why do you count us as the favorites? In the cup you play one game and anything can happen,” explained the Latvian.“In the fourth quarter I tried to find the lineup that would not only score on offense but also play on defense.”Victor Rudd led Maccabi with 22 points, with D.J. Seeley scoring 17 points and Guy Pnini and Gal Mekel adding 13 points each.Jackie Carmichael led five Ashdod players in double figures with 20 points and 12 rebounds. Ashdod scored 16 points more than it is averaging in the BSL this season on Monday, thanks in large to 15 offensive rebounds, but it couldn’t avenge last season’s defeat to Maccabi in the final.Tel Aviv was the first to pull ahead, with Colton Iverson’s lay-up giving the yellow-andblue a seven-point gap (17-10).Maccabi took a five-point lead into the second quarter and established what seemed like to be a promising 13-point gap (33-20) with an 11-3 run.However, as has often been the case this season, Tel Aviv failed to build on an early lead, with Ashdod holding Maccabi without a field goal for over five minutes to close within two points (37-35) following Carmichael’s dunk from an offensive rebound with 2:44 minutes to play in the first half.Tel Aviv remained in front until the break, taking a fivepoint advantage (49-44) into the second half. Ashdod was within striking distance for much of the third period, but an 8-0 run, sparked by five straight points from Victor Rudd, reestablished a double- digit margin (65-55) for the yellow-andblue and Maccabi led by eight points (69-61) ahead of the final 10 minutes.Ashdod was never too far behind though, with Chase Simon’s triple making it a threepoint game (83-80) entering the final three minutes.Tel Aviv was ahead by just two points (88-86) with one minute to play, but it never allowed Ashdod to complete its comeback, holding on to advance to another final.