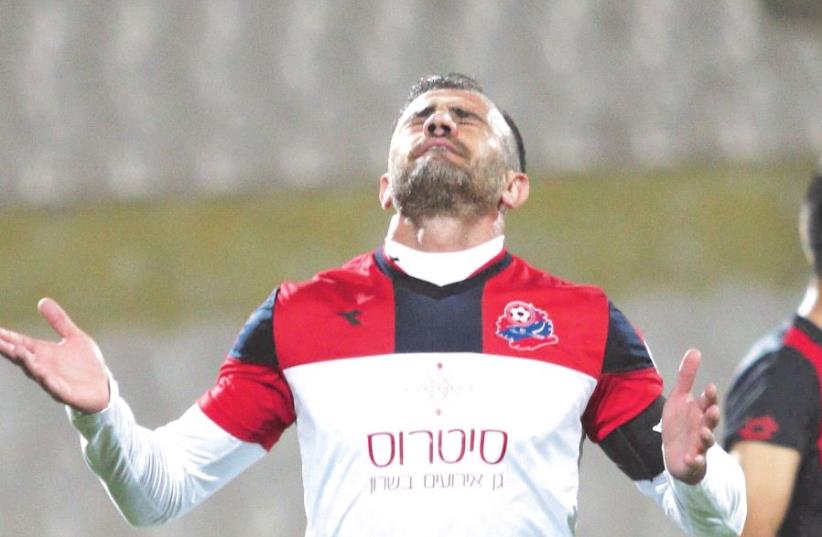 Hapoel Haifa striker Maharan Lala is in danger of being handed a substantial suspension after testing positive for a banned substance
(photo credit: ADI AVISHAI)
Advertisement
Maharan Lala, one of the Premier League’s leading scorers in recent seasons, has tested positive for a banned substance, the Israel Football Association announced on Wednesday.The 35-year-old Hapoel Haifa striker denied any wrongdoing and plans to fight for his innocence. If found guilty, he faces the prospect of being suspended for several years, possibly ending his career.The IFA didn’t specify what substance was found in Lala’s urine samples taken after the match against Hapoel Kfar Saba on May 13.Lala, who joined Haifa in 2012 after four years at Hapoel Tel Aviv during which he won one championship and three State Cups, told club officials that he had gone to the dentist on the day of the match and is certain that the painkillers he received during the treatment are what caused the positive result.Lala has asked for his B sample to be tested, with the result expected over the next two weeks.“I have never used a banned substance and I’m certain that it will soon become clear that this was a mistake and a storm in a teapot,” said Lala in a statement. “I plan to fight for my innocence and my good reputation and to play soccer for many more years. I thank the many fans across the country, and Hapoel Haifa fans in particular, for the support and I hope to soon repay them on the field.”Hapoel Haifa is backing Lala’s version of events. “Maharan Lala is the captain of the team and a model athlete, a symbol of coexistence and a role model for the youth,” read a club statement.“We believe that a mistake has been made and that Maharan has no connection with the use of any banned substance.”With Haifa yet to begin its pre-season training, there was no need to take any immediate action and suspend Lala while he awaits the results of the B sample and possibly a tribunal.The Israeli clubs playing in Europe are already well into their preparations for 2017/18, with the likes of Maccabi Tel Aviv and Beitar Jerusalem to be in action in the first round of the Europa League qualifiers next Thursday.Both teams are currently in training camps abroad, with Maccabi drawing 1-1 with Slovakian side AS Terecin in its first preseason friendly match on Tuesday.“The most important thing was to test the players who have come back from loan. There was also a lot of young players and to see how they develop,” said Maccabi’s new head coach Jordi Cruyff. “In these kind of games we try to split them up into two and the most important thing is that the players show themselves and that they understand the basic concepts that we look for. It’s very early to demand things. For me the most important thing is that they play free and that they try to prove themselves.”Omer Atzili and Ofir Davidzada, who joined the team after an unsuccessful one-year stint abroad, didn’t feature on Tuesday.Or Inbrum is hoping his time in Europe will prove to be more successful, with the 21-year-old completing a surprise move from Ashdod SC to KAA Gent, joining fellow Israelis Rami Gershon and Kenny Saief.Gent paid a fee estimated at 1.6 million euro, with Ashdod retaining a 50 percent stake.