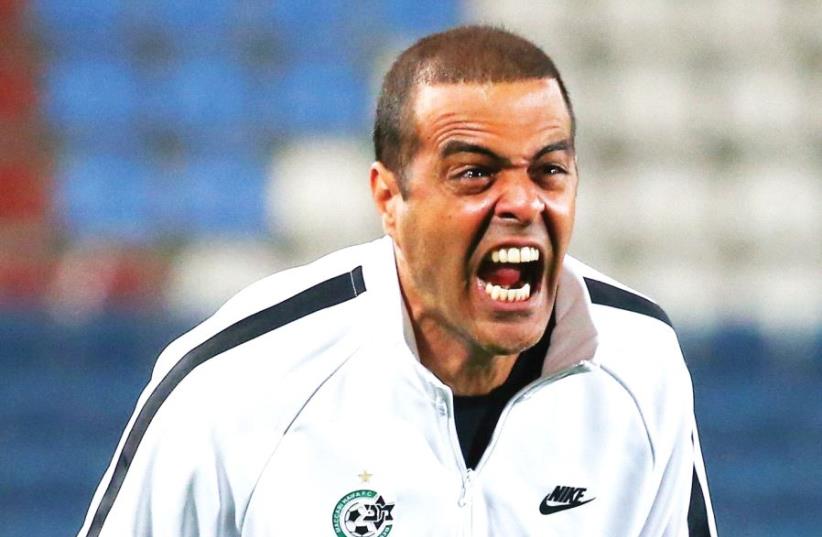 Maccabi Haifa will be hoping to see another of coach Guy Luzon’s trademark wild celebrations on Saturday when the team hosts Hapoel Ra’anana in its final regular season match
(photo credit: DANNY MARON)
Advertisement
Millions of shekels, a chance to qualify for European competition and plenty of pride will be up for grabs for Maccabi Haifa when it hosts Hapoel Ra’anana in Premier League action on Saturday night.Haifa is part of a three-way battle for the final two tickets to the top-six championships playoffs, which will be decided on Saturday.Haifa enters its final regular season match tied on points and goal difference with Ironi Kiryat Shmona in sixth place, with the latter having the edge having scored more goals. Bnei Sakhnin is three points further in front.Every goal could prove to be crucial on Saturday, with Haifa’s match and those between Kiryat Shmona and Hapoel Kfar Saba, and Bnei Sakhnin and Hapoel Tel Aviv to all kick off at the same time.Kiryat Shmona snapped a five-match winless streak with last weekend’s 2-1 victory at Hapoel Haifa and hosts a Kfar Saba side which hasn’t won in 16 games, a run going back four months.Sakhnin, which has lost just twice in its past 15 contests, only requires a draw to secure its progress, while Haifa needs to register a better result than Kiryat Shmona or face the prospect of playing in the relegation playoffs.In the championship playoffs, the top six will play each other twice more for a total of 10 matches for each team to decide final positions. In the relegation playoffs, the bottom eight sides face one another one more time for a combined seven games each, with the bottom two sides to be demoted to the National League.Qualification for the championship playoffs will not only keep alive Haifa’s hopes of reaching European competition next season, but will also guarantee the club big pay days with additional home matches against Hapoel Beersheba, Maccabi Tel Aviv and Beitar Jerusalem.Fourth place at the end of the season will be good enough for a place in the Europa League qualifiers in 2017/18 should either Maccabi Tel Aviv or Beitar Jerusalem win the cup and finish in the top three.Haifa, which began the season with title aspirations, is currently five points back of Beitar in fourth, but for that gap to have any significance it first needs to make sure it ends the regular season in the top six.One the main reasons for the timing of coach Rene Meulensteen’s sacking and his replacement with Guy Luzon last month was due to Haifa’s fear of missing out on the championship playoffs.The Greens have picked up six of a possible nine points under Luzon so far, but remain without a home win since November, a streak of seven matches.Also Saturday, Maccabi Petah Tikva hosts Ashdod SC.Maccabi Tel Aviv can move tied on points with leader Hapoel Beersheba for at least 24 hours when it welcomes Hapoel Haifa on Sunday, with Beersheba hosting Beitar Jerusalem on Monday.