Coming off local conquest of Maccabi Tel Aviv, Hapoel targets to finish Top 16 on a high. 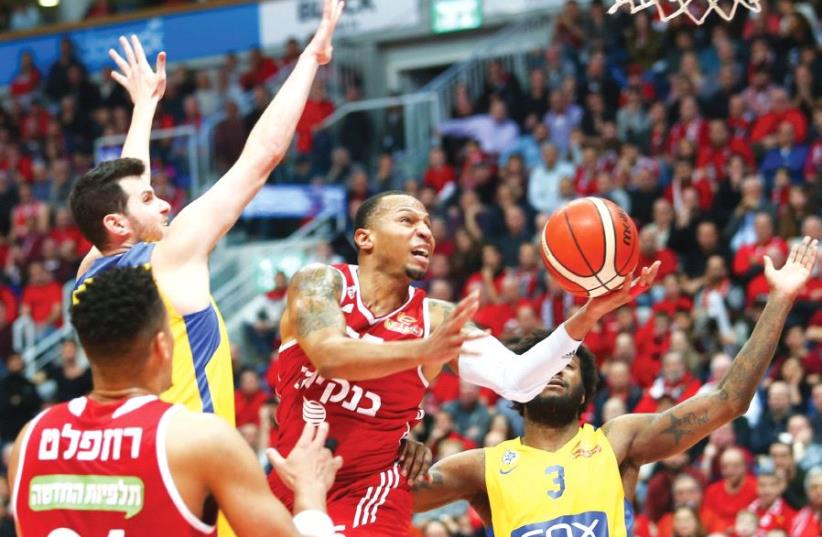 Hapoel Jerusalem guard Curtis Jerrells looks to continue his rich vein of form in tonight’s Eurocup Top 16 clash against Nizhny Novgorod in Russia.
(photo credit: DANNY MARON)
Advertisement
Hapoel Jerusalem aims to avoid an unexpected setback and claim another significant victory in its Eurocup campaign when it visits Nizhny Novgorod in its final Top 16 game on Wednesday night.Jerusalem booked its place in the quarterfinals and remained on track to win Group G by defeating Lietuvos Rytas Vilnius of Lithuania 84-77 at the Jerusalem Arena last week.Hapoel improved to a 4-1 record and will clinch first place with a victory in Russia. The top two from the group will advance to the quarterfinals, but winning the group could prove to be crucial as it ensures home-court advantage in the best-of-three quarterfinal playoff series. The record with which Jerusalem finishes the Top 16 could also end up being important, with homecourt advantage in the best-ofthree semifinal and final series’ to be decided by Top 16 records.The only way Hapoel can fall from first place is if it loses and Zenit St Petersburg wins its do-ordie game with Lietuvos Rytas.Jerusalem will be confident of completing the job in Russia after claiming its 10th win in 12 games over all competitions by beating Maccabi Tel Aviv in BSL action on Sunday. Nizhny has nothing to play for after falling to a 1-4 record last week and has lost four games in a row. Jerusalem beat Novgorod 98-76 when they met in Israel, with the Russians losing their three contests since by an average of 28 points per game.The team to finish Group G in second place will face Lokomotiv Kuban Krasnodar of Russia in the quarters, while the group winner will await the winner of the game between Spanish sides Gran Canaria Las Palmas and Fuenlabrada.The quarterfinals will be played from February 28 until March 8, but Jerusalem is not looking too far ahead and is determined to take one game at a time, starting with Wednesday’s showdown in Russia.“Every game is important and we are trying to bring the right energy to every game,” said Jerusalem coach Simone Pianigiani.“This is another game that we will need to be at our best. Our focus at the moment is on the Eurocup and we will then turn our attention back to local play.”Jerusalem faces Hapoel Holon in the semifinals of the State Cup next Monday.“We realize the importance of the game against Nizhny,” said Lior Eliyahu, who refused to discuss the cup semifinal until after the game in Russia. “They have nothing to play for, but they are an excellent home team and we will need to be focused to win this tough road game.”After a slow start to the season, Amar’e Stoudemire has displayed a significant improvement over recent weeks, averaging 20.6 points and 8.3 rebounds in the team’s past three Eurocup games and 21.5 points in the last two BSL contests, including 24 points in the win over Maccabi.“I expected he would have some teething problems,” said Eliyahu. “We knew it would be difficult for him to adjust after so many years in the NBA, but he has been great in recent games.”Elsewhere, Maccabi Rishon Lezion hosts Riesen Ludwigsburg of Germany in the first leg of their playoff qualifier for a place in the FIBA Champions League round-of-16. Rishon advanced to the playoffs after ending Group B of the regular season in fifth place with a 7-7 record. The second leg will take place in Germany on February 22.