Sela cruises into final of Nottingham event vs Fabiano

The 32-year-old Israeli, ranked No. 98 in the world, will be targeting his second Challenger title of the year, and 22nd of his career, when he faces Italy’s Thomas Fabiano. 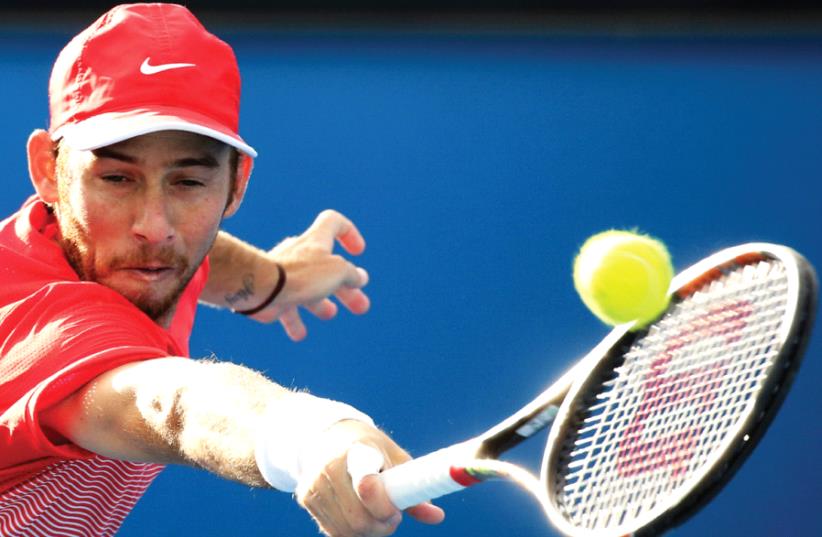 Dudi Sela
(photo credit: REUTERS)
Advertisement
Dudi Sela aims to pick up some much-needed confidence ahead of Wimbledon when he plays on Sunday in the final of the Challenger circuit event in Nottingham, England.The 32-year-old Israeli, ranked No. 98 in the world, will be targeting his second Challenger title of the year, and 22nd of his career, when he faces Italy’s Thomas Fabiano (103). Sela, who is seeded No. 3 in Nottingham, advanced to the final on Saturday after Romanian Marius Copil (91) retired while the Israeli was leading 7-6 (4), 1-0. Fabiano overcame Australian Sam Groth 6-4, 6-3 in the other semifinal.Sela missed his first Grand Slam tournament in four years last month when he chose not to play in the Roland Garros qualifiers after just missing out on an automatic berth in the main draw.The best achievement of Sela’s Grand Slam career came at Wimbledon when he reached the last-16 in 2009. However, he hasn’t progressed past the first round at the All England Club since 2011.In other tennis news, Juan Martin del Potro’s Wimbledon preparations have been thrown into disarray after the Argentine was forced to pull out of this week’s Aegon Championships at Queen’s Club with a groin injury.Former US Open champion Del Potro, ranked 30 in the world after a steady rise up the rankings following a succession of career-threatening wrist injuries, also pulled out of last week’s grass-court event in Den Bosch.It means the Argentinian faces the prospect of arriving at Wimbledon without any grass-court matches under his belt.Queen’s, which features world No. 1 and Wimbledon champion Andy Murray and world No. 3 Stan Wawrinka, has also lost French Open champion Rafael Nadal after he withdrew to recover after his triumph at Roland Garros.Australian Thanasi Kokkinakis and Briton James Ward have been awarded main draw wildcards.Meanwhile, Spaniard Feliciano Lopez reached his first final in almost a year when he beat local favorite Mischa Zverev 6-7 (2), 7-6 (4), 7-5 in the battle of the southpaws on Saturday to book a spot in the Stuttgart Open final.The 35-year-old Lopez, who last made a final in August 2016, reached his fourth career grasscourt final as he prepares for Wimbledon and will face fourth seed Frenchman Lucas Pouille on Sunday.Lopez can now win his third title on the surface to add to his two victories in Eastbourne in 2013 and 2014.Pouille edged past fellow Frenchman Benoit Paire in a finely-balanced encounter where one single break in the entire match was enough for a 7-6 (5), 7-5 victory. Lopez knocked out Tomas Berdych in the semis, with the Czech becoming the latest seeded player to exit the Stuttgart Open on Friday, joining top seeds Roger Federer and Grigor Dimitrov on the sidelines.Reuters contributed to this report.