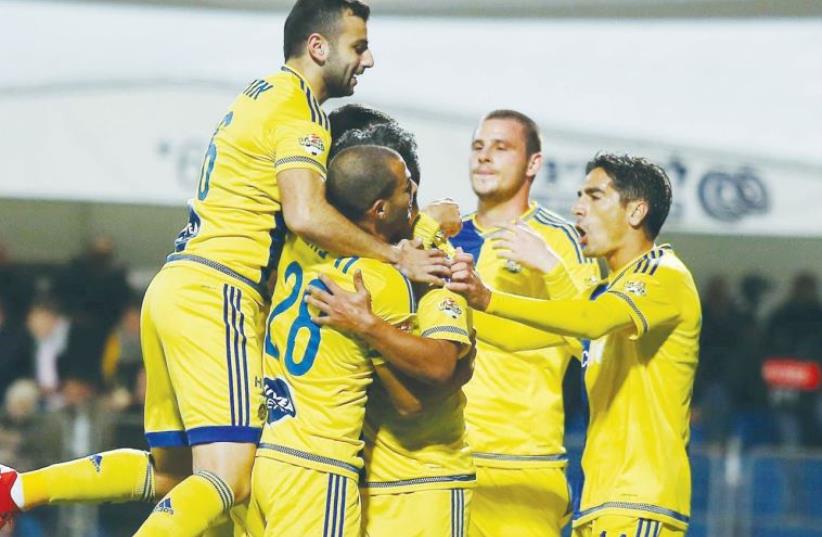 Maccabi Tel Aviv players celebrate after securing their place in the State Cup last-16
(photo credit: ADI AVISHAI)
Advertisement
The last player Hapoel Beersheba wanted, or expected, to see playing against it on Saturday was Rade Prica. The presence of the 35-year-old Swede will bring back bitter memories for anyone connected with Beersheba after scoring a hat-trick for Maccabi Tel Aviv in a 6-2 win over Hapoel in the State Cup final last season. He is set to make his debut for Maccabi Petah Tikva against Beersheba on Saturday after surprisingly returning to Israel earlier this week. Prica, who joined from Helsingborg of Sweden, played for Maccabi Tel Aviv for two-and-a-half years, scoring 24 goals in 62 appearances while winning two championships and one cup. Nevertheless, he was forced to leave last summer after his contract wasn’t renewed.“My last match in Israel against Beersheba is the best memory of my career,” said Prica on Thursday. “I hope I can reach one chance and score on Saturday.”Fourth-place Petah Tikva had gone seven matches without defeat before losing 1-0 to Bnei Sakhnin last Saturday. However, Ran Ben-Shimon’s team bounced back with a 2-0 win over Ironi Kiryat Shmona in the cup round of 32 on Tuesday.Beersheba is aiming to retain its hold on first place in the Premier League standings for at least one more week, with a win to open a four-point gap over Maccabi Tel Aviv.Maccabi visits Hapoel Acre on Monday.Beersheba enters the match on a 13-game unbeaten streak, winning 11 of those contests.Elsewhere Saturday, Hapoel Tel Aviv hosts Hapoel Kfar Saba in a significant showdown in the bottom half of the standings. Tel Aviv is three points off the relegation zone while Kfar Saba is only one point above the bottom two.Rock-bottom Maccabi Netanya will be guided by interim coach Guy Tzarfati once more when it hosts Bnei Yehuda. Reuven Atar was sacked by Netanya following last weekend’s 2-0 loss to Hapoel Haifa, with the team failing to win any of his eight matches in charge. Matters only went from bad to worse without him, with Netanya being knocked out of the State Cup on Tuesday, losing 1-0 to Ness Ziona of the third division.Also Saturday, Kiryat Shmona hosts Hapoel Haifa.Maccabi Haifa welcomes Hapoel Ra’anana on Sunday, while Beitar Jerusalem hosts Bnei Sakhnin on Monday.Mac TA final qualifier for Cup last-16 Maccabi Tel Aviv clinched the final berth to the State Cup round of 16 on Thursday night, beating Hapoel Ramat Hasharon of the National League 3-1 on the road.New Maccabi coach Peter Bosz rested several of his regular starters, including Eran Zahavi, and the yellow-and-blue was in trouble after Yossi Shivhon’s penalty in the 66th minute canceled out Barak Itzhaki spot kick opener from the 11th minute. However, it took Maccabi just five minutes to move back in front courtesy of Eden Ben-Basat before Zahavi secured the victory with a penalty in the 80th minute after coming on as a substitute 16 minutes earlier.Maccabi will face another National League team in the last-16 after being drawn to play Hapoel Rishon Lezion earlier Thursday.There will be three all-Premier League ties in the next round, including an intriguing derby between Maccabi Haifa, which knocked out Beitar Jerusalem, and Hapoel Haifa.Last season’s finalist Hapoel Beersheba faces a tough trip to Maccabi Petah Tikva, while Hapoel Kfar Saba hosts Hapoel Tel Aviv, which needed penalties to overcome Upper Nazareth of the second division.Ness Ziona, which stunned Maccabi Netanya and is the only third division side remaining in the competition, was paired with another top flight opponent, visiting Bnei Sakhnin.Elsewhere, Bnei Yehuda visits Ashdod SC, Hapoel Ra’anana welcomes Beitar Tel Aviv/ Ramle and in the only all-National League clash, Hapoel Ashkelon plays Hapoel Ramat Gan.