The national team doesn’t play its first World Cup 2018 qualifier until September 5, when it hosts Italy. 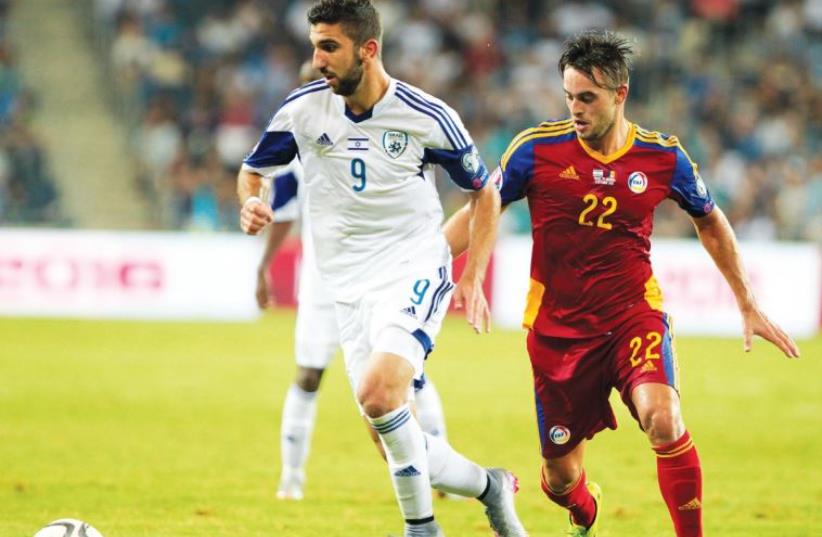 Israel striker Munas Dabbur (left)
(photo credit: ERAN LUF)
Advertisement
Israel begins the post-Eli Gutman era when it visits Croatia in an international friendly in Osijek on Wednesday, still without a full-time replacement for the previous national team coach.Under-17 national coach Alon Hazan was asked to guide the team against Croatia, with the Israel Football Association only officially beginning its search for the new head coach last week, five months after the departure of Gutman following the failed Euro 2016 qualifying campaign.The search committee announced last week that it has invited Elisha Levy, Guy Luzon, Eli Ohana, Ran Ben-Shimon and Nir Klinger to interview for the job, with the first two considered to be the favorites to succeed Gutman.The national team doesn’t play its first World Cup 2018 qualifier until September 5, when it hosts Italy.Israel’s hopes of reaching the World Cup for the first time since 1970 were already all but dashed after being paired with former World Cup winners Spain and Italy in qualifying Group G.Only the winners of each group will qualify automatically, with the eight best runners-up to advance to home-and-away playoffs.Israel will also face Albania, Macedonia and Liechtenstein.Hazan will have to manage without the injured Lior Refaelov and sick Eran Zahavi in Croatia, with the two being released from the squad on Monday.The absence of Refaelov and Zahavi increases the chances of Yossi Benayoun starting for the blue-and-white. The 35-year-old’s international career looked to be over after Gutman didn’t call him up for any of the team’s Euro 2016 qualifiers.However, the Israel appearance record holder with 96 caps, has impressed for Maccabi Haifa this season and is set to earn his first cap since the summer of 2014.In other news, former Israel national team coach Jack Mansell passed away on Tuesday.The Englishman, who made 274 appearances in the Football League as a fullback for Brighton & Hove Albion, Cardiff City and Portsmouth, was named as the Israel coach in 1980, but left after just one qualifying campaign, for the 1982 World Cup.He then joined Maccabi Haifa, but resigned after 17 league matches and returned to England.