The Israeli will return home on Monday ahead of his participation in the Israel Open, a $125,000 Challenger tournament. 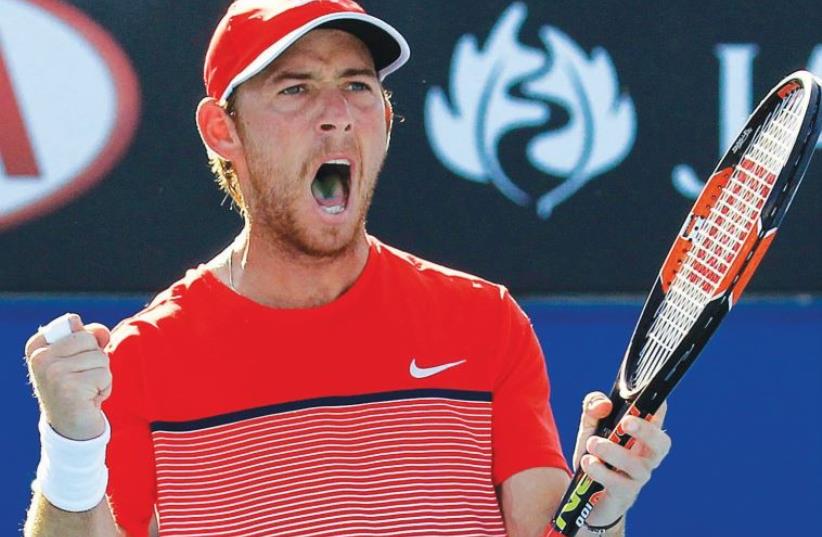 Dudi Sela claimed his 20th ATP Tour Challenger circuit title yesterday, lifting the winner’s trophy in Shenzhen, China
(photo credit: REUTERS)
Advertisement
Dudi Sela enters this week’s Israel Open in Ra’anana brimming with confidence after reaching a personal landmark by claiming his 20th career title on the ATP Challenger Tour on Sunday, beating China’s Di Wu 6-4, 6-3 in the final in Shenzhen, China.The 30-year-old Israeli, ranked No. 84 in the world, is set to rise almost 20 places when the new rankings are released on Monday morning, returning to the top 70 for the first time since March 2014.Sela, who lifted his first title of the year after falling in the final of the Challenger event at Happy Valley, Australia, in January, needed just 63 minutes to secure the victory over Wu (175), holding his serve throughout the match after winning 29-of-34 points on his first serve.Sela also closed on the all-time title record on the Challenger circuit, moving within two of Yen-Hsun Lu’s 22 triumphs.The Israeli will return home on Monday ahead of his participation in the Israel Open, a $125,000 Challenger tournament.Sela, who is the No. 3 seed and was drawn on Sunday to face Israeli wild-card Tal Goldengoren in the first round, could move into the top 60 should he do well in Ra’anana, which would be his highest ranking in almost six years.Meanwhile, Spaniard Rafael Nadal retired from his second-round match at the Miami Open on Saturday due to a bout of dizziness, while Andy Murray advanced despite arguing with an umpire after finding a women’s ball among those he was using.Sporadic boos broke out when 14-times Grand Slam champion Nadal decided he could not continue in the third set after feeling ill in typically humid conditions in South Florida.Nadal trailed 94th-ranked Damir Dzumhur 2-6, 6-4, 3-0, with the Bosnian 30-15 up on serve, when he called it a day. It was the first time Nadal had quit during a match since a quarterfinal against Murray at the 2010 Australian Open.“Everything was fine until the end of the first set,” Nadal said. “Then I started to feel dizzy, not very good. It was getting worse and worse."“I wanted to finish the match, but I seriously could not. It was tough, because I felt I was playing well. I stopped because I was concerned for my health.”Nadal twice called for a trainer, and had his blood pressure checked on the second occasion, but resumed play both times after a short break.Dzumhur was also affected by the heat early in the match and was the first to call a trainer, but he battled on and after a poor first set eventually gained control to post his first career victory against a world top- 10 player.In the night session, Briton Murray had a heated exchange with the chair umpire en route to a 6-3, 7-5 victory over Uzbek Denis Istomin.Murray faced break point at 2-2 in the second set when he noticed that a women’s ball had somehow got into the mix.Women use different balls at the Miami Open, and they have a red stamping to differentiate them.“That’s unbelievable. That’s one of the women’s balls. I could have just hit a shot with it,” Murray complained.Though the rogue ball was removed from play, Murray was clearly flustered and netted a groundstroke in the next rally to lose the game.Murray then gave the umpire another earful.“It’s not right. Do you know how different the balls are?” he asked.The umpire said he was fully aware, but could do nothing about what had happened.“The point stands. It’s the same for both,” he said.Murray then settled down, immediately broke back and closed out the match without further incident.No. 4 Stan Wawrinka was the highest seed to lose on Saturday after the Swiss was sent packing 6-4, 6-3 by Russian Andrey Kuznetsov, who saved eight break points.Serena Williams won her 750th career match to stay on track for her ninth Miami Open title when she beat Zarina Diyas of Kazakhstan 7-5, 6-3 in the third round in Florida on Saturday.The world No. 1 improved her career record to 750-125, seventh on the all-time list and just three match wins behind Lindsay Davenport’s 753. Martina Navratilova sits atop the all-time list with 1,442 wins.Reuters contributed to this report.