Windsurfing: Zubari soars back into medal contention at Worlds in Eilat

The bronze medalist from the 2008 Beijing Olympics began the day in 22nd place, but rallied to finish Thursday’s three races in fourth, second and ninth. 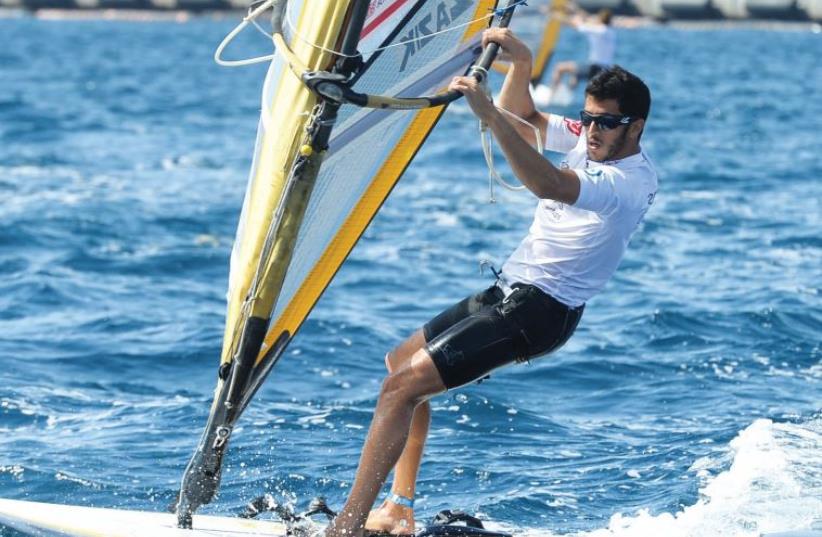 ISRAEL’S Shahar Zubari competes at the 2016 RS:X windsurfing World Championships in Eilat
(photo credit: AMIT SHISEL / EILAT MUNICIPALITY)
Advertisement
Shahar Zubari surged back into medal contention at the 2016 RS:X windsurfing World Championships in Eilat on Thursday, climbing up to third place in the overall standings with an impressive day of sailing.The bronze medalist from the 2008 Beijing Olympics began the day in 22nd place, but rallied to finish Thursday’s three races in fourth, second and ninth.With each windsurfer also shedding his worst result in the event to date following five races, Zubari catapulted up the standings.A disqualification due to a false start in the fourth race of the competition on Tuesday saw Zubari pick up 42 negative points, taking his total to 59.However, following Thursday’s developments, he is down to 32 points, good enough for third place and the same as France’s Louis Giard in second.“This was my best day of the competition so far,” said Zubari. “But it isn’t over until it’s over.”Poland’s Piotr Myszka leads the competition with 21 points.Zubari also took a significant step towards securing Israel’s lone berth in the men’s competition at the Rio 2016 Olympics after his main rival for the ticket to Brazil, Nimrod Mashiah, dropped to 23rd place on Thursday, seriously denting his hopes of qualifying for Saturday’s medal race.Following three more races on Friday, only the top 10 in the standings will compete in the double-score medal race on Saturday to decide the podium spots.“The conditions are very difficult and I wasn’t able to consistently register good results,” said Mashiah. “Hopefully I can do better on Friday and climb up the standings.A lot can happen in three races.”In the women’s competition, Israeli Noga Geller continued to impress despite dropping to seventh place (26, 11, 9). Ma’ayan Davidovich, a two-time bronze medalist in the Worlds, remained in 11th place after finishing in 21st, ninth and 10th.Poland’s Malgorzata Bialecka leads the women’s event.