Streets of miracles in southern Israel under fire

By TOVAH LAZAROFF
AUGUST 26, 2014 21:02
Damage to an Ashkelon home hit by a rocket.
(photo credit: TOVAH LAZAROFF)
Advertisement
The rooms filled with smoke and dust. The windows shattered. Rubble fell all around them. Yet somehow, all four of them emerged almost unscathed. Ofra pulled up her black pants to show that she sustained scratches and bruises from flying glass.Still struggling to comprehend the nightmarish experience, Yuval repeated the story for neighbors, reporters, police and city workers.As he stood in his house, one could see a few wooden slates and the blue sky over his head, where the roof had once been.“I do not know how we survived this. It was a miracle from God,” Yuval said.His sons sat outside by a white plastic table. Hundreds of small glass shards and dozens of pellets covered the grass and patio.White and red police tape stretched across the lawn.Passersby often stopped to take photos on their smart phones.Environmental Protection Minister Amir Peretz, who lives in neighboring Sderot, came to visit, as did a solidarity mission from New Jersey and representatives of the International Committee of the Red Cross.The Cohen’s single-family home is located next to a number of large apartment buildings.The force of the blast from the Gaza-launched rocket took out windows in many of the apartments on either side of the house and pellets left pockmarks and holes in some of the walls.Barzilai Medical Center in Ashkelon treated 79 victims from the blast, 39 of whom were lightly wounded from flying glass and shrapnel, including seven children. Another 40 suffered from shock.But on these streets of miracles, there were neither deaths nor serious injuries, just dozens of stories of close calls.In a second-floor apartment, Odelia Hazan and her twoyear- old daughter Tehila were sleeping when the siren wailed, followed by explosions. 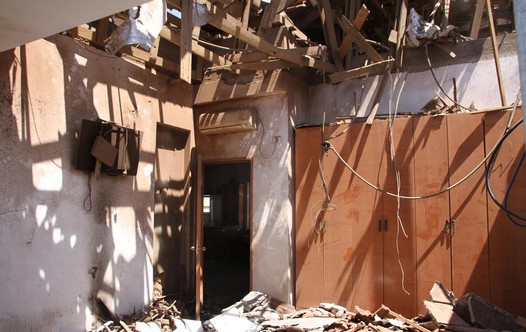 Tehila woke up and immediately held out her arms, waiting for her mother to race in, as often happens when there are sirens.“She knows what to do,” said Odelia as she described how she scooped up her daughter and raced toward the stairwell, since they do not have a safe room.She had not yet closed the apartment door behind her, when the rocket hit, taking out glass windows in her living room, bedroom and daughter’s room.Pellets bore a hole in the wall. Glass shards covered her daughter’s bed and lodged in the wall among the bright butterflies Odelia had once pasted onto the green plaster.“My daughter was saved by seconds,” Odelia’s husband, Ya’acov, said, still awed by the close call. He had already left for work, but said that he keeps thinking of what would have happened if his daughter had been in her bed when the rocket struck.Odelia said that when the blast shook the building, “I yelled and ran to the other end of the hallway, away from the explosion.”“I was in shock. I didn’t believe it was happening,” she said.Descending the stairs, Hazan worried about other residents in the building. She handed her daughter to a neighbor and began to check other apartments. In some cases, the blast damaged the doors so badly that people were locked inside, she said.As she spoke, one could hear the sound of banging, drilling and jingling, as glass was swept into dustpans.At one point, a warning siren sent her and her neighbors racing back into the hallway.When the danger had passed, the young mother surveyed her living room, where rubble covered the sofa and coffee table.“My apartment is the most damaged in the building. But I realize, I shouldn’t care. What is most important is that, thanks to God, we all survived it,” she said.