The road maps app WAZE will be updated in real time, and police advise drivers to use the app in order to navigate safely. 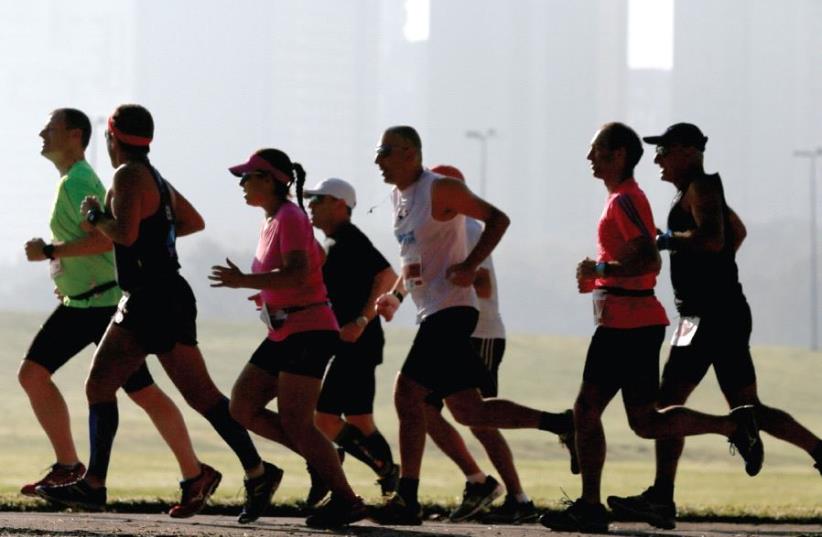 Runners warm up before a marathon in Tel Aviv, on February 26
(photo credit: REUTERS)
Advertisement
The police have been working intensively on preparing for the Samsung-sponsored 2020 Tel Aviv Marathon. The marathon started this morning and is expected to last until 1:30pm. About 40,000 runners are expected to participate in the marathon this year, and the event is being backed by 2,200 civilian and military police, as well as various voluntary security bodies. The goal of the security forces is to direct traffic before, during and after the event, as well to maintain order both among participants and spectators. A number of road blocks were put into place to accommodate the marathon route. The list of blocked off streets include: Bnei Ephraim, Rockah Blvd, Ibn Gvirol, Shai Agnon, Levi Eshkol, Propes, Highway 2040, Hayarkon, Herbert Samuel, Kaufman, Nahum Goldman, Aliyah Hashniyah, Allenby, Rothschild Blvd, Marmork, Kaplan, Dizengoff, Sderot Tarsat, and Ben-Gurion Blvd. In addition to the list of roads within the city that have been blocked off, the list of intercity roads that will be sectioned off include: Derech Namir -  from Glilot Junction to the Halacha from 8am to 11am in both directions, the on-ramp to Rockah Interchange both north and southbound from 4am to 2pm, and Merkaz Hayeridim northbound with be blocked off from 6am to 11am. It is possible that the on-ramp to Hashalom Interchange will be blocked depending on traffic conditions. Ayalon highway will remain open.Roads will be unblocked by traffic police gradually, depending on the progression of the marathon throughout the day. The road maps app WAZE will be updated in real time, and police advise drivers to use the app in order to navigate safely. Police have notified that parking is prohibited on any road that has been blocked off for traffic and any road that runners may pass through, this includes anywhere with blue and white marked roads. Violators will have their vehicles towed to the Reading parking structure. Schools will stay in session. The city asks parents to prepare accordingly.