Initial investigations indicate that the teen, a Jerusalem resident, was intending to attack police. 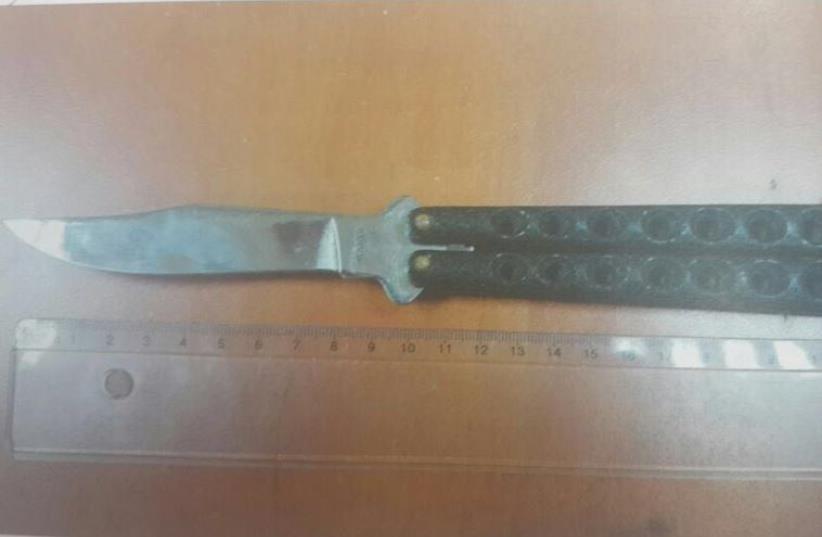 The knife found on a 16-year-old teen on his way to carry out a stabbing attack on police
(photo credit: GOVERNMENT PRESS OFFICE)
Advertisement
A stabbing attack was prevented Thursday evening in Jerusalem, after Police and Border Police officers on patrol along the light rail line in the Shuafat neighborhood of east Jerusalem found a butterfly knife on the body of an Arab-Israeli teen.The 16-year-old was boarding a bus towards the Damascus Gate of the Old City when he aroused suspicion. Authorities searched the boy's belongings and found a butterfly knife on his person. He was taken for questioning shortly thereafter. Initial investigations indicate that the teen, a Jerusalem resident, was intending to attack police.This incident comes days after a Palestinian man stabbed and slightly wounded a Jewish youth near the Old City’s Damascus Gate in east Jerusalem before being overpowered and arrested by Border Police officers after a short pursuit on foot.
According to Ch. Supt. Asi Aharoni, spokesperson for the Jerusalem Police District, a team of Border Police officers were on special patrol outside Damascus Gate at around 9:30 a.m. on Monday when they heard shouting coming from Hanevi’im Street nearby. The officers ran to the scene and saw a suspect who had just stabbed a Jewish man in the back and was fleeing toward Ben Shadad Street.Aharoni said the assailant tossed his knife to the ground as police closed in, but it was later retrieved.
x
The attacker, described by police as a resident of the West Bank in his 20s, was taken for questioning by the special investigation branch of the Jerusalem Police, Aharoni said.The victim, described as a haredi youth, was slightly wounded. He was treated by paramedics at the scene before being taken to Sha’arei Zedek Medical Center for further treatment.