Terrorism victim's wife: 'What was will never be again' 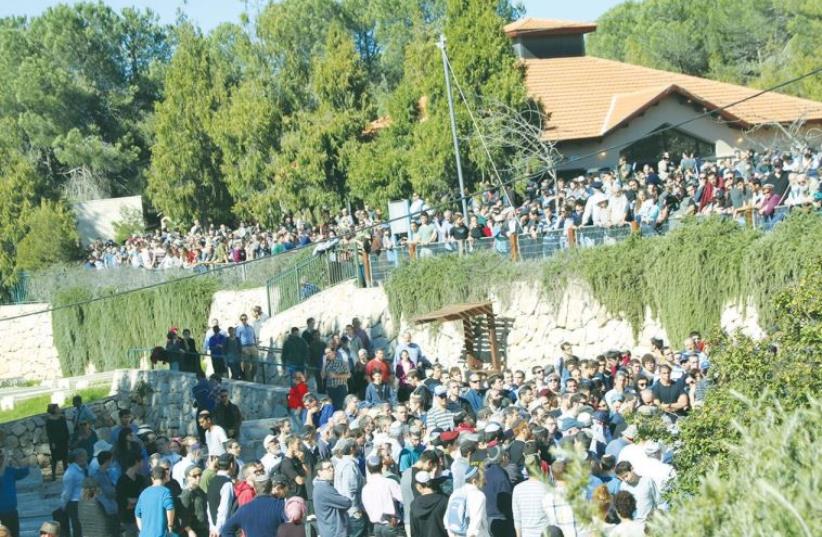 HUNDREDS OF MOURNERS attend the funeral on Friday in Gush Etzion of educator Yaakov Don, 49
(photo credit: TOVAH LAZAROFF)
Advertisement
Yaakov Don, 49, died on his way to do one of the things he loved best: to study with his sons.“Every Thursday, just like yesterday, you went to Ma’aleh Adumim to learn with Aviad and Maor. Last week, I suggested that maybe you should not go, because you were so busy. But you said you would not give it up, because it was the highlight of your week,” Don’s widow, Sara, said on Friday as she eulogized her husband of 22 years at his funeral in Kibbutz Kfar Etzion.He was one of three victims of Thursday’s terrorist attack, in which a Palestinian gunman used an automatic rifle to shoot bullets at Don’s car, which was stuck in a traffic jam near the Gush Etzion junction.The father of four had just left his home in the Alon Shvut settlement to head to Ma’aleh Adumim on the other side of Jerusalem to meet two of his sons, who studied in a yeshiva there.“Yaakov, my beloved, my sweetheart, I still can’t believe that what was, will never be again,” Sara said before her husband’s body, wrapped in a prayer shawl.“You always wanted me to speak at family events, the wedding, the bar mitzvas, and now finally, it is happening,” she said. “You always said that you were lucky that I was your wife, but I was the lucky one to have a husband who was loving, attentive, tender and warm,” said Sara.He gave everything to his family and to his students, said Sara of Yaakov, who was a beloved educator in Gush Etzion.He taught at the Derech Haavot High School in Efrat, was in charge of its social activities and worked with the Education Ministry on information and communications technology (ICT). He was in the midst of completing a doctorate in technology and education at the University of Haifa when he was killed.“In the last days, you said that you were frustrated that you were not helping out at home because of your work [on the doctorate],” Sara recalled.“But it was so not true – you gave and you gave and you gave to everyone, to your children, your siblings, your parents, your students and me,” she said.“You were happy, when we were happy. But for yourself, you didn’t want anything,” she said. “Everything you did was for your children and you always told me how proud you were of them and how much you loved them,” she said.Yaakov’s three sons spoke in tearful voices of the special relationship they had with their father, who centered his life around theirs.Yedidya, 17, said, “You were everything to me.” He explained how his father had woken up very early to drive him to his first meeting with the IDF about his upcoming army service.“I have so many memories,” he said – how they prayed together in synagogue, how his father came to his events and the drives to school.The family was already planning what presents they would give him – a coffee maker and the Book of Esther – for a joint event they were planning to celebrate both his 50th birthday and the completion of his doctorate.The oldest son, Aviad, 21, said, “I always wanted to hear your thoughts and you always wanted to hear mine. You never hated anyone. You were not angry with people. How can a person like that be killed?” he asked.His father, Aviad, said was a fundamentally happy and optimistic person. “Teach me to be optimistic in this moment,” Aviad said.At this moment, Aviad said, he needed his father more than ever to teach him how to handle his overwhelming grief.“But you are not here. I can’t understand where you are,” Aviad said. “I want to hug you close and receive a blessing from you,” he said.Maor, 19, said that the moment of he learned of his father’s death was the longest one he had ever experienced.“You were my teacher. You gave me courage and strength my whole life. We were so close.”Every Friday he would receive a blessing from his father before the Sabbath.“Today, this will be the first Friday that I won’t receive a blessing or feel my father’s embrace or be enveloped by his love,” said Maor. “How is this reality connected to our family, which is filled with love, closeness, unity and support?” To his father, he said, “You know that I loved you. It is a love that you gave to me and which will now fill me with your memories. Thank you. Goodbye, until we meet again.”The traffic was so heavy heading into Kfar Etzion for the funeral that those who came from Jerusalem could only inch forward slowly. The cars came almost to a standstill exactly at the spot where Don was killed, less than a day earlier.They also had to drive by the two bus stops where Dalia Lemkus, 26, was killed by a Palestinian terrorist who ran her over and then stabbed her to death in November 2014. And just a few feet away on the other side of the street is the bus stop where two Palestinian terrorists kidnapped and then murdered three yeshiva students in June 2014 – Naftali Fraenkel, 16, Gil-Ad Shaer, 16, and Eyal Yifrah, 19.Knesset Speaker Yuli Edelstein eulogized Don, who was a personal friend, saying this reality of living with continual terrorist attacks, as if in some kind of terrible game of Russian roulette, had to change.On Sunday, the Kiryat Arba council, whose settlement is next to Hebron, plans to hold a protest rally in front of the Prime Minister’s Office in Jerusalem to protest against the security situation.