The news in English... is over

A first-person account from an IBA journalist looking back on decades of reporting as the saga over the Authority's future draws to an end. 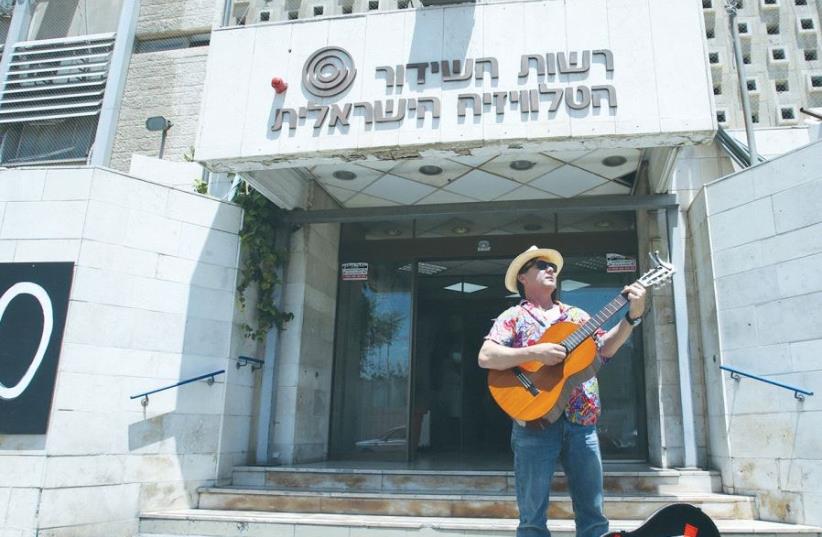 ARIEH O’SULLIVAN, ‘IBA English News’ anchor, plays the blues as the Israel Broadcasting Authority is shut down, in front of the IBA building in the capital’s Romema neighborhood
(photo credit: MARC ISRAEL SELLEM/THE JERUSALEM POST)
Advertisement
All my journalistic life I have sought out and thrived on witnessing historic events.Alas, fate turned on the Israel Broadcasting Authority and dramatically shut the lights on the small but dynamic English TV news broadcast, together with Israel TV’s flagship Hebrew-language Mabat news broadcast. We always brought the story to the viewers and never wanted to be the object of history.The IBA News’ energetic staff came in Wednesday ready to put out another 23-minute broadcast at our 4 p.m. slot on Channel 33. We knew the end was close, but were still shocked by the dramatic last broadcast of Mabat the evening before, and with a heavy heart realized we were being deprived of our chance to say good-bye to our loyal viewers.And they have been terrific.For months (years even) our viewers here and abroad had come through, sending letters and faxes to us and later to lawmakers beseeching them to come to their senses and keep English news afloat.Ever since it was announced that the new Israeli Public Broadcasting Corporation chose not to continue English TV news, we had lobbied energetically to try to make the lawmakers understand the importance of such a broadcast from an Israeli viewpoint.Just this Monday, I went personally to the Knesset’s Special Committee for Discussion on the Public Broadcast Bill. The committee secretary told me its office had been flooded with faxes and emails about English news, and although the agenda called for only debating adjustments to the law, they would let me speak.I made the pitch, saying we provided English-language news broadcast to tens of thousands of new immigrants, tourists, diplomats and more. I reminded them – with many, including MK Yaakov Peri and MK David Bitan, nodding their heads in approval – that we are living in an age when the media, especially visual, play a vital role in how our country is perceived. IBA English News presents unbiased coverage of the country and the region with an Israeli standpoint that offsets the increasingly negative foreign coverage of Israel.I told them how the new IBC had no vision, had no intention of continuing English TV news and would make due with an English radio program once a day.“Please,” I begged them. “Add the words ‘English news’ to the bill.” They smiled, said they preferred that it be considered after the new station was up and running, but didn’t want to start making amendments to the law.I realized then it was over.The IBA English News began on October 14, 1990, months before the First Gulf War when CNN would revolutionize the way television news gripped our lives. It had a prime time 8 p.m. slot on Channel 1, and was anchored by Steve Edwards, Len Brewer, Larry Price and Leah Zinder, and in time others would join.In the 27 years since its first broadcast, many good journalists have gone through here, each bringing their own style of presentation and accents, including North American, British, South African and Australian.Eventually, it was moved to the 5 p.m. slot, where it stayed for decades, as Steve Leibowitz, Dennis Zin, Robert Sarner, Kimberly Moore, David Essing, Carolyn Ben-Nathan, Efrat Batat and Sheila Zucker came aboard. Longtime anchor Yochanan Elrom (who started off as John High) became a fixture on IBA News; and others, too, such as Erin Weiner, John Elkins, Laura Cornfield, Erelle Reshef, Elli Wohlgelernter, Viva Sara Press and Brian Freeman devoted years to IBA. I came aboard in 2012 along with Margot Dudkevitch, and lately we had Calev Ben-David and Eylon Aslan-Levy.It has been a dynamic news room of the old school, like you see in movies where a production assistant will run down the hallways with a tape in hand, seconds before it’s due to be broadcast, lighting falling during shows, cameras and machines suddenly fritzing out and journalists’ news passions heavy behind the scenes. IBA News consistently suffered from lack of facilities and crew availability, but nonetheless we’re proud of our record and the show broadcast live every day.One day the dust of this upheaval will settle, and we hope English TV news will be resurrected on the Israeli Broadcasting Corporation.All of us at IBA News are sorry the curtain came down in the end... on us.Shalom from Jerusalem.