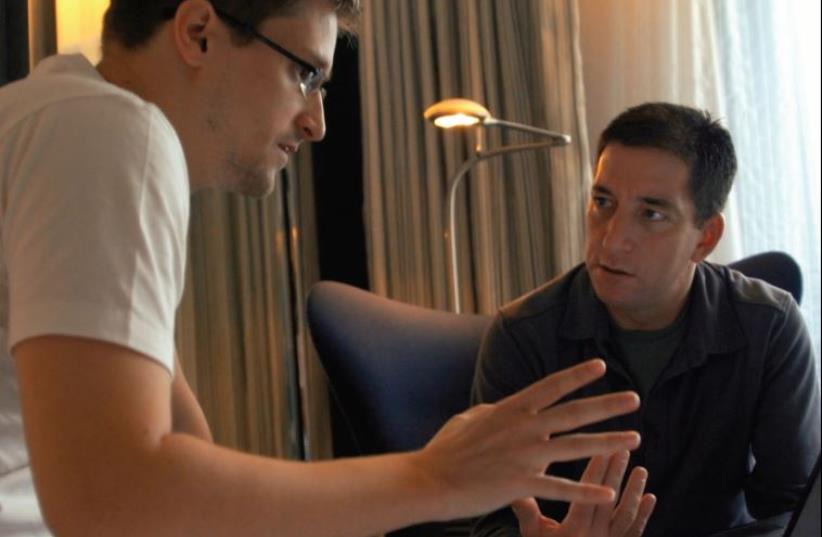 Citizenfour documentary
(photo credit: PR)
Advertisement
The documentary Citizenfour, the film about Edward Snowden and his revelation that the US National Security Agency was conducting unprecedented, widespread surveillance of American and foreign citizens, will be broadcast on Channel 1 on Monday at 9 p.m., to be followed at 11 p.m. by a panel discussion.Citizenfour, which was the opening attraction at this year’s Docaviv film festival and won the Oscar for Best Documentary, was in the news again just last week when the US Congress passed the USA Freedom Act, which, for the first time since 9/11, curtailed the power of the US government to conduct surveillance on its citizens. Many commentators traced this development directly to Snowden’s leak; and if you search the Internet for the phrase “Thank you, Edward Snowden,” you will get thousands of results.This makes Laura Poitras’s documentary Citizenfour even more of a must-watch. Poitras began to receive emails from someone who signed himself “Citizenfour” and claimed to have evidence of illegal covert surveillance programs run by the NSA in collaboration with other intelligence agencies worldwide.Together with two reporters, she met Snowden, a former CIA system analyst who had had other positions in the security establishment, in Hong Kong and interviewed him about his claims. They did get the word out, and Snowden later fled to Russia, where he was granted temporary asylum and where he remains to this day.No matter what you think about Snowden’s actions – to some he’s a hero, to many a villain – this is a fascinating story that has had a huge and swift impact on the US. Very few people have ever done anything that has had such an impact on so many people.Another movie that was popular at this year’s Docaviv Festival, 7 Days in St. Petersburg, directed by Reuven Brodsky, is being shown this week on YES Docu on June 17 at 9 p.m. and will also be available on YES VOD.Directed by Reuven Brodsky, it won the Special Jury Mention in the Israeli Competition. It tells the story of Liza, a Russian-born Israeli who hasn’t seen her son in 12 years, ever since he deserted the army. She flies back to St.Petersburg, where he is living, to try to convince him to return to Israel, where he will face time in a military prison. It’s a complex, emotionally wrenching and ultimately very moving family story.

Gone with the Wind, The Wizard of Oz, Ben Hur, The Philadelphia Story, Singin’ in the Rain – these are a few of the titles that come to mind when you think of MGM, Metro Goldwyn Mayer, arguably the greatest Hollywood studio of all time. But when you look at the listings for the MGM Channel, which is part of the basic YES and HOT cable packages, you are unlikely to see the names of any movies you’ve heard of. The studio hit hard times in the 1970s and 1980s, and after various legal settlements, the entity that is called MGM today has very little to do with the studio known for its amazing musicals and movies starring such luminaries as Katharine Hepburn, Spencer Tracy, Judy Garland, Fred Astaire, Gene Kelly, Greta Garbo, Frank Sinatra and many others. What is called MGM today still owns the rights to most of its decades-old classics but has continued to produce mediocre at best low-budget fare, which makes up the lion’s share of what is now shown on this channel.A typical offering is Mulberry St., a 2006 movie about an outbreak where “A deadly infection breaks out in Manhattan, causing humans to devolve into blood-thirsty rat creatures.”On any given day there will be maybe one or two good noir movies, such as Stanley Kubrick’s Killer’s Kiss, but they just don’t seem to have enough good movies to program 24 hours. Old movie lovers used to have the choice of Turner Classic Movies, but this channel was dropped a while back. It’s too bad because one of the best aspects of cable TV used to be the profusion of old films.