Almost a third of Israeli Jews fast on Tisha B’Av. 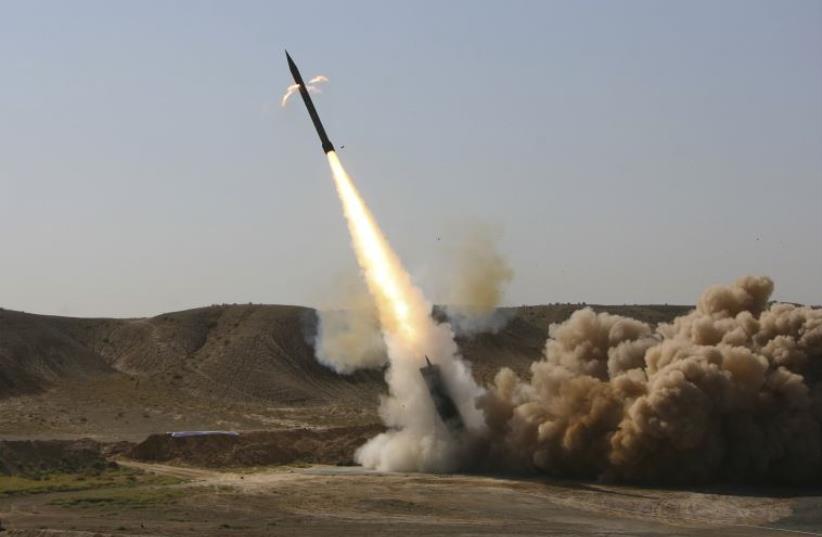 Iranian Zelzal missile launch
(photo credit: REUTERS)
Advertisement
As Jews in Israel and around the world observed Tisha Be’av, the Ninth of Av, on Sunday, a poll found that Israelis’ greatest cause for concern is a possible Iranian nuclear attack.The day is devoted to mourning the destruction of the First and Second Temples and the subsequent Jewish exile from the Land of Israel.However, this year the Israeli public was more concerned with a possible future catastrophe.In the shadow of the international agreement between Iran and leading world powers that was reached earlier this month on the Iranian nuclear program, the poll conducted for the Bible Lands Museum in Jerusalem by the TNS research group found that 42 percent of Jewish Israelis are concerned that the State of Israel may be destroyed and that the biggest perceived threat is an Iranian attack with a nuclear weapon.The poll was conducted on a sample of 500 Hebrew speakers between the ages of 18 and 65.Out of those surveyed, 41.5% of respondents said they are worried about the possible destruction of the state of Israel, compared to 58.5 who said they are not.When asked what is currently the greatest threat to the State of Israel, 27.8% of those polled said an Iranian nuclear attack, while 22.3% said internal discord within the Jewish people is the clearest danger to the state.Another 19.2% said corruption among decision makers and the political class is the greatest threat, while 14.8 percent said war with one of Israel’s neighboring countries, 10.9% said an international boycott of the State of Israel, and 4.9% said none of the above or were unsure.Notably, 43% of those defining themselves as religious said that the greatest threat is baseless hatred, meaning internal strife among the Jewish people, while 46% of ultra-Orthodox respondents said the same thing. The rabbis of the Talmud stated that the Second Temple was destroyed because of baseless hatred among the Jewish people.Some 24% of those defining themselves as traditionally religiously said that internal baseless hatred was the biggest threat to Israel along with 12.3% of secular people.The Iranian nuclear threat is the biggest concern for traditionally religious people, with 36.8% citing this danger as the most problematic, while the greatest danger perceived by 27.6% of secular people is corruption among political decision makers.The survey also found that almost one third of Israeli’s fast on Tisha Be’av, with 27.5% percent of respondents saying they fast for religious reasons and another 4.2% saying they fast for personal or societal reasons. Another 3.9% fast partially and 64.3% of those surveyed said they do not fast at all.