The deal will release 33 million cubic meters of water to the PA, relieving a serious shortage in the Palestinian territories. 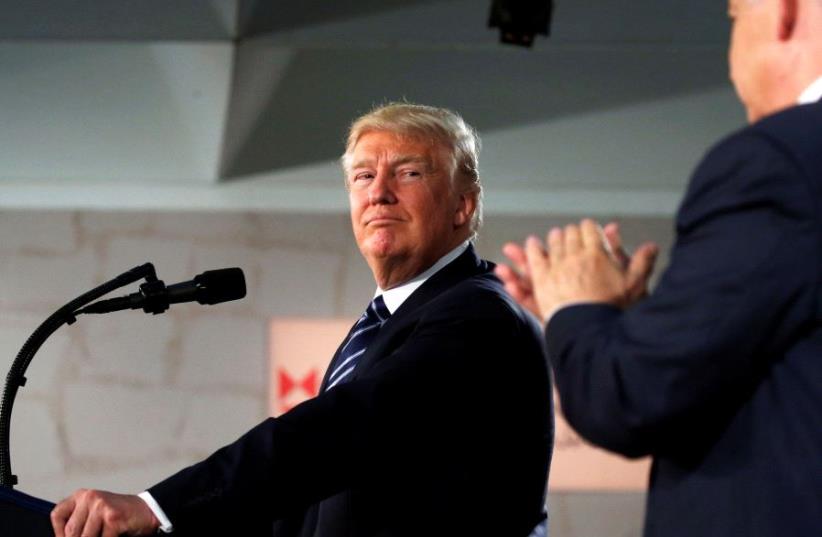 U.S. President Donald Trump looks towards Israeli Prime Minister Benjamin Netanyahu while delivering an address at the Israel Museum in Jerusalem May 23, 2017.
(photo credit: JONATHAN ERNST / REUTERS)
Advertisement
WASHINGTON -- Israel and the Palestinian Authority reached a "vital" deal on water access "under the leadership of President Donald J. Trump," the White House declared on Thursday, praising the two sides for reaching an agreement after weeks of negotiations.Jason Greenblatt, the president's special representative for international negotiations, visited the region this week to help "bridge the gaps" in talks over the dispute over allocating water from the Red-Dead Sea Conveyance Project.The deal will release 33 million cubic meters of water to the PA, relieving a serious shortage in the Palestinian territories."President Trump has made it clear that working towards achieving a lasting peace agreement between the Israelis and Palestinians is a top priority for him, and he strongly believes that peace is possible," the White House said in a statement. "The administration has urged the parties to undertake efforts to promote an environment that is conducive to advancing peace, and this new agreement– the second major Israeli-Palestinian agreement signed this week– is another indication that the parties are capable of working together to achieve mutually beneficial results."Greenblatt, at a press conference with Regional Cooperation Minister Tzahi Hanegbi and PA Water Authority head Mazen Ghuneim, said this agreement and the accord signed Monday between Israel and the PA that will significantly increase the power supply to Jenin are examples of how the two sides can cooperate to improve Palestinian living conditions.“Water is a precious commodity in the Middle East," Greenblatt said.Herb Keinon contributed to this report.