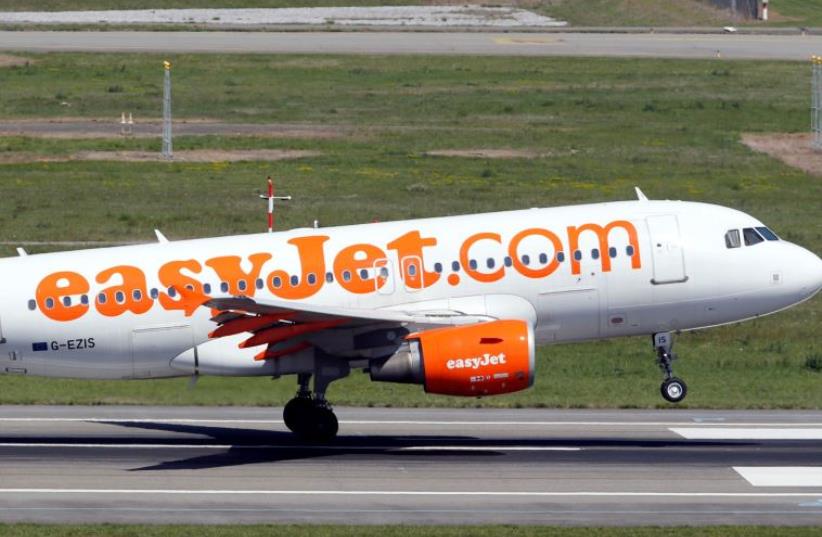 Easyjet Airlines
(photo credit: REUTERS)
Advertisement
British police were called to board a flight from Israel on Monday after a group of ultra-Orthodox Jewish men were reported to have caused an uproar because they were seated near women.The commotion allegedly started before the easyJet flight from Tel Aviv to London departed, and passengers told British media that "about ten men with black hats blocked the aisles and refused to be seated even though they were repeatedly asked to."Another passenger said that “the men were blocking the aisle, making it really difficult for other passengers to get past and take their seat."Other passengers said the rowdy offenders repeatedly rang the service buttons, angering both staff and passengers. After the women were moved from their seats, the men caused another disturbance by connecting their mobile phones to the plane's control board, which is assigned only to the crew's use. It was not clear how that incident was resolved.A flight attendant told British The Sun that it was a "nightmare flight” and that it had been his “worst in 11 years."However, upon the aircraft's arrival to London, police did not make any arrests. EasyJet issued a statement that confirmed "that flight EZY2084 from Tel Aviv to Luton on 13 February 2017 was met by police on arrival at London Luton."“This was due to a small group of passengers behaving disruptively, by not complying with the captain and cabin crew’s request to take their seats, both prior to departure from Tel Aviv and during the flight,"  the British budget airline's statement read.