The seminar, due to take place in the next few weeks, will focus on Israeli-developed life-saving techniques on the battlefield. 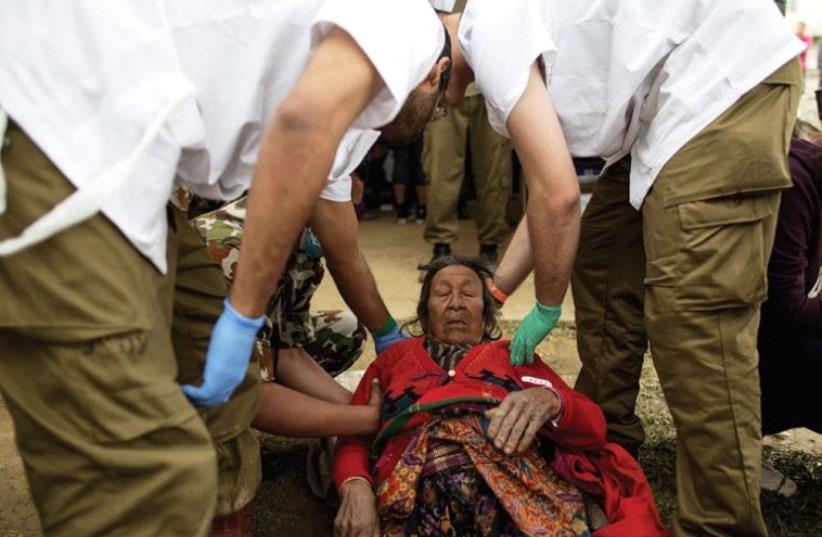 DOCTORS HELP an injured resident at the IDF field hospital in Kathmandu in 2015.
(photo credit: REUTERS)
Advertisement
United Nations peacekeepers will be participating in an upcoming field medicine seminar in Israel led by IDF and leading civilian medical professionals.The seminar, due to take place in the next few weeks, will focus on Israeli-developed life-saving techniques on the battlefield.According to Israel’s Ambassador to the United Nations Danny Danon, Israel was chosen to lead the seminar because of its expertise and advanced field medicine capabilities.The World Health Organization visited Israel in September to inspect its field hospitals with the intent to give the Jewish State the organization’s highest rating for emergency medical teams.Israel has often aided countries struck by natural disasters, including sending teams from the IDF Medical Corps and Home Front Command, providing search and rescue and setting up field hospitals in Haiti, the Philippines, Japan, Turkey, and Nepal.Israel’s field hospitals, which can be set up in under 12 hours, have 86 inpatient beds and four operating rooms In his remarks, Danon stated that, “We are very proud to invite UN peacekeeping forces to Israel, where they can learn from the world’s top professionals on the unique methods Israel uses to deal with cases involving emergency medicine on the ground.“Unfortunately, Israel has vast first-hand experience in how crucial it is to have quick and professional emergency medicine in a time of need. We hope these UN personnel will be able to implement our methods they learn during their visit to Israel into their missions and save lives around the world.”The United Nations has 16 peacekeeping missions with more than 126,000 personnel, and Israel continues to liaise with UN personnel on both the Lebanese and Syrian borders, with 927 troops on the Syrian border and another 11,345 peacekeepers on the border with Lebanon.But despite the relative calm that has been in place since the end of the Second Lebanon War in 2006, flare-ups are not unheard of.Compounding this is the presence of numerous military actors, including Hezbollah, Jabat Fateh Sham (formerly known as Jabat al-Nusra, al-Qaida in Syria) and Palestinian terrorist groups that fire rockets into Israel, drawing Israeli responses and leading to peacekeeping soldiers being caught in the crossfire.In January 2015, during a flare-up between Hezbollah and Israel, UN peacekeeper Francisco Javier Soria was killed after a barrage of Israeli artillery fire struck near the South Lebanese village of Ghajar.The war in Syria has also led to several abductions of peacekeepers, including two years ago when 45 Fijian peacekeepers were captured by the Al-Nusra Front (al-Qaida affiliate in Syria).After paying a reported $25 million for their release, the UN Disengagement Observer Force relocated the majority of its personnel patrolling the buffer zone to the Israeli side of the border.