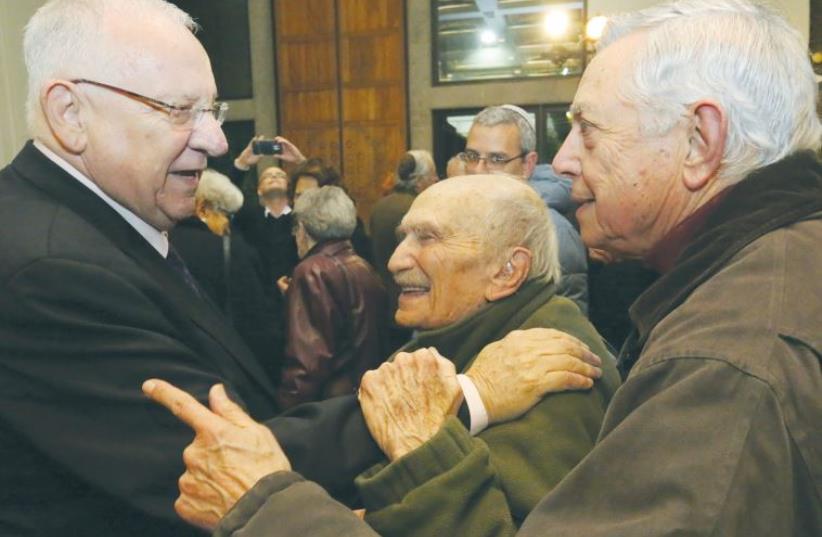 PRESIDENT REUVEN RIVLIN yesterday embraces Prof. Uzi Ornan, 93, who was his Hebrew teacher at the capital’s Gymnasia Rehavia high school.
(photo credit: YOSSI ZAMIR)
Advertisement
One of the key elements in boosting public confidence in public servants is equal representation, President Reuven Rivlin said on Wednesday at a special ceremony at the President’s Residence, in which he gave his blessing to specially chosen senior public servants who are beneficiaries of the Wexner Foundation’s program for senior public servants.The Wexner Foundation, established by American businessman Leslie Wexner and his wife, Abigail, who is a lawyer, started out with enrichment programs for American Jewish leaders and has been operating in Israel for some 30 years.Last year the foundation decided to expand its commitment toward providing the tools for excellent leadership in Israel by creating a special program for senior public service leaders in different fields, including government, health, security, diplomacy and local government. The Foundation works closely with the Civil Service Commission.Rivlin said that public confidence in public servants will be enhanced when members of the haredi community can find one of their own with whom to discuss the issues that concern them. The same goes for the Arab sector. Members of the Arab community will feel more comfortable when they speak to a public servant in Arabic.Referring to an article about what is demanded of a public servant that had been written by prime minister David Ben-Gurion, Rivlin said that even with his broad vision, Ben-Gurion could not have imagined the challenges that confront a public servant day after day in modern Israel.It is essential, said Rivlin, for public servants to gain and maintain the confidence and trust of the public. He also made it clear that equal representation should not be of a token nature but must be reflected at all levels of public life.Addressing the young leaders who will be going to Cambridge, Massachusetts, in two weeks time to spend four weeks in residence at the Harvard Kennedy School, Rivlin said that the tasks of a leader are to improve and to introduce change.The partnership between the Wexner Foundation the Civil Service Commission, which encourages excellence, is something deserving of every commendation, said Rivlin.Civil Service Commissioner Moshe Dayan concurred with Rivlin’s emphasis on equal representation, but took it a step further, saying that it must be the flagship of public service and should also include women in top-ranking positions. He was pleased to see so many women in executive positions in financial and economic enterprises, including those of government.As for all-round equal representation, Dayan said that the intention is there, but implementation is not so easy.Ido Nechushtan, a former commander of the Air Force who chairs the Wexner Foundation’s advisory committee, spoke of the collective impact of top leaders in 26 areas of public service who recently completed the second senior leadership course. Such leaders are essential in a country that prides itself on progress, he said.